From Ballerina Flats to Tutus, Ballet Has Left Its Mark on Fashion 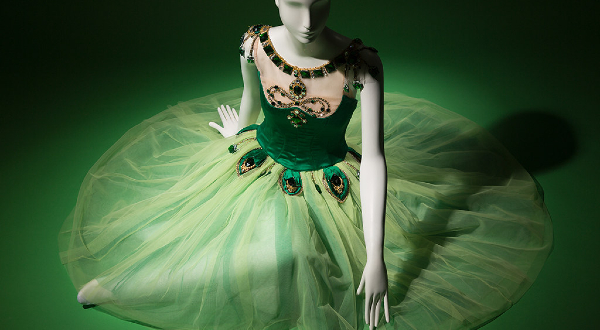 Standing center stage in her signature Dying Swan costume, prima ballerina Anna Pavlova evinced pure feminine elegance. One of the most influential dancers of the 20th century, she brought her art to people all around the world, inspiring countless young women to pursue ballet. In a definite twist of fate, Pavlova’s breakout role was later linked to her own demise: On her deathbed, she reportedly requested the costume, a symbol of life’s precious fragility, be made ready for her.

Pavlova’s iconic feathered dress, on loan from the Museum of London, is now on view in the Museum at the Fashion Institute of Technology’s (FIT) “Ballerina: Fashion’s Modern Muse” exhibition. Open through April 18, the New York City show explores the relationship between classical dance and both high-end and casual fashion, highlighting key masterpieces from these creative fields in the process.

“Ballet has enjoyed a long connection with fashion, beginning in the 1930s,” exhibition curator Patricia Mears tells CR Fashion Book’s Jennifer Sauer. “The emergence of female couturieres and the rise of women in fashion design, such as Chanel, Lanvin, Schiaparelli, and Vionnet—and later Dior and then Yves Saint Laurent’s embrace of ballet—helped position the image of the ballerina as an aspirational, idealized figure.”

Per the FIT exhibition homepage, ballet costumes have historically reflected the latest fashion trends, but until the early 1930s, this was a largely one-sided relationship. As the classical dance form gained more global attention, it was able to transcend art and enter the realm of high culture. Fashion designers took notice of the growing widespread appreciation for ballet and incorporated its styles into their creations.

The exhibit features a total of 90 items, including ballet costumes, athletic wear, and couture dresses from top brands including Dior and Chanel, reports Jocelyn Noveck for the Associated Press. High-fashion items are placed next to the ballet costumes that inspired them, allowing viewers to compare the looks firsthand.

“So [if] you’re looking at a formal gown made out of silk tulle that is covered with spangles and has a satin bodice, immediately you think of a ballerina’s tutu,” Mears tells the AP. “If you look at the flat ballet slipper, millions of women wear that kind of shoe today. And then the leotard, the leggings ... all these things have found their way into fashion. It’s ubiquitous.”

Among the items on display is a romantic evening gown by couturier Coco Chanel. This navy blue tulle dress, created in 1937, has stars embroidered into its fabric and is one of many designs inspired by choreographer George Balanchine’s 1932 ballet Cotillon.

Also on view are Christian Louboutin’s “Fetish Ballerine” shoes and garments by designer Claire McCardell, who pioneered the rise of the “ballerina shoe” as casual attire in 1942.

The history of ballet flats is thought to be intertwined with that of World War II, writes Ella Chochrek for Footwear News. “It made sense because shoes were being rationed,” explains Mears to Footwear News. “We were going into the war [and] they were going to be harder to get.” Ballet flats, on the other hand, were not rationed and thus became excellent alternatives to standard footwear.

Fashion magazines have historically depicted the beauty and elegance of ballerinas, but they were slow to acknowledge the field’s diversity—a phenomenon evident in “Ballerina: Fashion’s Modern Muse,” which presents costumes from the Dance Theatre of Harlem, a multi-ethnic ballet company, as well as artifacts connected to other trailblazing ballerinas of color.

“A dancer’s life is hard anyway, but for women of color, it was extraordinarily difficult,” Mears tells the Cut’s Katie Berohn. “The fact that there were some who could break the barrier and really have a dance career as early as the 1940s and ’50s was amazing.”

An elegant black Christian Dior dress worn by Maria Tallchief, a dancer of Native American and Irish-Scottish descent, is also on view. Tallchief was among the first Americans to break into a realm previously dominated by Russian and European dancers, enjoying a two-decade career that spanned the 1940s through ‘60s.

In addition to displaying items that highlight the connection between high couture and ballet, the exhibit connects ballet to a more recent fashion phenomenon: athleisure, or everyday athletic casual wear. Although this style of clothing may appear to be a contemporary trend, it actually traces its origins to the 1940s, when American designers began looking to dancers for inspiration and incorporating leotards and leggings into their work.

While ballet’s popularity has somewhat diminished since the 1980s, fashion is still a means through which dancers connect culturally with a mass audience. Consider, for instance, Misty Copeland, the New York City Ballet’s first African American principal dancer. As CR Fashion Book points out, Copeland is a rising icon, her likeness regularly appearing in Stuart Weitzman advertisements and Estée Lauder campaigns.

“Indeed,” explains the publication, “the future of fashion and style looks to be every bit as ballet-inspired as its modern past.”

“Ballerina: Fashion’s Modern Muse” was on view at the Museum at FIT in New York City in 2020.