The collection offers a glimpse into humans’ engagement with the monument 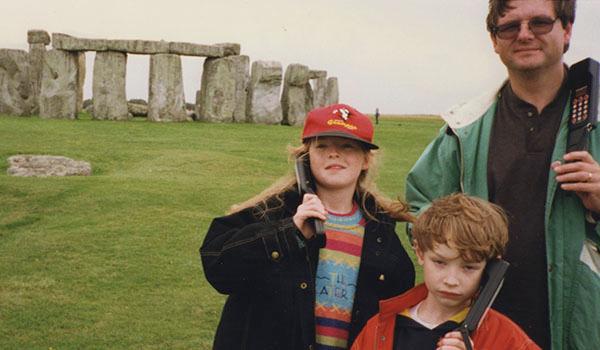 In the 1875 photograph, a bearded man stands looking at two women in a horse-drawn carriage, their voluminous skirts spilling over the sides of the buggy. Behind the trio tower the grand pillars of Stonehenge, the 5,000-year-old Neolithic monument that—as the mottled black-and-white image suggests—has long been an attraction for curious sightseers.

This picture, possibly the oldest family photograph taken at Stonehenge, is one of 148 images on display at the Stonehenge Visitor Center. Part of a new exhibition that chronicles the recent history of the site through personal snapshots, the images span 150 years, from the 1875 photo of Isabel, Maud and Robert Routh (who were apparently able to drive their horse and carriage into the center of the monument) to a 2019 shot of a couple kissing in front of the pillars, a selfie stick poised above their heads.

The photos featured in the exhibition, titled Your Stonehenge, were selected from more than 1,400 images submitted to English Heritage in 2018, reports Sarah Cascone of artnet News. (The 2019 shot is a late addition from photographer Martin Parr, who helped curate the show.) English Heritage, a charity that cares for more than 400 historic sites, had asked the public to submit Stonehenge family photographs as part of an initiative marking 100 years since the monument was gifted from private to public hands.

“Right up until the 1920s and ‘30s people did dress up for days out like this, in their Sunday best, suits and hats,” Greaney tells BBC News.

With the rise of smartphones and selfie sticks, the way people take photographs of the monument has also changed.

“[P]eople’s faces have got closer to the camera until they are taking a picture of themselves more than they are of Stonehenge,” Parr, who snapped the image of the kissing couple this year, tells Bronwen Weatherby of the Evening Standard.

But there are commonalities over the years. Stonehenge has long been a place where family and friends come together to make memories. Some of those memories are poignant: One 1941 photograph, for example, shows Joyce Lessen posing with her 20-year-old brother, Sergeant Observer Douglas Brian McLaren, who was on leave from the Royal Air Force.

“It was the last time we saw him,” Lessen says of that day at Stonehenge. “He was posted to Malta and reported missing, believed killed, during a bombing raid in North Africa on 8 January 1942.”

Other images preserve joyful moments. In a 1950 photograph, two girls pose in front of the pillars, big smiles stretching across their faces. A 1963 picture shows a group of unidentified musicians clustered around the rocks with their instruments. In a 2015 snapshot, a young man stands in front of the monument wearing just his swimsuit—or possibly underpants. He turns his head to the camera, grinning.

Yet another photograph, this one taken in the 1980s, features one Dawn Hayles posing in front of a hulking pillar with her father, Dutty Ken. They used to visit Stonehenge during the summer solstice, and in the picture, the sun is shining.