Ever wanted to add your own bursts of color to the tea party in Lewis Carroll’s Alice’s Adventures in Wonderland? Or perhaps you’d rather lend your pen to a drawing of a gruesome 18th-century arm amputation. Thanks to the latest edition of the annual #ColorOurCollections campaign, you can scribble your way through both, as well as a myriad of other scenes culled from the archives of 113 cultural institutions across the globe.

The popular initiative, launched by the New York Academy of Medicine Library in 2016, encourages museums, libraries, universities, medical schools and botanical gardens to delve into their collections and transform prints, illustrations and drawings into downloadable black-and-white coloring pages. As Artsy reports, the campaign aims to “promote creativity and to disseminate lesser-known artworks.”

This year, the five-day event—held between February 4 and 8—found institutions as diverse as the University of Glasgow Archives and Special Collections, the National Library of Russia, the Folger Shakespeare Library, and the Shangri La Museum of Islamic Art, Culture & Design digitizing selections from their collections.

Amongst the more recognizable offerings are a trio of illustrations from the British Library featuring the aforementioned Wonderland tea party, Aubrey Beardsley’s decadent Art Nouveau rendering of a scene from Oscar Wilde’s Salomé and an Arthur Rackham sketch of Cinderella arriving at the fabled fairytale ball.

Another 2019 highlight is a series of dime novel drawings from Northern Illinois University’s Founder’s Memorial Library. As Jenna Dooley of Northern Public Radio writes, these late 19th-century tales, dubbed “dime novels” for their 10-cent price tag, served as a precursor to modern-day comic books. According to NIU’s Nickels and Dimes digital portal, which allows users to explore more than 6,500 of the digitized novels, the stories introduced the masses to leisure reading, regaling readers with tales of the American frontier, detectives and similarly daring adventurers.

NIU’s 15-page coloring book deftly captures dime novels’ lively atmosphere: In one illustration, Wild West star Calamity Jane peers out at the audience with a determined look—and a rifle slung over her shoulder—while in another, an enormous winged sea monster roars at three men stranded in a comparatively minuscule boat.

Mythical creatures, as well as more scientifically accurate renderings of flora and fauna, are popular subjects throughout the collected coloring pages. The Folger Shakespeare Library, for example, features otherworldly animals based on characters from Aesop’s Fables, while the institution behind the entire #ColorOurCollections initiative, the New York Academy of Medicine, opts for detailed illustrations of a variety of plants.

Moving from fantastical fiction to the macabre world of early healthcare practices, the Historical Medical Library of the College of Physicians of Philadelphia presents a sketch by Johann Friedrich Meckel, a German anatomist who studied the relationship between genetics and physical abnormalities, and a drawing by Georg Bartisch, the so-called “father of modern ophthalmology,” depicting a man with eerily bulbous medical instruments popping out of his eye sockets.

Selections from Andreas Vesalius’ groundbreaking study of human anatomy, first printed in 1543, are available via the Ohio State University Health Sciences Library. An 1832 illustration from the Medical University of South Carolina’s Waring Historical Library spotlights a grimacing patient whose “weakly state” is the direct result of his “relentless fate,” while a 1944 Army recruitment call from the National Library of Medicine builds on a sketch of a smiling, patriotic young nurse to declare, “Nurses are Needed Now!”

The full selection of coloring pages from this year’s campaign, in addition to digitized entries from previous iterations of #ColorOurCollections, is available for download via the New York Academy of Medicine’s online portal.

If you're in search of coloring in more history, a new Smithsonian coloring book also highlights letters from illuminated manuscripts dating from 15th to 20th centuries. Look for it February 26. 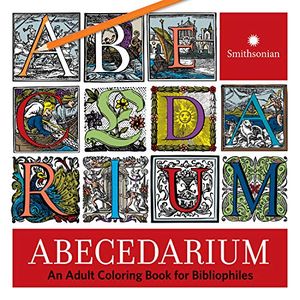 Abecedarium offers artists of all ages the chance to color the pages of history: it includes two black and white versions of each alphabetical letter for readers to personalize.