Beasts of the Northern Wild 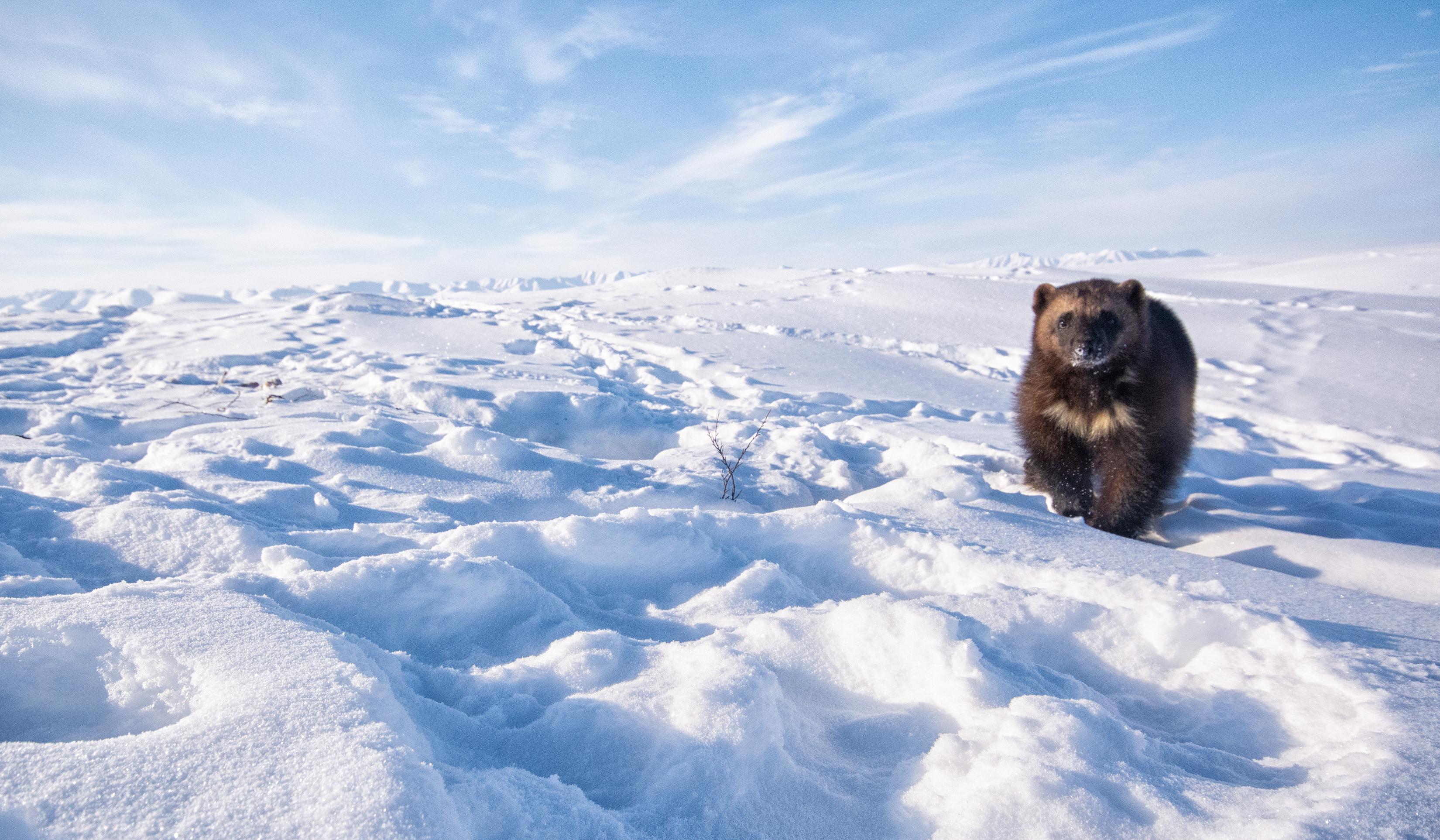 A female wolverine roams the Arctic tundra at the edge of the Brooks Range, on Alaska’s North Slope.  Peter Mather

No creature of the Far North is less beloved than the wolverine. It has none of the polar bear’s soulfulness, or the snowy owl’s spooky majesty, or even the dewy white fairy-tale mischievousness of the Arctic fox. The wolverine is best known for unpleasantness. This dog-size weasel, which grows to about 30 pounds, has daggerlike claws and jaws strong enough to tear apart a frozen moose carcass. It will eat anything, including teeth. (Its scientific name is Gulo gulo, from the Latin for “glutton.”) In some cultures it’s known as a “skunk bear,” for the odious anal secretion it uses to mark its territory. And yet, from certain angles, with its snowshoe paws and a face like a bear cub’s, it can appear cuddly. It is not. A wolverine will attack an animal ten times its size, chasing a moose or caribou for miles before bringing it down. “They’re just a vicious piece of muscle,” says Qaiyaan Harcharek, an Inupiat hunter in Utqiagvik, on Alaska’s Arctic coast. “Even the bears don’t mess with them little guys.”

Wolverines were once relatively common in the contiguous United States, but trapping and habitat loss have shrunk populations to just 300 or so animals, now mostly confined to the Cascades and Northern Rockies. Arctic populations are thought to be healthier, but the animal’s furtive nature and the vast area each one covers pose a challenge to scientists. “The effort you have to put into finding enough of them to make reasonable conclusions about the population is considerable,” says Tom Glass, a field biologist with the Wildlife Conservation Society, or WCS, which is conducting a comprehensive field study of Arctic wolverines.

From low-flying airplanes over Alaska’s North Slope, the researchers have observed that wolverines live “pretty much everywhere,” says Martin Robards, of the WCS. Dozens of wolverines trapped on the tundra by researchers and outfitted with satellite collars are revealing how the animals live. A typical day might include a 12-hour nap in a snow den, followed by 12 hours of nearly ceaseless running to find food, covering as many as 25 miles or more. Several females live within the territory of a single male, which patrols a range of 800 square miles, two-thirds the size of Rhode Island. Scientists are also testing for diseases and parasites by studying wolverines killed by indigenous hunters, whose subsistence communities prize wolverines for their durable, moisture-wicking fur, a traditional lining for winter parkas.

Glass, the WCS researcher, is particularly interested in how Arctic wolverines use snowpack—for storing food, for shelter from predators and especially for raising their kits, which are born in snow dens in the early spring. The dens are tunnel systems of surprising complexity. They might reach ten or so feet deep and extend 200 feet along a snow-buried riverbank, and will include separate tunnels for beds and latrines and others for cached food—caribou femurs, for example. Because snow dens appear crucial for ensuring the health of young wolverines, and thus future populations, the research has extra urgency. The Arctic is warming twice as fast as the rest of the planet, and the snowpack appears to be melting an average of one day earlier every other year.

Meanwhile, the researchers are getting a new perspective on the unlovable beasts. Female wolverines, which birth a litter of kits every one to three years, live with their young for about a year. “We have pictures from reproductive dens of the mother with her kits,” Glass told me. “They spend a lot of time just playing. They’ll play with each other, and then they’ll go bug mom, who’s taking a nap. It looks like a family scene from any species you can think of. They’re cute and roly-poly.”

Peter Mather is a wildlife and nature photojournalist based in Whitehorse, Yukon.