For centuries, eyewitnesses have occasionally reported seeing an inexplicable phenomenon minutes before, during or after an earthquake: strange bright lights in the sky.

Just after an 1888 quake that hit New Zealand, for instance, there were reports of “luminous appearances” and "an extraordinary glow" visible for several hours. They were spotted in 1930, during an earthquake in Idu, Japan, visible up to 70 miles away from the epicenter. Among the dozens of earthquakes that reportedly produced strange lights, their qualities varied widely: People reported seeing white flares, or floating orbs, or rainbow-colored flickering flames. The lights sometimes appeared for just a few seconds, but other times they hovered in the sky for minutes or hours at a time.

For much of modern history, these reports were considered apocryphal. It wasn't until a series of photographs of strange lights snapped during a 1965 earthquake in Nagano, Japan—including the one below—that scientists acknowledged the validity of the phenomenon. 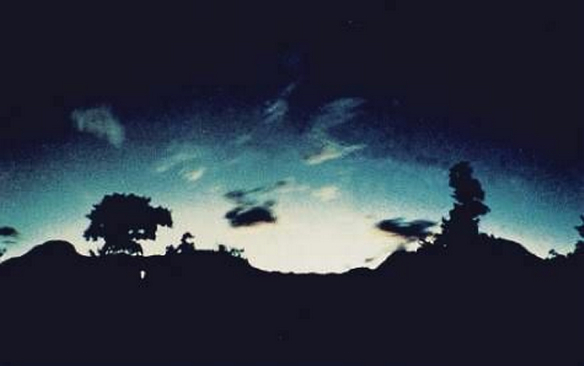 They've since been captured with greater frequency and even on video, like this clip taken 30 minutes before an earthquake that hit China's Sichuan Province in 2008:

But for scientists, accepting that earthquake lights exist presents a new problem: How do you explain them?

Over the past few decades, a variety of hypothesis have been offered. Some have proposed that tectonic movement of rocks that include quartz could generate a pizoelectric field that produces flashes of light. Others have suggested that tectonic stress temporarily allows rocks to conduct electromagnetic energy, triggering changes in the magnetic charge of the ionosphere, the uppermost level of the atmosphere. But it's extremely hard to test either of these hypotheses, because earthquakes are so unpredictable, and the conditions are so difficult to replicate in a lab.

Today, in a study published in Seismological Research Letters, a team of scientists by Robert Thériault used an alternate strategy to figuring out the answer—they analyzed the geologic circumstances of 65 earthquakes starting in the year 1600 that produced reports of light to see what these events had in common.

"We built a pretty large database of earthquakes with earthquake lights that happened around the world," says Thériault, a geologist with the Quebec Ministry of Natural Resources. "And eventually, when we started to look at them, we found a really striking pattern."

Worldwide, roughly 95 percent of seismic activity occurs at the boundaries between two or more tectonic plates. But the vast majority of earthquake lights (85 percent) occurred in association with a quake within a tectonic plate at sites of continental rifting, a category that represents just five percent of all earthquakes. Additionally, most of the remaining 15 percent occurred with earthquakes caused by two plates sliding past each other (a transform fault), rather than one plate is pushed underneath another (a subduction zone).

Additionally, the scientists found that earthquake lights appear disproportionately before or during earthquakes, rather than afterward. They don't yet have an explanation for the unusual location patterns of earthquake lights, but they think they can explain this trend in timing.

Their model, developed over the past few years by co-author Friedemann Freund of San Jose State University, also involves rocks conducting energy up to the surface, but not all the way up to the ionosphere.

"The process starts deep in the crust, where rocks are subjected to high stress levels, prior to the stress being released to produce an earthquake," Thériault says. In certain types of rock, Freund has shown in lab experiments, this stress can break apart pairs of negatively-charged oxygen atoms that are linked together in peroxy bonds.

When this happens, each of the oxygen ions are released, and these can flow through cracks in the rock, towards the surface. At that point, the thinking goes, high-density groups of these charged atoms will ionize pockets of air, forming a charged gas (a plasma) that emits light.

Tectonic stresses gradually build up for an extended period of time before being released in a quake. Their model, which relies upon this stress to create lights—rather than actual seismic activity—could explain why the lights often occur minutes, hours or even days before a quake.

As a result, they say, earthquake lights could be more than an intriguing phenomenon—they could be a vital indicator, for some, that the ground is about to start shaking. "If you see visible lights in the sky, and you live in an earthquake-prone area, they might be an early-warning sign that an earthquake is approaching," Thériault says.