In a nod to his striking bone structure, Jay Leno titled his autobiography Leading With My Chin. That also could serve as an epigram for our entire species, according to a new study of the evolution of this puzzling human feature.

We’re the only animal (except for elephants, but they’re another story) with this bony protrusion on the lower jaw jutting out beyond the teeth. Where did it come from? Some biologists say that after the chin initially arose through random genetic mutation, it stuck around and proliferated simply by chance. Others argue that natural selection actually favored the chin.

To get at the question, James Pampush, an evolutionary anthropologist at the University of Florida, studied more than 100 primate species, including humans, chimps and lemurs. Measuring jaw parameters from CT scans provided by Smithsonian’s National Museum of Natural History, Pampush found that the angles that define the chin changed rapidly during recent human evolution but not elsewhere in the primate family tree—a clear sign of evolutionary pressure. “Natural selection must have been involved in producing that very unusual chin shape,” Pampush says.

It’s often said that a chiseled Don Draper chin makes a man attractive, but the notion that the protuberance evolved to enhance mating has little basis in science. As long ago as 1916 the anthropologist T.T. Waterman argued that the chin didn’t grow because it made women swoon, or to accommodate speech or distribute the stress of chewing. Instead, the chin was a byproduct of a shrinking face. Indeed, as the first modern humans evolved, late in the Pleistocene, the face decreased in size and tilted inward, pushing part of the lower jaw outward. “If natural selection is looking to alter one part somewhere, it incidentally affects the shape of another component somewhere else,” Pampush says.

Which leads to another question: What prompted the hominid face to shrink? Reduced aggression and lower testosterone, proposes Robert Franciscus, a paleoanthropologist at the University of Iowa. Those changes, in turn, were associated with more cooperation and more social tolerance, but lowered hormone levels would have also led to a smaller face. Fossil evidence supports that trend.

So we can all keep our chins held high. It’s not so much a symbol of our vulnerability (though we sometimes lead with it) or even our virility. It’s a sign of something more crucial—our civility. 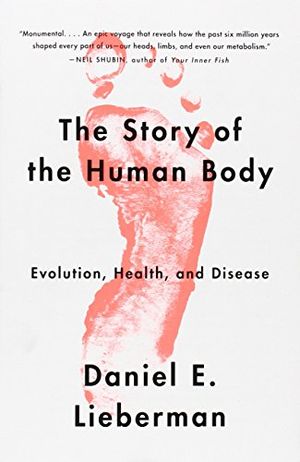 The Story of the Human Body: Evolution, Health, and Disease