Sixteen years ago, a pair of scientists introduced a new word that would shake up the geologic timeline: the Anthropocene. Also known as the "Age of Humans," the idea was first mentioned in a scientific newsletter by Nobel Prize-winning, atmospheric chemist Paul Crutzen and renowned biologist Eugene Stoermer. The duo enumerated the many impacts of human activities on the planet, outlining human induced carbon and sulfur emissions, the global run off of nitrogen fertilizers, species extinctions and destruction of coastal habitats.

Considering these vast changes, they declared the Holocene (our current 11,000-year-old geologic epoch) over. The Earth had entered a new geologic era, they said. This week, scientists are meeting to present their evidence of this new chapter of geological time to the International Geological Congress in Cape Town, South Africa.

Since it was introduced, the Anthropocene concept has resonated throughout the sciences and humanities. It's forced people to confront how, in so little time, our species has irreversibly transformed Earth’s climate, landscapes, wildlife and geology.

“Many people are using [the term] because it sums up in a word and an idea the total scale and extent of how the Earth’s system is changing because of humans,” says Jan Zalasiewicz, a University of Leicester geologist who pieces together Earth’s history using fossils.

As he watched the Anthropocene idea proliferate, he wondered whether there was some geological truth to it. Could today’s soils and sediments be distinct from those laid down in the Holocene? Are they distinct enough to name a new geologic epoch?

"The important thing is that the Earth system is changing," says Zalasiewicz. "From the point of geology, it doesn’t matter whether it’s humans causing it, or if it’s a meteorite, aliens from outer space or even my cat masterminding change to the planet."

In 2008, he gathered a group of geologists, and together they published a list of possible geological signs of human impact in GSAToday, the magazine for the Geological Society of America. The group concluded that the Anthropocene is "geologically reasonable" and warranted further investigation.

But declaring a new geologic epoch is no small task. The official inclusion of the Anthropocene would be a major revision to the Geologic Timescale—the hulking calendar of time that divides Earth’s 4.6-billion-year history into chapters. The boundaries between each of these chapters are marked by shifts in the composition of glacial ice, tree rings, coral growth bands, seafloor and lake sediments among other layered geologic formations, found consistently throughout the world. “All of these layers contain signals within themselves, which reflect the life and the times around them, the chemical, biological and physical signals,” says Zalasiewicz. If the rocks have changed, the world must have changed, too.

Perhaps the most well known boundary is that between the Mesozoic and Cenozoic—also known as the Cretaceous-Paleogene or K/Pg boundary and formerly as the K-T boundary. Some 66 million years ago, an asteroid struck the Earth and killed off the non-avian dinosaurs. Since comets and asteroids are rich in the element iridium, and it's rare on Earth, a fine layer of iridium marks this event in the geologic record around the world. On every continent, paleontologists find fossils of large dinosaurs and certain plankton species below that stripe of iridium; above it, they find a distinct suite of plankton and no traces of non-avian dinosaur fossils. The iridium layer separates the Mesozoic, the dinosaur-filled era of life, from the Cenozoic, when mammals began taking over.

Though the iridium stripe can be found worldwide, the boundary’s official location is outside El Kef, Tunisia. There, in 2006, geologists hammered a golden spike into a hillside that displayed the telltale signs of the K/Pg boundary to serve as a reference point. Ideally, each boundary between chapters on the Geologic Timescale will have its own “golden spike” placed into an existing rock face or core (from glacial or marine sediment). Strict rules govern the boundaries and golden spikes, overseen by the International Commission on Stratigraphy within the larger International Union of Geological Sciences, lest the Geologic Timescale be swept away by fads in geology or in politics.

In 2008, the IUGS contacted Zalasiewicz with the request that he form a new committee to look into the idea of the Anthropocene. He gathered a diverse set of researchers, including geologists, climatologists, chemists, paleontologists and historians, dubbing the crew the Anthropocene Working Group (AWG). Over the past eight years, they furiously compared notes and gathered data to make their formal recommendation for the start of the Anthropocene. The group tallied up the various proposals to choose the one that best fit, publishing a summary of their work earlier this year in the journal Science.

The signal that received the most attention was the radioactive fallout from nuclear tests, which left a prominent layer of plutonium in sediments and glacial ice. Even though thermonuclear weapons were not tested everywhere in the world, their evidence is global. “Once the fallout could get into the stratosphere, it was then distributed right around the planet very quickly over weeks or months,” says geologist Colin Waters of the British Geological Survey and secretary of the AWG. “Plutonium is barely present naturally; it’s very, very rare. So as soon as you start to see this increase, then you know that you’ve got 1952.” The radioactive signal disappears in 1964 after countries agreed to test nuclear devices underground.

A number of other signals also cluster around the year 1950 in what the AWG calls “The Great Acceleration,” when human population, resource use, industry and global trade took off. It’s then that many anthropogenic signals that once were local became truly global, and perhaps global enough to signify the Anthropocene. Here are some of those signals:

Some human impacts aren’t yet visible in sediments, but could plausibly leave signals in the far future. For instance, people have extensively transformed Earth itself. We dig mines, landfills and foundations for buildings; we build dams, docks and seawalls, which alter water flow and erosion; we quarry and transport rock around the world to construct towns and cities; we churn and move topsoil for farming. Future paleontologists could find these man-made materials compressed into an unusual rock layer that would be conspicuously Anthropocene.

Then there are the future fossils left behind by today’s plants and animals—and those that will vanish as species go extinct. Any hard-bodied animal that sports a shell or is held up by bones has a chance to leave a fossil upon its death.

If we are in the midst of a mass extinction, which some scientists believe we are, the disappearance of common fossils could be another indicator. But this would be a messy signal with different changes taking place at different times around the world. “It’s a more complicated signal simply because life is more complicated than the average radionucleide or carbon isotope,” says Zalasiewicz.

Interactive: What Will Mark the Anthropocene?
Illustration by Maya Wei-Haas; text by Hannah Waters and Maya Wei-Haas 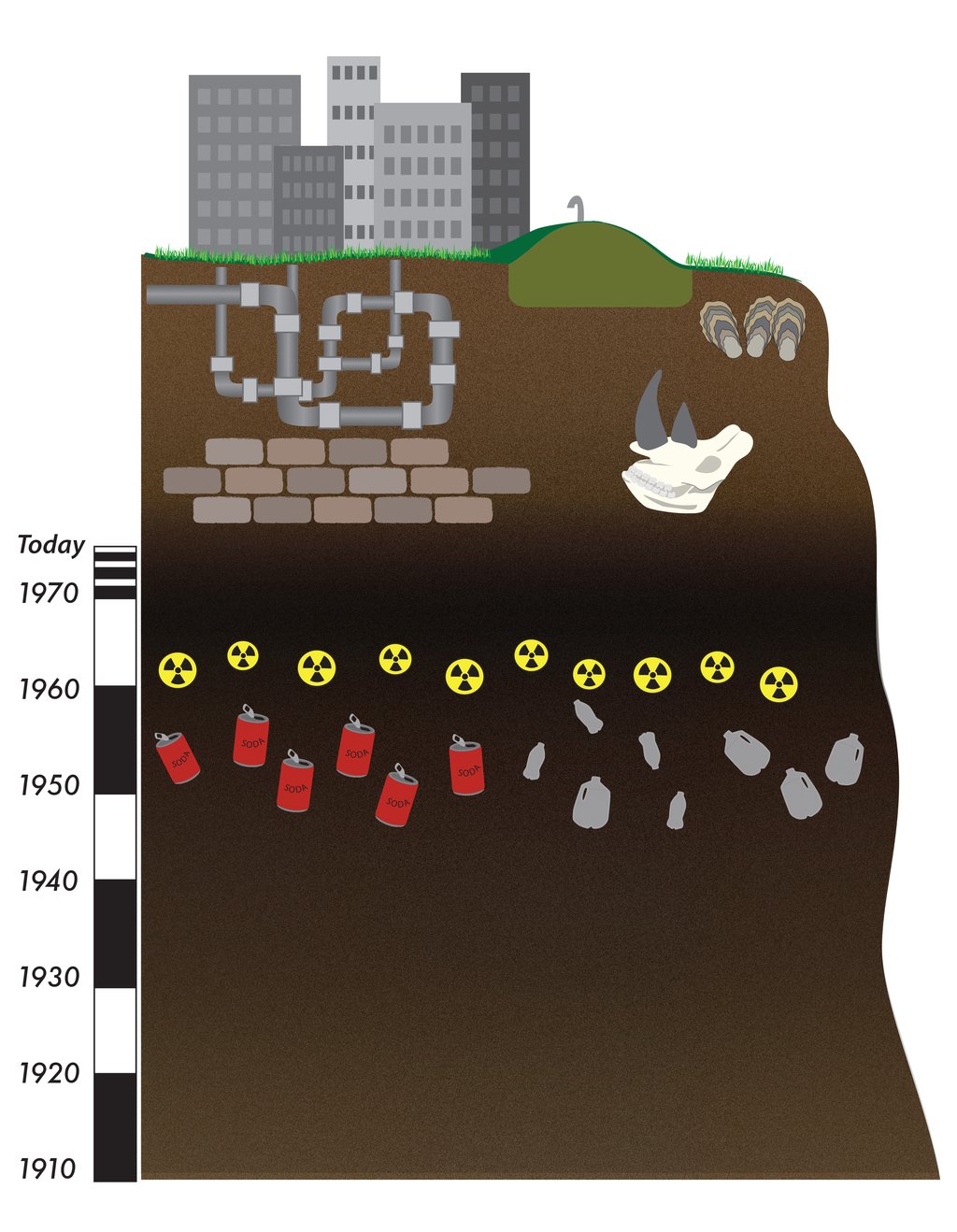 Another option are the fossils from the species that dominate after extinctions, such as invasives, which might leave a cleaner signal. Zalasiewicz is currently leading a team that is studying the Pacific oyster, which was introduced from the Sea of Japan to coastlines around the world during the past century. It’s both abundant and likely to fossilize, giving it strong potential as an Anthropocene indicator.

“Where [the Pacific oysters] appear they will be a new element of the biology and therefore future paleontology in those strata,” he says. “But again because humans have transplanted different species at different times around the world, it’s a complicated or messy signal.”

These findings are all play into the AWG's presentation this week at the IGC. They originally hoped this presentation would coincide with their official submission on the Anthropocene to the International Commission on Stratigraphy. But after speaking with geologists on the commission, they decided to wait. “It’s clear that the community would be more comfortable and feel rather more grounded with a traditional golden spike type definition,” says Zalasiewicz. Collecting evidence of signals isn’t enough; they need to identify a location to hammer in the Anthropocene golden spike.

The group isn’t yet sure where they’ll place it; they’re eyeing sediment cores from the deep ocean or remote lakes where the layered signals are clear. But finding a good core comes with its own set of challenges because the layer of Anthropocene sediment is very thin. “If you went to the deep oceans, you might be talking about a millimeter or two of sediment,” says Waters. “All you need is a bivalve to crawl across the seabed and it’ll churn up the whole of the Anthropocene in one go.” In many places, trash or fishing trawls have already obliterated any potential Anthropocene layers.

The work of identifying a golden spike location will likely take years. The researchers may need to go out into the field, drill for sediment cores, and do complicated analyses to prove that the signals are consistent and global. Up to this point, AWG members have been doing this work on their own time; now they’ll need to find funding in order to devote themselves to the effort.

Zalasiewicz groans at the thought of it. “Writing grant applications is one of the world’s great soul-destroying jobs,” he says. But to stake a geologic claim to the Anthropocene and bring the world’s overseers of the geologic time scale to a vote, a bit of soul destruction may be worth it.

“The current signals that are forming are quite striking to us already, even if humans died out tomorrow,” he says, a mark will likely remain in the geologic record in the far future. “A case can be made that it can be separable as a geological time unit. We cannot go back to the Holocene.”