Pterosaurs - those winged lizards that dotted the Jurassic skies like seagulls in a sunset - have been radically reimagined in a recent paper in the open-access journal PLOS One. 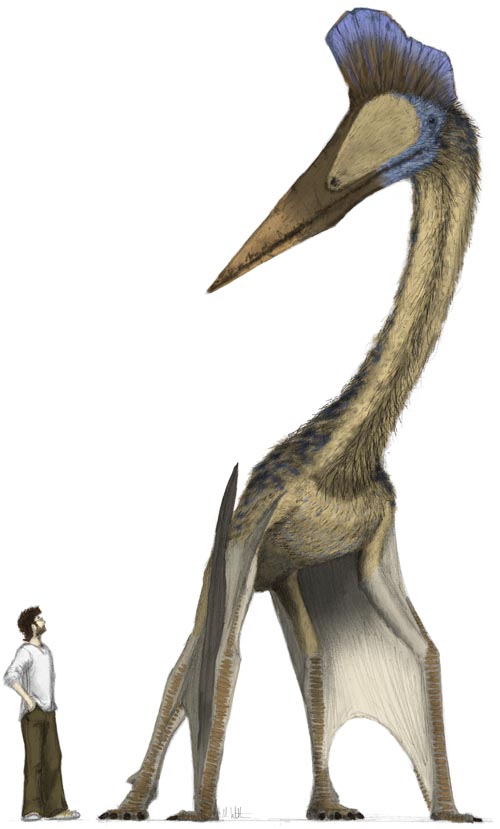 If you read the same dinosaur books as me, you probably think of pterosaurs as sort of giant, reptilian bats: rubbery-winged gargoyles that swooped low over swampy, (parrot-infested?) lagoons, snapping at fish with long, bony beaks.

But paleontologists Mark Witton and Darren Naish think this may be the wrong picture, at least for the largest pterosaurs, including the giraffe-sized Quetzalcoatlus. Its beak was too bulky and its neck too stiff for snatching fish on the wing; and its feet were too dainty to keep all that pterosaur bulk from sinking into the mud (if, as another popular guess holds, Q patrolled muddy shores like an overgrown sandpiper).

Instead, the pair thinks the creatures stalked through grasslands on all fours, snapping at smaller reptiles and insects much the way storks feed today.

The drawing above is an even bigger pterosaur called Hatzegopteryx. Other news outlets carried Witton's drawings of Quetzalcoatlus on the wing, or snarfing baby dinosaurs. I like this drawing, though. It gives you a certain sense of... vulnerability.

Check Witton's Flickr stream for more great art, as well as a lively retelling of how he and Naish developed their new idea. My favorite part: Witton first got the idea during lulls in his part-time job as a dishwasher:

At such times, your mind tends to wander, and you end up doing some rather strange things. Like, for instance, using your dishwater to experiment with different types of aerial predation of pelagic organisms. I did them all: skim-feeding, dip-feeding, diving…

As a former professional dishwasher, I'd just like to say: Mark, you've done us proud.