If you think New York City has the nation’s biggest rats, you’re wrong. Florida wildlife officials are currently tussling with 6-lb, cat-sized Gambian pouched rats that were imported as pets and then released into the local ecosystem.

The Gambian rats, used as land mine detectors in Africa, began populating the Keys about eight years ago, and local enforcers are now starting the last phase of a two-year-long eradication campaign. They’ve set out about 1,000 traps baited with peanut butter and anise in hopes of stopping the rats from infiltrating the Florida mainland. Florida's hot, humid weather makes it a welcoming home for exotic animals, like the 13-foot Burmese python found in the Everglades in 2005 with an alligator in its belly. 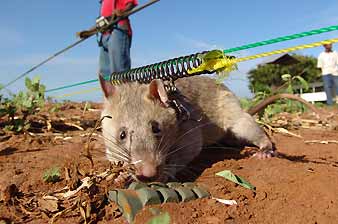 In other invasive species news, environmentalists are calling on Congress to stop all ocean vessels traversing the Great Lakes to reduce the introduction of foreign flora and fauna. About 180 non-native species, including the pipe-clogging zebra mussel, have already been introduced to the lakes, most often by ships discharging ballast water.

National legislation to treat ballast water has been stalled for five years, The Washington Post reported, but environmentalists want it up for vote ASAP. Who can blame them? Controlling species and cleaning up the damage they cause costs the US nearly $137 billion a year.