Has a gull ever snatched a French fry from you, or made a dive at your sandwich? Would you have been more, or less, annoyed if you found out that the bird knew exactly when you would appear, and was in effect lying in wait? Scientists in Bristol, England, recently discovered that Lesser Black-​backed Gulls predictably showed up at a school just before snack time and lunch, waiting in large numbers on nearby rooftops for the opportunity to snag food from the students. The birds also visited a waste center at the appropriate time of day for freshly dumped garbage, capitalizing on weekends when humans were scarce and hence less likely to disturb them. Both of these behaviors are strikingly different from the techniques gulls typically use when searching for fish or other prey, and both only appear in urban gulls, illustrating how some creatures, at least, can thrive in human environments.

The gulls’ predictive ability is impressive, but it is just the latest indication of birds behaving in a manner that can only be described as intelligent. Move over chimpanzees, dolphins, and even bonobos. Apes and cetaceans doing clever things is so mid-​2000s. The new geniuses are birds, especially parrots and corvids, members of the crow family. An African Grey Parrot named Alex learned about 150 words, not merely repeating them but seeming to know what they meant, and could categorize objects by color and size. When he died at the age of 31, his obituary appeared in the New York Times. Even pigeons, which don’t seem especially thoughtful, can memorize more than 700 different patterns, and can classify objects as either “human-​made” or “natural.”

In case that seems too studious, consider Snowball, the dancing Sulphur-​crested Cockatoo. This bird rocketed to YouTube fame with his ability to move along to the beat of pop songs. Standing on the back of an armchair, Snowball produced 14 distinct dance moves. The authors of a paper examining his behavior note that these were spontaneously generated by the bird, rather than copied from his owner, “who does not make a wide range of movements when dancing with Snowball and tends only to engage in head bobbing and hand waving” (which is an accurate description of a lot of people’s dance moves, in my experience).

Psychologists think responding to music with movement is a sophisticated form of behavior, and it is intriguing because it does not seem to be necessary for a parrot’s existence. Rhythmic movement in response to sound has also been noted in chimpanzees, which sometimes perform “rain dances” in the wild at the start of a storm.

Sulphur-​crested Cockatoos have also featured in recent headlines because of a behavior that is less charming than dancing: raiding trash bins. A study published in 2021 by researchers in Germany and Australia established that cockatoos in suburban Sydney, which have long eaten the city’s discarded food, are not just opportunistically scavenging but using complicated maneuvers to open the bins and get at the food inside. Flipping over the heavy lids requires a series of steps, from prying open the lid to walking around the edge of the bin. Only a minority of the birds have mastered this process. The technique varies among different neighborhoods, and the scientists concluded that the birds are learning how to raid trash from others, with location-​specific idiosyncrasies developing as the cockatoos ​observe their companions.

What does it mean for birds to be able to do things that we used to attribute only to our closest relatives, like apes, or to animals like dolphins that we already knew had outsized brains for their body size? Do certain behaviors make some species smarter or more adaptable than others, allowing us to arrange animals in a hierarchy of intelligence?

Tool use has long been a hallmark of advanced cognitive ability, and it was also long thought to be restricted to humans. Then chimpanzees were found to use tools, and now we know that some birds use them too. Take New Caledonian Crows. They look like your average crow, with glossy black plumage and a stout beak. They live in the forests of New Caledonia, a group of islands in the Pacific Ocean near New Zealand, and eat a wide variety of foods, including seeds and insects hidden inside dead wood and at the base of palm trees. In the early 1990s, biologist Gavin Hunt saw the crows using tools to help them forage. In addition to using twigs with hooked ends, the birds took leaves from Pandanus trees, which look a bit like palms, and modified them, biting off bits to create a kind of saw. The birds used both the twigs and the leaves to fish prey out of crevices.

Although tool use by animals had been described before, the New Caledonian Crows take things to a different level. First, they make tools that are highly consistent, like a craftsman would. Second, the different tool types are shaped in a particular way, with only the narrow end of leaf tools being inserted into crevices. Third, the crows use the hooks to grab onto their prey and lift it out, rather than simply to poke at it. Hunt points out that this level of sophistication wasn’t seen in humans until after the lower Paleolithic era, somewhere between 1.5 million to 200,00 years ago, after other aspects of material culture had already developed. Individual crows seem to learn how to manufacture tools from each other, rather than figuring out the process anew each time, something that is facilitated by living in groups of several birds.

Since Hunt’s observation, some of the crows have been brought into captivity and studied at universities all over the world. Something of a cottage industry examining their tool use and overall cognitive ability has emerged. Researchers have used phrases like “behaving optimistically” or using “mental representations” to describe the crows’ achievements. From a behavioral biology standpoint, they read like doting parents raving about the abilities of precocious toddlers.

Scientists house the birds in aviaries and present them with puzzles that require them to use increasingly complex tools, and to do so in ways that would never be found in nature. For instance, one female crow named Betty took a wire, bent it into a hooked tool, and lowered it into a tube to retrieve a piece of pig heart (a favorite food), although wire is obviously not a part of the birds’ environment and she had never encountered wire before. (She is particularly amusing to watch in videos, as she cocks her head and industriously bends a wire with her beak while holding it in her foot.) The birds can even use one tool to get another tool, which in turn is employed to get food, even when the eventual use of the tool isn’t apparent at the time they take it. The latter task may require the birds to mentally “picture” the outcome of their efforts, an ability that was thought by many to be restricted to humans, and is still considered to be controversial when applied to the crows.

Since New Caledonian Crows use tools in the wild, perhaps it is not surprising that they can extend their skills to a more artificial situation. But other species of birds can use tools in captivity even though they never do so under natural circumstances. For example, ravens, which are members of the crow family, were given a choice of objects, only one of which could be used to retrieve food from a box. The birds chose the appropriate tool even if they had to store the tool to be used another day. They could also use tokens that could be exchanged for food in a way that researchers claimed showed the birds’ understanding of the future, an ability previously thought to occur only in humans and apes. Some scientists have questioned this conclusion, as with the tool-​to-​get-​a-​tool research on the New Caledonian Crows, but the birds clearly have a complex understanding of the consequences of their actions.

What do we make of these skills? As an evolutionary biologist, people sometimes ask me which animals are most intelligent, as if we could construct some kind of zoological IQ test with humans at the top and other species arrayed neatly below. Everybody has their favorites: Raccoons! Octopuses! Parrots! Elephants! And don’t get me started on dog owners’ conviction that their pets are all candidates for Mensa.

But this impulse is wrongheaded, not because animals lack amazing abilities but because evolution doesn’t produce a hierarchy in which some species are more advanced, or rank higher, than others. Animals aren’t like cars, in which the latest model is an improvement, however slight, on the one that came before it. Humans have goals, but evolution doesn’t. Everything that is alive today is just as evolved as everything else. Some species, like crocodiles or cockroaches, may look more like their ancient ancestors than others, but that resemblance or lack of it simply shows that natural selection changes some characteristics more quickly than others. In the case of crocodiles and cockroaches, they’ve evolved successfully in the only way that counts: enough to reproduce and survive. 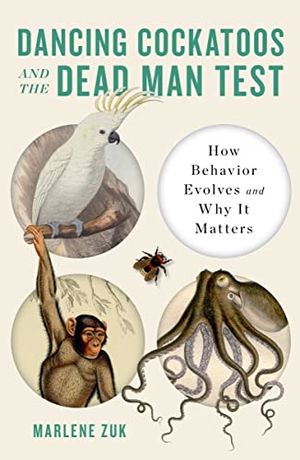 Dancing Cockatoos and the Dead Man Test: How Behavior Evolves and Why It Matters

Evolutionary biologist Marlene Zuk details fascinating behaviors across a wide variety of animal species and explains how genes and environment have worked together to shape them.

Back to the smart birds. My feeling is that behaviors such as tool use—and dancing—look impressive to us mainly because we can do them too. But all that gets us is circular reasoning: We think we’re intelligent, and hence animals that are like us must be intelligent, which means—well, I’m not sure what it means, other than that we’re good at picking out human-like attributes in non-humans. We could just as well form a club based on the remarkable ability to fly, or to hibernate, but because humans wouldn’t belong to either, perhaps it’s not surprising we have less interest in categorizing animals according to those abilities.

Instead, what the extraordinary capabilities of birds—​and I do not deny that they are extraordinary—​tell us is that different animals with a common ancestor millions of years in the past evolved similar solutions to common problems. Evolution operates by favoring, maybe infinitesimally, a behavioral variation that makes its bearer more likely to reproduce. That’s it. If that variation allows for fiddling with a stick, so be it. I find it more interesting to consider how birds’ cognition and ours came to resemble each other than to seek a mirror in the animal world.

Excerpted from Dancing Cockatoos and the Dead Man Test: How Behavior Evolves and Why It Matters by Marlene Zuk. Copyright © 2022 by Marlene Zuk. Used with permission of the publisher, W. W. Norton & Company, Inc. All rights reserved.

Marlene Zuk is a professor of ecology, evolution and behavior at the University of Minnesota and the author of Paleofantasy and Sex on Six Legs, among other works.