One catch in trying to cover the wide world of science with just two Gist posts weekly is that follow-ups can take a while. So if you've been worrying yourself sick over the fate of the pandas of Wolong or the terrifying 7-minute ordeal of the Phoenix Mars Lander, here's an update. 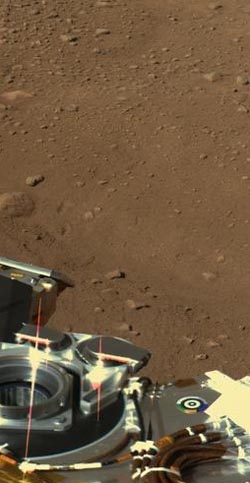 The pandas, it turned out, were not quite as well off as they appeared to be in the first few days after the tragic Chengdu earthquake. Two pandas were injured and six went missing, in addition to nearly 100 people that were killed or injured in and around the Wolong research center. The Chinese government had to ship in more than two tons of emergency panda rations, including bamboo, apples, soybeans and eggs.

At the same time, eight two-year-old pandas were removed from Wolong and taken to Beijing, where they will be mascots for the upcoming Summer Olympics. The Associated Press has a short video of the pandas' arrival in Beijing, complete with charming bamboo munching. Meanwhile, the Wolong center struggles to recover after landslides demolished several buildings. Luckily, all the pandas are alive and accounted for, if somewhat unnerved by the ordeal. The Xinhua newspaper reports that some are benefiting from "psychological counseling." We're still sending warm wishes to the pandas - and humans - of Sichuan.

The news coming from the north pole of Mars is decidedly more upbeat. This particular Gist-er spent a critical seven minutes of Memorial Day weekend watching the landing on NASA TV (anyone else? anyone?). The footage consisted mostly of people in blue polo shirts standing around a control room, listening to a countdown delivered by an Austrian-accented announcer. But it was still somehow gripping, if only because something like a remote-control landing on another planet could possibly sound so routine.

After touchdown, the news came fast and furious. In a masterstroke, the Mars Reconnaissance Orbiter snapped a shot of Phoenix on its way down, parachute open. We landed on a broad, frost-heaved plain that was suitably red. A minor hitch in radio link on the second day merely reminded us (was it a stray cosmic ray, perhaps?) of how delicate these space operations are. On the third day, out came the robotic arm. It was minus 111 degrees Fahrenheit out there.