From the discovery of a giant coral reef pinnacle to a shocking estimate of plastics on the seafloor, these were the biggest marine moments of the year 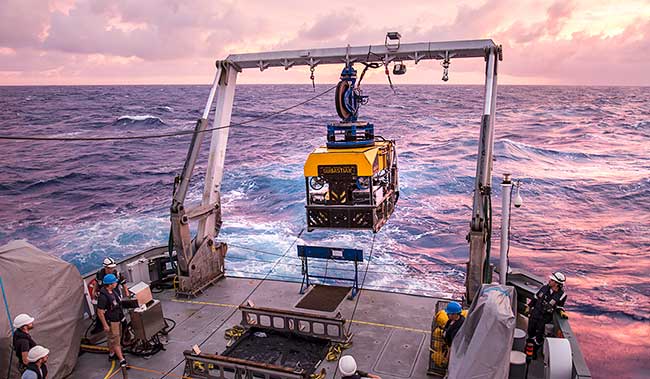 The year in ocean news was filled with stories that inspired awe and wonder, including one on the discovery of new species of squid and another on a broken underwater record set by a whale. But more sobering events also occurred, including a shipwreck that caused a devastating oil spill in the Indian Ocean. And scientists exploring the deep made key finds, such as a spiraled gelatinous creature that may be the biggest animal on the planet. In order to remind you of the biggest saltwater moments of the past 12 months, the National Museum of Natural History’s Ocean Portal team has rounded up the ten biggest ocean stories.

In July, a Japanese tanker ran aground on a coral reef off the coast of Mauritius and an estimated quarter of the ship’s 4,000 tons of heavy bunker oil leaked into the surrounding ocean. Though the spill wasn’t one of the biggest in recent years, it made headlines because it occurred in a sensitive hotspot of biodiversity. The oil entered two UNESCO Ramsar sites, wetlands of international importance, including the Blue Bay Marine Park reserve that forms the basis of Mauritius’ tourist-based economy. The coral reefs, mangrove forests and seagrass beds in the affected area will all likely suffer significant damage, including species die offs and chronic health issues. Residents of all ages took it upon themselves to help steer the oil away from shore by building booms made of clothing, plastic bottles and sugar cane leaves. The tanker’s company aims to complete oil cleanup by January, but as seen in other notorious spills, the damage to the ecosystem will likely continue for many years.

An invisibility cloak may seem like a disguise suitable for only science fiction or fantasy, but a few deep sea fishes get close to the real thing. Smithsonian and Duke University scientists found ultra-black fishes—like the Pacific blackdragon, the anglerfish and the black swallower—have a special arrangement of black pigments within their skin that absorb at least 99.5 percent of light. For comparison, black construction paper only absorbs 10 percent. Why would a fish that lives in a place void of sunlight resort to such tactics? Deep sea creatures commonly produce flashy displays of bioluminescence to attract prey, so an ultra-black skin can help fish in the vicinity avoid illumination. Ultra-black coloration can even help hide a predator fish from its own light. This oceanic discovery may spark innovations including ultra-black materials that could be used as camouflage for night ops.

The ram’s horn squid’s unique shell often washes ashore on beaches, but before now, scientists had never seen a living individual. While surveying deep sea regions of the Great Barrier Reef, the Schmidt Ocean Institute's remotely operated vehicle SuBastian captured video of the squid about 2,790 feet below the surface. While most living squids have an internal hard-shell remnant known as a pen, the ram’s horn squid has an internal shell shaped more like the external, coiled shell of its cousin the nautilus. The squid swam with its head facing up toward the ocean’s surface, the complete opposite of how scientists believed the animal moved. Often, a shell is used as a floatation device atop the body. The chambered shell works like a submarine’s ballast system, with fluid and gas passing between chambers to adjust internal shell pressure as depth changes. The ram’s horn squid’s perplexing reversal of convention is fitting for an animal that has avoided detection until now, and scientists hope to learn more about how it is able to swim with such a body structure.

A Whale Shatters an Underwater Record

A Cuvier’s beaked whale set the record for the longest dive by a marine mammal when it logged a three hour and 42 minutes plunge, according to a paper published in September. The previous record, held by a Cuvier’s beaked whale in 2014 and heralded as an amazing accomplishment, was two hours and 18 minutes. The recent Cuvier’s beaked whale’s dip was seven times the expected duration for the mammal’s size and metabolism; scientists calculate that species should max out at 33 minutes. The impressive dive is likely at the limit of the animal’s physiological capabilities, as many other individuals tagged in the study dove for an hour or so. To achieve such feats, scientists think Cuvier’s beaked whales likely decrease their heart rates to lower their metabolism and shuttle blood away from certain organs and toward the brain and muscles.

The largest and most famous coral reef in the world, the Great Barrier Reef, can still amaze even the most traveled ocean explorers. During an expedition off the coast of Australia, researchers aboard the Falkor, a vessel run by the Schmidt Ocean Institute, discovered a massive coral reef pinnacle that reached a height taller than the Empire State Building. Offshore and separate from the rest of the reef system, this tower of limestone emerges from the deep seabed and acts as a substrate for coral and sea life to grow and flourish. Nearly a third of a mile tall, the structure rises to within 130 feet of the ocean’s surface. The pinnacle is the first new large element of the Great Barrier Reef to be identified in more than a century.

Scientists can coax sturgeon eggs to spontaneously grow without the aid of insemination by mixing the eggs with another species’ sperm. To spur sturgeon growth, researchers in Hungary used paddlefish sperm because they thought it would be unable to fuse with the sturgeon eggs. While both fish live their adult lives in coastal waters, paddlefish breed in fresh water in North America and sturgeon breed in fresh water in Russia. The species’ closest common relative existed 184 million years ago. The scientists were wrong. Hundreds of hybrids were born and at least 100 survived for several months. The nicknamed “sturddlefish” has physical characteristics of both the sturgeon and the paddlefish. They are likely sterile and the researchers don’t plan to breed any more, leaving these captive fish as truly one of a kind.

Even planet Earth has a few marvels that rival imaginary visions of alien life. The giant sea whorl of 2020 is one of them. This large siphonophore, a gelatinous creature similar to a jellyfish, wowed ocean scientists exploring the deep sea off the coast of Western Australia. A team of researchers from institutes including the Western Australia Museum, the Schmidt Ocean Institute and the Scripps Institution of Oceanography discovered the Apolemia siphonophore while operating a remotely operated vehicle, named SuBastian. From afar, the creature looked like silly string strung in a massive spiraled pattern. Though it was difficult to determine the exact length of the siphonophore, scientists estimated its outer ring was about 154 feet long. According to the researchers who discovered it, it is likely the longest animal ever recorded.

COVID-19 seems to affect all facets of life, including the study of ocean life. Pandemic related restrictions have significantly decreased ship traffic, one of the major contributors of underwater noise pollution. Now, several, research groups are taking advantage of the quieter than normal seas to study the reactions of whales. Noise pollution is known to drown out whale vocalizations related to mating and hunting. Loud noises from sonar use and sea mining can also harm whale internal ear structures, and may cause the marine mammals to engage in deadly avoidance behavior like deep dives and strandings. Scientists are now collecting hormone and genetic data from biopsy samples during the relative underwater quiet resulting from the pandemic to detect whale health norms. They will then compare what they find to data from samples gathered after noise ramps back up again to further understand how marine commotion may stress the animals.

A Lot of Plastic Sinks

Every year, ocean plastic makes headlines and this year is no different. A new study determined that roughly 15 million tons of microplastics have sunk to the deep sea, which is double the estimated amount of plastic floating at the ocean’s surface. The estimate was based upon a seafloor sampling project off the coast of Australia that recovered sediment. The researchers measured the amount of microplastics in the samples and then used that data to calculate microplastic abundance worldwide. Sadly, the scientists acknowledge that their estimate was conservative, meaning that likely even more plastic sits at the bottom of the ocean.

Taking a dive aboard a submersible to the deepest part of the ocean is a remarkable accomplishment only a few can claim. In 2012, filmmaker James Cameron descended more than 35,000 feet to Challenger Deep in the first solo dive completed. Since then, American explorer Victor Vescovo has visited the Challenger Deep eight times. His submersible, Limiting Factor, has also shuttled other explorers to the location—including Kathryn Sullivan, a geologist and former NASA astronaut. On July 7, 2020, Sullivan became both the first woman to descend to Challenger Deep and the first person to visit it and space.

Danielle Hall is a digital producer at Smithsonian’s Ocean Portal. She has a Master’s in Science Journalism and Communication from Stony Brook University and is an ocean lover and travel enthusiast.