In 1904, several Pygmies were brought to live in the anthropology exhibit at the St. Louis World's Fair. Two years later, a Congo Pygmy named Ota Benga was housed temporarily at the American Museum of Natural History in New York City—and then exhibited, briefly and controversially, at the Bronx Zoo.

--The Pygmies’ Plight, in the December 2008 issue of Smithsonian magazine

In October, when we were working on “The Pygmies’ Plight”, I found Ota Benga’s sad story and was disappointed we couldn’t fit more of the details into our article, so I thought I would share some of them here. (For those who are interested in reading even more, I recommend Ota: The Pygmy in the Zoo, by Phillips Verner Bradford and Harvey Blume.)

Ota Benga, a pygmy, was born somewhere in a forest in Congo around 1883. He married young and started a family. One day he returned from elephant hunting to find his village slaughtered, and he was captured and sold into slavery. 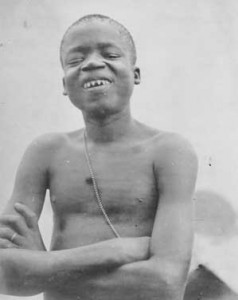 In March 1904, an American, S.P. Verner, found Ota Benga in a slave market. Verner had come to Africa to collect pygmies for the St. Louis World’s Fair. He bought Ota Benga’s freedom and convinced him and, later, eight other pygmies from a tribe called the Batwa to come to St. Louis. The pygmies took up residence in the anthropology exhibit, next to a group of Native Americans that included the legendary Geronimo.

Verner returned the pygmies to Africa in 1905, and Ota Benga tried to adjust to life with the Batwa, even marrying a Batwa woman. Ota Benga also traveled around Africa with Verner, and after Ota Benga's second wife died, he asked to return with Verner to America.

But Verner was having money troubles, and when they arrived in New York City, he arranged for Ota Benga to live at the American Museum of Natural History. People aren’t meant to live in museums, though, perhaps particularly pygmies more used to the forest. At a gathering of wealthy donors, Ota Benga flung a chair at the head of Florence Guggenheim.

The museum then arranged to transfer Ota Benga to an even more outrageous home: the Bronx Zoo.

Ota Benga roamed freely, sometimes helping out the keepers with chores. He spent time with the chimpanzees in the Monkey House. And then, after a few weeks, some zoo officials found a chance to make a splash when they hung up the pygmy’s hammock in an empty cage and handed him a bow and arrow.

The pygmy exhibit was immediately controversial. In addition to what we would call a natural aversion to locking up a person as a zoo exhibit, some Christian ministers objected to the “demonstration of the Darwinian theory of evolution.” (And, yes, I think it’s sad that we’re still arguing about evolution a
century later, even though now at least we know that pygmies aren't a "missing link.")

The zoo discontinued the exhibit in the Monkey House, but now Ota Benga was hounded by visitors as he walked the zoo’s grounds. An incident with zookeepers in which he apparently threatened them with a knife led to his removal, first to a New York orphan asylum and later to a Lynchburg, Virginia seminary.

In Lynchburg, Ota Benga’s pointed teeth (a form of cosmetic dentistry still practiced by some African pygmies today) were capped and his name changed to Otto Bingo. He briefly worked in a tobacco factory before turning to odd jobs in return for room and board. He made friends, although it was hard to convince people that his impossible story was true. And on March 22, 1916, he shot himself in the heart with a stolen revolver.