Flashy feathers and extravagant fur are the Ferraris and Rolex watches of the animal kingdom. Males use these over-the-top features to attract females and send a status message to competitors.

Just as luxury items in the human world oftentimes reflect true underlying wealth, male animals’ ornaments and colors likewise often correlate with their genetic attributes and physical fitness. Females, therefore, can accurately judge which male would make the most advantageous mate, while weaker males can avoid butting heads with rivals that would clearly dominate them.

These sexual and social signals are well studied in animals such as peacocks, deer and lions, but, until now, no one had examined how those rules may or may not bend when it comes to color-changing animals such as chameleons. Their skin can morph into psychedelic rainbows of pink, blue, red, orange, blue, yellow and green, the patterns of which can rival even the most exuberant Jackson Pollock canvas. Surely the animals must be using those seemingly unlimited color combinations to send social cues to one another, figured researchers from Arizona State University.

To find out, they decided to study interactions between male veiled chameleons, a species prone to engaging in heated masculine contests. Though male-on-male aggression in this species oftentimes does escalate to the point of becoming physical, sometimes the fight is settled without the lizards laying so much as a zygodactylous toe on one another. Instead, the antagonists face each other and rapidly shift their color patterns while throwing a hissy fit. Something about how the males change color during the standoff, the researchers figured, must be driving the fight-or-flight response. 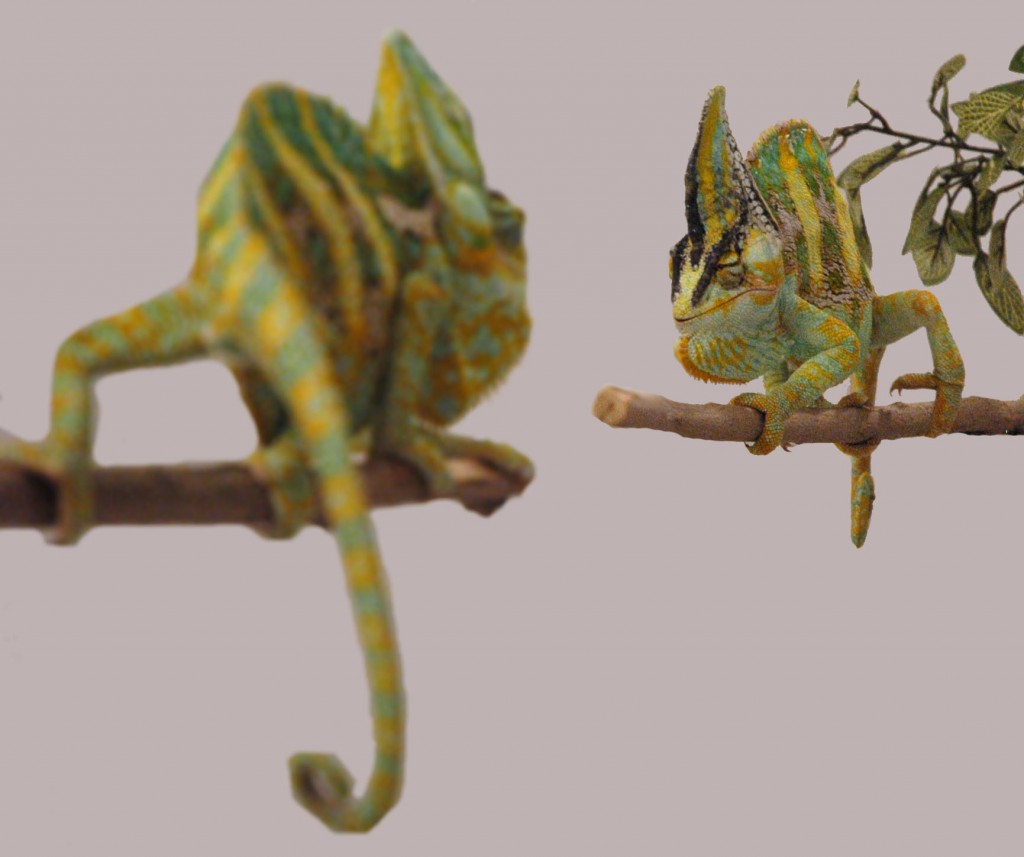 Two male chameleons faceoff as the researchers watch their every colorful move. Photo by Megan Best

Following this hunch, the team acquired 10 male chameleons and then pitted them against one another in a sort of animal-scaled tournament. Males fought one-on-one, and each male fought every other male, regardless of his standings in previous matches.

In 17 of the 45 encounters, both males did indeed display aggression. The researchers recorded those matches with high definition video cameras and noted which lizard first initiated the aggression, as well as which eventually retreated (the loser) and which stood his ground (the winner).

From the high-res video, they homed in on 28 different color patches during these encounters (adjusted slightly on an individual-to-individual basis to account for differences in males’ builds). They used computer models to analyze each patch for the rate and intensity of color change, which was based on preexisting data others had compiled about the maximum brightness of chameleon color change. 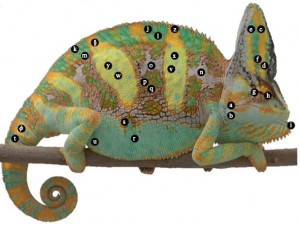 A sampling of the color patch locations the researchers studied to see how male color change varied from lizard to lizard. Photo: Ligon & McGraw, Biology Letters

A male’s tendency to initiate the antagonism by approaching another and his chances of winning that match were highly correlated, the researchers report in the journal Biology Letters. Furthermore, when they analyzed the males’ colors just prior to and during the standoff, an interesting pattern emerged. How bright a male’s stripes were, they found, explained about 70 percent of the likelihood that he would initiate a rainbow visual attack. However, the males with the brightest heads tended to win if things got physical (explaining 83 percent of the variation in fighting ability), and those that flared the most brazen hues fastest were even more likely to be winners.

Chameleons, the authors conclude, do use color change to send signals about different aspects of their fighting behaviors, namely motivation to aggressively engage others and their ability to win such matches. Natural selection likely pursues those two different signals, the team explains, because those varying behaviors affect contest outcomes differently. “For example, regardless of true ability, animals who fight harder to defend mates or territories can often overcome less-motivated competitors,” they explain. In other words, for a male who is strong but can’t be bothered to get into a tiff for whatever reason, he may chose to back down if he sees a flash of stripey color in a competitor.

On the other hand, the researchers continue, chameleons are quite slow, and aggressive interactions take place in a drawn out choreography. Different signals may allow the animals to “sequentially evaluate competitor intent and quality” over the course of a slow-mo skirmish, they write.

As for why the colors accurately represent fighting prowess, that question will require more research, but the authors suspect that bright and quickly changing colors reflect underlying physical processes, including hormonal standing and energy, which may ultimately determine a chameleon's fighting ability and strength.