In 1969, the third man to walk on the moon, astronaut Charles "Pete" Conrad Jr., also became the first lunar archaeologist. As part of the Apollo 12 crew, he examined an earlier robotic lander, Surveyor 3, and retrieved its TV camera, aluminum tubing and other hardware, giving NASA scientists back on Earth the evidence they needed to study how human-made materials fared in the lunar environment.

Like all astronauts who have visited the moon, Conrad also left behind artifacts of his own. Some were symbolic, such as the U.S. flag. Others were prosaic: cameras, dirty laundry and bags of human waste. NASA's list of Apollo-related items left on the surface is 18 single-spaced pages. It ranges from geology hammers to earplug wrappers, seismographs to sleep hammocks. Even golf balls belonging to Alan Shepard, who managed some practice during Apollo 14, remain on the moon, though they appear to have escaped the notice of the list makers. All told, six manned landings, two manned orbital missions, over a dozen robotic landings and more than a dozen more crash sites offer signs of a multinational human presence on and around the moon. Each item left behind may seem like a small scrap for a man, but together they offer a giant look at mankind.

“These sites are time capsules," says Beth O'Leary, an anthropologist at New Mexico State University in Las Cruces. They host valuable artifacts for archaeologists and anthropologists who want to study humanity’s growing space heritage. Failed instruments at lunar landing sites, for example, might reveal the engineering or management missteps behind them, the same way the sinking of a ship on earth could tell us something about its commanders or passengers. Archaeologists might even want to study the DNA of microbes in the astronauts’ waste for clues to the diet and health of these early pioneers. “People's idea is that archaeologists are interested in 1,000 years ago, 100 years ago,” O’Leary says, “but here we're talking about the modern past.” 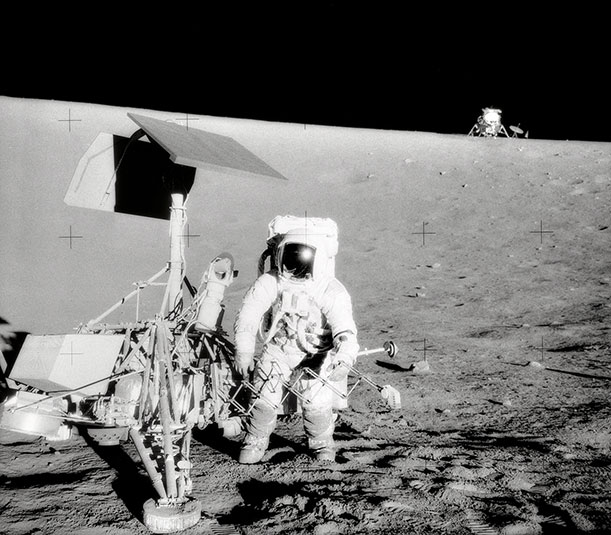 Conrad examines the unmanned Surveyor 3 spacecraft, which landed on the moon on April 19, 1967. He retrieved its TV camera, aluminum tubing and other hardware. Credit: NASA, Johnson Space Center

The effort may not sound urgent. The moon has almost no air, water or geological activity to corrode or otherwise damage artifacts, but a new generation of missions are headed there and they boost the risk that someone or something will interfere with existing sites. This week's planned robotic landing by the Chinese National Space Agency, the first controlled landing since the 1976 Luna 24 mission, signals a renewal of sophisticated lunar exploration. This time around, more countries will be involved, as will commercial entities. Private organizations are in hot pursuit of the Google Lunar X Prize, which offers cash rewards for achieving technical milestones, one of which is landing near the Apollo sites. A recent bill introduced in the House, called the Apollo Lunar Landing Legacy Act, proposes a novel form of protection. Unfortunately, it appears to interfere with existing space law.

O'Leary's interest goes back to 1999, when a graduate student in a seminar she was teaching asked if American preservation laws applied to artifacts left on the moon. O'Leary didn’t know, so she looked into the question, soon discovering that the Outer Space Treaty of 1967 prevents nations from making sovereignty claims in space. It does not address, however, the preservation of property that nations have left behind. O’Leary persuaded NASA to fund her research into the topic, and published what she calls the Lunar Legacy Project. She and colleagues created an inventory of the Apollo 11 landing site and began lobbying for its formal protection. By then, private companies such as Lockheed Martin were already discussing taking samples from other lunar sites for study. The hardware itself still belonged to the governments that put it there (the United States and Russia, the primary heir of the Soviet space program), but that would be little consolation if a modern mission ran over the first human footprints on the moon, for example, or moved an object without documenting its original location.

O'Leary helped lobby California and New Mexico, states with strong ties to the space program, to list the Apollo 11 objects in their state historic registers. The move offered symbolic protection and attracted attention to the problem but didn’t do anything to solve it. There was, and still is, nothing to stop new visitors from interfering with objects already in space.

Vandalism probably isn’t the biggest concern, but even unintentional interference is worrisome. Landing near existing sites could damage the sites, in the case of a crash or from the spray of lunar dust and rocket exhaust. "My concern would be that they miss,” says Roger Launius, senior curator of space history at the Smithsonian National Air and Space Museum. “If they miss by just a little bit, they could end up landing on top of the site." And well-meaning archaeologists, though guided by the cultural legacy laws and professional codes wherever they work, do destroy part of what they study as a matter of routine. 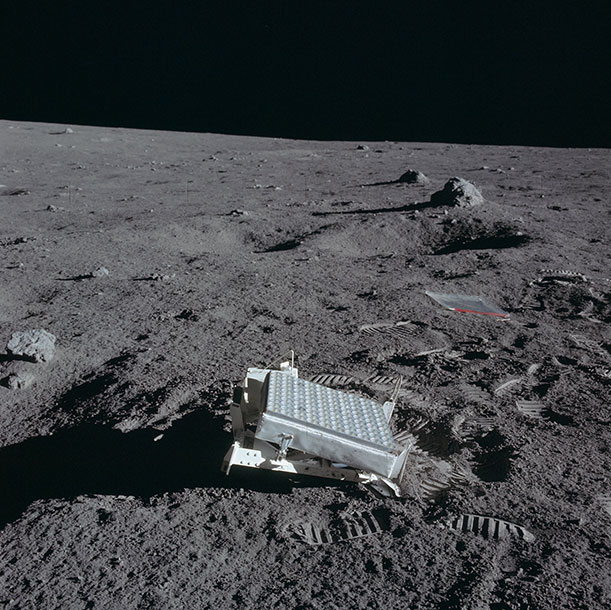 O’Leary would like the moon sites preserved as long as possible so that future archaeologists, perhaps with more sophisticated instruments and less damaging techniques, can examine them for clues about the human story of the landings. Scientists and engineers also have an interest in preserving the sites: They want to study how equipment left on the moon ages, like they did with the samples Conrad took from Surveyor 3. They also want to resolve questions about moon rocks that couldn’t be answered the first time around, including the size of a patch of orange volcanic glass discovered by geologist Harrison Schmitt during the Apollo 17 mission.

By 2011, O’Leary’s effort had become national: NASA researchers, engineers and managers called O'Leary and Launius, who is writing a book on space heritage, to a meeting to discuss guidelines for protecting lunar artifacts and sites. "We should avoid them until there is a collective agreement on how to study them," O’Leary told the meeting attendees. The non-binding guidelines that NASA later released, and which the Google Lunar X Prize organizers agreed to take into account, established "keep-out" zones for fly-overs, rovers or manned visits around Apollo-era sites. Rob Kelso, a former NASA manager, notes that he and the guideline’s other creators still depend on the threat of negative publicity to prevent sloppy visits: "If you damage those sites, you could get a backlash," he says.

Earlier this year, Maryland congresswoman Donna Edwards, who had previously worked on NASA’s Spacelab project, and Texas congresswoman Eddie Bernice Johnson took the protection efforts a step further by introducing a bill that would designate the Apollo landing sites as a unit of the U.S. National Park System and submit the sites for designation as a UNESCO World Heritage Site. But the bill presents a conundrum, as space policy experts Henry R. Hertzfeld and Scott N. Pace wrote last month in Science magazine (subscribers only). It may not comply with the Outer Space Treaty. How can you claim to own the site and its artifacts, to designate them under the control of the Park System, without claiming to own the land they sit on? How can you own a footprint, without owning the soil? 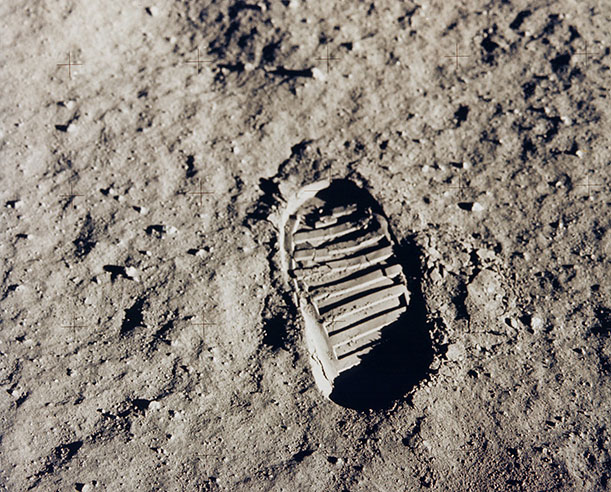 This is an image of Buzz Aldrin's bootprint on the lunar surface. He and Neil Armstrong walked on the moon on July 20, 1969, during the Apollo 11 mission. Credit: NASA

Instead of supporting the bill, Hertzfeld and Pace call on officials from the United States to work with the Russian and Chinese governments to draft a joint protection plan that can then be offered to other spacefaring nations. “The first step is to clearly distinguish between U.S. artifacts left on the Moon, such as flags and scientific equipment, and the territory they occupy. The second is to gain international, not unilateral, recognition for the sites upon which they rest,” Hertzfeld and Pace write.

Space is not the only place with a vacuum of sovereignty: Antarctica is a quilt of unrecognized sovereignty claims, and the open ocean belongs to nobody at all. People have found ad hoc ways to conduct scientific research and to preserve and learn from human historical artifacts there, but the results have not always been ideal. Consider, Launius says, the tourist-ransacked Scott hut in Antarctica. Or, notes Kelso, the way some commercial salvage operators take advantage of the absence of laws to cut corners when recovering valuable sunken material.

Unless countries work together to establish international heritage laws soon, Kelso adds, the landing sites may receive protection only once it’s too late. Preserving the first footprints on the moon, not quite property or territory, requires a new way of cooperating, a giant leap of its own.