If you've felt lethargic and dull while sitting in a packed classroom recently, you may have assumed that it had something to do with the content of your teacher's lecture. But it might actually be something in the air. 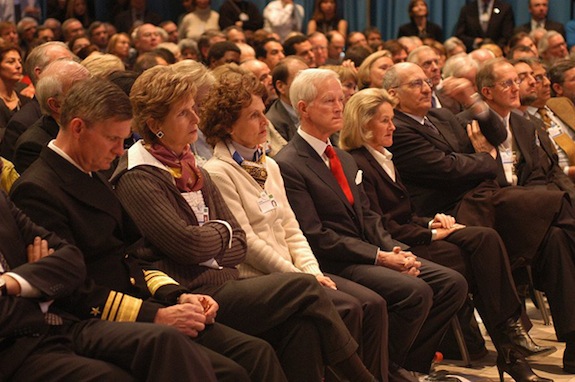 Attendees at the World Economic Forum, above, might think a little more slowly thanks to all the carbon dioxide in the room. Image via Wikimedia Commons/Gardiner Pearson

Although conventional wisdom has held that the concentration of carbon dioxide needed to slow cognition is much higher than the amount we encounter on a regular basis, a study published last month in Environmental Health Perspectives suggests that the collective carbon dioxide exhaled by all the people around you might cause you to think more slowly.

When researchers from SUNY Upstate Medical University and the Lawrence Berkeley National Laboratory put 24 healthy young adults in an enclosed room and tested their decision-making ability at different levels of carbon dioxide concentration routinely experienced in crowded rooms, they found that the participants' performance declined significantly.

"In our field we have always had a dogma that carbon dioxide itself, at the levels we find in buildings, is just not important and doesn't have any direct impacts on people," Berkeley Lab scientist William Fisk, a coauthor of the study, told Phys.org. "So these results, which were quite unambiguous, were surprising."

As part of the study, they put four participants at a time in a small, office-like room for three periods, each 2.5 hours long, with a one hour break in between. For each group, they pumped in enough pure carbon dioxide to achieve three different concentrations in the air: 600, 1,000 and 2,500 parts per million (ppm). For reference, the air outside typically has a carbon dioxide level around 380 ppm, but because we exhale the gas when we breathe, levels indoors are generally much higher—in crowded classrooms or meeting rooms, levels frequently reach 1,000 ppm and sometimes exceed 3,000 ppm.

During the periods the participants were in the enclosed room, they completed decision-making tasks as part of the Strategic Management Simulation, a test developed by SUNY that asks participants to make decisions based on hypothetical scenarios. It then scores test-takers in nine different areas: basic activity, applied activity, focused activity, task orientation, initiative, information orientation, information usage, breadth of approach and strategy.

Although the researchers suspected the participants' abilities might diminish slightly, they were surprised by just how significant the effects of the carbon dioxide were. Decision-making decreased moderately at 1,000 ppm as measured on seven of the nine scales, with decreases ranging from 11 to 23 percent, and significantly on those same scales at 2,500 ppm, with decreases of 44 to 94 percent. The most dramatic effects were found in the participants' ability to engage in strategic thinking and take initiative. "The magnitude of effects measured at 2,500 ppm was astonishing—so astonishing that it was almost hard to believe,” Berkeley Lab scientist Mark Mendell, a coauthor, told Science News. 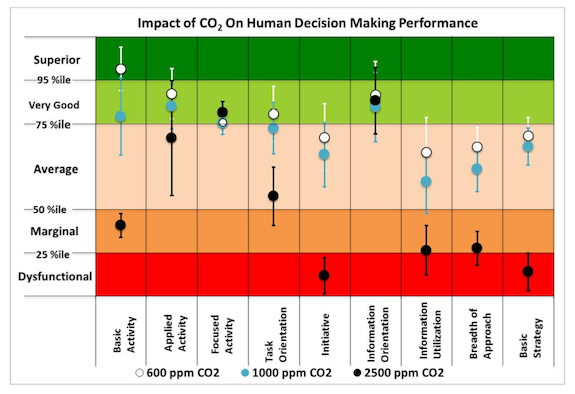 Performance declined in decision-making as measured on seven of nine scales when carbon dioxide concentrations in the room increased. Image via Environmental Health Perspectives

Until now, scientists assumed that carbon dioxide had to be present at much higher concentrations to have a direct effect on human health. "Previous studies have looked at 10,000 ppm, 20,000 ppm; that's the level at which scientists thought effects started," Mendell told Phys.org. "That's why these findings are so startling."

The results are especially concerning because recent efforts to build more energy-efficient buildings have actually cut down on the amount of ventilation in many classrooms. "As there's a drive for increasing energy efficiency, there's a push for making buildings tighter and less expensive to run," Mendell told Phys.org. "There's some risk that, in that process, adverse effects on occupants will be ignored."

EPA guidelines suggest that carbon dioxide concentrations in classrooms be no higher than 700 ppm more than outdoors, which typically ends up being around 1,000 to 1,100 ppm. These standards, though, were originally developed based on the ventilation levels at which body odors become apparent, not any concrete measure of the effects of carbon dioxide on the body.

Because this study was conducted with such a small sample size, the authors caution that the results ought to be tested on much larger scales before any strong conclusions are made. If they're repeated, though, we may want to rethink the way we design our buildings—and what might be making us tired during the middle of a long lecture.