Here's a statistic you may not have run across before checking The Gist today: the number of turtles farmed each year in China. A new survey of China's 1,499 registered turtle farms says that number is at least 300 million and could easily top 600 million. The reported trade is more than 100,000 metric tons per year, worth $750 million. 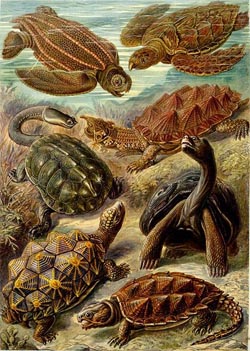 The news strikes me as a wake-up about the collective appetites of humans on our planet. I've been dimly aware that turtles were edible since about 1991, when I happened on an Alabama farmer picking up a freshly killed snapping turtle by the tail from a rural road. I know there are campaigns to save sea turtles from the pot in Baja California, and turtles are often on the menu (and in the pharmacy) in Asia. But 100,000 tons - roughly two Titanics' worth - per year?

The study's authors took a novel approach to compile these numbers: they just asked. They sent questionnaires to the 1,499 farms and got answers from just under half (the authors made follow-up visits to a few farms to gauge the accuracy of responses.) That's why the bottom line is at least 300 million turtles worth $750 million - half the farms didn't respond, and other, unregistered farms almost certainly operate off the books.

The news sends mixed messages: on the one hand, at least those hundreds of millions of turtles aren't being plucked, slow legs waving, from the muddy banks of Chinese wetlands. People have long noted the enormous numbers of turtles in Asian markets, and until now the assumption has been they were mostly coming from the wild.

On the other hand, farming carries its own problems. Among the top 11 species reported from turtle farms, seven are listed endangered or critically endangered on the IUCN Red List. Also in the stock ponds are non-native species from as far away as the U.S. (including the alligator snapping turtle of the deep South, a Thanksgiving-sized turtle if there ever was one). Escapes are inevitable on farms, even for turtles. Escaped, often inbred, native species can harm local gene pools (as with farmed salmon), whereas non-native escapes can become invasive (see Burmese pythons in the Everglades).

Check this New York Times article for more on the plight of Chinese turtles and on conservation in the rapidly developing country in general. Meanwhile, if you've managed to picture this news as a teetering mountain of turtle carcasses, you're ready for the next statistic: The USDA reports that on average, each American eats 51 pounds of pork per year. And that's third behind beef and chicken.