Ten Celestial Events to Look Forward to in 2021 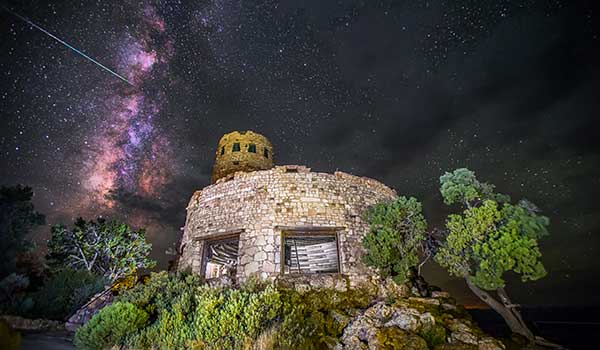 In 2020, astronomers observed Comet Neowise streak through the sparkling night sky, a total solar eclipse and a once-in-a-lifetime conjunction of Jupiter and Saturn. The pandemic meant that the watch parties of the past had to be replaced by solo viewings from sky-watchers’ backyards. This year will offer plenty of other opportunities for amazing views, many of which will also require socially distanced nights. Seek out remote places away from city lights—state and federal parks are usually a good bet—or switch out the white light bulbs in your backyard for red ones, so that your eyes can better adjust to the night sky.

While some events will be best viewed from particular states, there’s plenty of stunning opportunities for outer-space enthusiasts across the map. Whether you’re a longtime astronomy enthusiast or someone embracing a newfound quarantine hobby, here are ten celestial events visible from North America to mark on the calendar.

January 8 to 11: A Planetary Trio Forms

Mercury, Jupiter and Saturn will cluster very close together in the western sky for four nights in early January. Astronomers haven’t seen any three planets arranged so near one another since October 2015, when Venus, Jupiter and Mars formed a similar trio, according to EarthSky.

Stargazers in North America hoping to catch the planetary trio should look low along the western horizon at dusk, about 45 minutes after sundown, where the sun has just set. Jupiter, the brightest of the three planets at this time, will stand out—but you might need to use binoculars to pick out the other two from the afterglow of the setting sun, according to EarthSky. Find a stargazing spot with an unobstructed view of the horizon for the best chance to spot this unusual triple.

Look to the southeast horizon—ideally with the aid of a telescope—about 20 to 30 minutes before sunrise and you’ll hopefully catch a clear view of Jupiter and Venus. If you’re only viewing with the naked eye, the planets will appear as bright dots and be nestled close together. Of course, as Joe Rao reported for Space.com last year, the planets only appear to touch: in reality, Venus is about 73 million miles away from Earth, and the gas giant Jupiter rests nearly 558 million miles away.

Best viewed from the Northern Hemisphere, the Lyrid meteor shower will rain down from April 16 to April 30, according to the American Meteor Society. Viewers will have to contend with a 68 percent-full moon on the peak night of April 21 and 22—which will set around 4 a.m. Eastern time. But if you’re willing to stay up—or wake up early—for those pre-dawn hours after the moon has set, you’ll have a good chance of catching peak meteor traffic, according to the Griffith Observatory in Los Angeles, California.

A dusty trail of debris left behind by Comet C/1861 G1 Thatcher causes this annual shower, which appears to radiate from the constellation Lyra. Viewers should look for the blue-white star Vega, the brightest spot in the constellation, to catch the show. According to NASA, the Lyrids are also the oldest known meteor showers recorded by human observers: Chinese astronomers first reported the light show in 687 B.C.

For the first time since January 2019, the Earth’s shadow will envelop the full moon in a total lunar eclipse. Observers throughout most of the continental United States will be able to glimpse a partial eclipse, where Earth’s shadow slowly darkens the moon’s surface in the early morning hours on May 26. The moon will turn a bright orange-red—a result of light waves from the sun scattering around the Earth’s edges. The colorful effect earned the phenomenon the nickname “blood moon.”

For most viewers across the U.S., the partial eclipse will begin around 4:44 a.m. Eastern time. For those lucky few along the westernmost edge of California who will be able to view the total eclipse, that show will start at 3:11 a.m. Pacific time, according to National Geographic.

Just two weeks after the spectacular “blood moon,” astronomy enthusiasts in Canada, Greenland and Russia will be treated to a spectacular annular solar eclipse. As opposed to a total eclipse when the moon completely obscures the sun’s rays, in an annular eclipse, a circle of the sun’s light—or a “ring of fire”—surrounds the moon’s shadow. The full annular eclipse will start in northern Canada at 9:49 Coordinated Universal Time. On the same morning, just after sunrise from 5 to 6 a.m. Eastern time, viewers in the Eastern and Midwestern United States will be able to view a partial solar eclipse.

Viewers of a partial eclipse should note that the sun will remain dangerously bright for human eyes at all times, according to NASA. Plan to use special-purpose solar filters and avoid looking directly at the event. Even viewing the partial eclipse through sunglasses, unfiltered telescopes or binoculars can cause retinal damage, per the American Optometric Association.

When a planet is at opposition, it forms a straight line with the Earth and the sun, with the Earth at the center of the three. According to Royal Observatory in London, opposition typically presents the best opportunities for viewing far-off planets like Jupiter, Uranus and Neptune because the planets will be brightly illuminated and riding high in the sky.

This will certainly be true for Saturn, which reaches opposition on August 2. As the gas giant makes its closest approach to Earth all year, audiences will have an unprecedented opportunity to search for the planet’s spectacular rings and dozens of moons through a telescope.

Warm summer temperatures and a sliver, waxing moon will hopefully make for excellent stargazing conditions during the famous Perseid shower. The Perseids are long explosions of light and color caused by larger-than-average pieces of cometary material. Each year, the Earth passes through the dusty debris trail that comet 109P/Swift-Tuttle leaves behind as it swings around the sun. As these pieces of debris interact with Earth’s atmosphere, they burn bright and create fiery streaks in the night sky.

Viewers in dark sky areas could see as many as 83 meteors per hour on the peak night of August 11 to the 12th, per the Griffith Observatory. The shower runs annually from July 14 to August 24, so anyone who looks up after midnight in those weeks stands a fighting chance of seeing a meteor streak through the sky. Just find the constellation Perseus: the meteors will appear to emanate from that spot.

An icy giant and the most distant planet that orbits our sun, Neptune is also the only planet not easily identifiable with the naked eye. Seeing the far-away planet without the aid of a powerful telescope is rare, per Sky and Telescope, but in mid-September, viewers with a pair of binoculars and a steady hand can find the blue-hued planet if they look carefully enough. Neptune emerges in our night sky and faces opposite to the sun on the night of September 14, when it will shine at its brightest. To find the elusive planet, look to the constellation of Aquarius, then lower your gaze slightly to the star Phi Aquarii, which appears to sit next to Neptune in the sky. To the untrained eye, the stars can be tricky to pick apart, so viewers can use a sky chart or one of the many reliable stargazing mobile apps to simplify the process.

In the second lunar eclipse event of the year, the Earth’s shadow will cover nearly the entire moon’s surface—leaving just a tiny sliver of moon untouched, per NASA predictions. The moment of greatest eclipse will take place in the early morning hours of the 19th, and be visible to viewers across the United States. Beginning at 2:18 a.m. Eastern time, stargazers can watch the shadow of the Earth cross the moon’s surface, with the greatest extent of the moon covered at 4 a.m. Eastern time.

Typically one of the most brilliant celestial events of the year, the Geminids will be hampered by a bright moon on peak nights in 2021. The moon will be in its “waxing gibbous” phase, about half-full in the sky until it becomes a full moon on December 19. Viewers should aim to observe the sky in the dark hours before dawn after the moon has set on the morning of December 14, when as many as 150 meteors will illuminate the night sky, according to the Griffith Observatory.

This shower of green fireballs is caused by an asteroid, 3200 Phaethon, discovered in 1983. When the Earth passes through this asteroid’s trail of dust each year, materials burn up as they enter our atmosphere, creating a light show for stargazers on Earth. Meteor showers are typically caused by comets, so the Geminids’ parent object remains a mysterious anomaly, according to NASA.