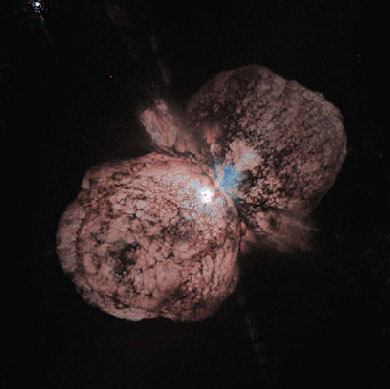 A supernova is essentially the explosion of a large star. Typically, the star collapses and forms a neutron star or black hole, and most of the elements capable of producing a great light show get sucked inside. But 2006 gy was so powerful, said Berkeley astrophysicist Nathan Smith, that it required a new concept; in this case, scientists think that radioactive matter at the core of the dying star powered a fantastic explosion.  The death of stars large enough to produce such supernovae are rare, said Smith—"like people over seven feet tall." But not so rare that they can't happen in our own neighborhood. The Milky Way's Eta Carinae (a Hubble picture, above), a star some 120 times as massive as the Sun, could one day explode with the ferocity of 2006 gy.

Technically, Eta Carinae's extraordinary explosion could take place as early as, oh, say, tomorrow, said astrophysicist Mario Livio. But as unlikely as that is, it's even less likely that Earth would feel any impact from such a blast. "I think we can sleep quietly tonight," Livio said. "However, this particular supernova [2006 gy] will keep us awake for quite a while."

In Livio's case, that might be true. What'll keep me awake is wondering what it takes to get hired as the guy who comes up with better names for the stuff NASA discovers.