It's happened. We're in the early 21st century, and it's now possible for a space suit to look hopelessly outdated. I mean, would you pilot a 1950s vehicle off the planet in something that looks like it recently came off a baked potato? I think Devo once made a music video in more sophisticated space apparel than this. 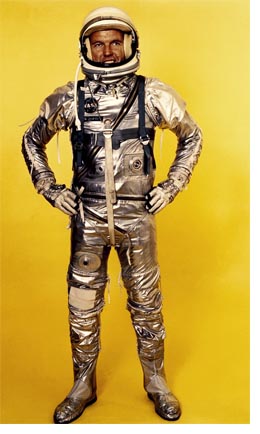 But it's fun looking at the progression of space suit fashion in this NASA slideshow (link is at lower left of page). You even get some glimpses of the future, both conceptual drawings and shots of astronauts testing out the new designs on a dusty Washington lake bed. There's also the famous 1984 shot of the first untethered spacewalk - a prospect that still makes me shiver.

The slideshow doesn't offer any pics of women in space (even though 40 American women have achieved escape velocity). If you hanker for a break from all the manliness, check out NASA's tribute to Sally Ride, who last week celebrated her 25th anniversary as the first American woman in space.

On the fashion side, keep your eyes peeled for the next major development. On July 4, Mattel rolls out "Space Camp Barbie." Who says we're losing our edge in science and technology?