In Sydney, Australian families flock to the beach on Christmas Day. New Orleans celebrates Christmas Eve with bonfires. When people think of Christmas, however, they often envision the snowy scenes of Currier & Ives or the nostalgic hominess of Norman Rockwell. Cold weather and Victoriana aren’t necessary for a happy holiday, of course--even if you ignore the fact that the Southern Hemisphere is in the height of summer and that tropical and subtropical occasions aren't prone to see a white Christmas, holiday traditions have always changed over time and varied from place to place.

But climate change is now jeopardizing many of the features of our modern-day celebrations. Here are six icons of the holidays that are threatened: 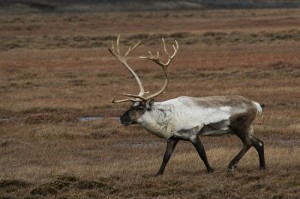 Habitat for caribou--known as reindeer in Eurasia--is shrinking due to climate change. Photo via Tom Olliver/Flickr

Many populations of Rangifer tarandus, known as caribou in North America and reindeer in Eurasia, are declining, as Arctic temperatures increase and the landscape is altered. A genetic study of the animals, published December 15 in Nature Climate Change, found that climate changes over the past 21,000 years affected how the animals spread around the North, isolating some populations and allowing others to interbreed. In the near future, as the Arctic continues to warm, the distribution of the animals will probably become restricted to even higher latitudes than they are today, the researchers predict. Populations in the southern regions of the Arctic may even die out as habitat creeps further north.

“The woodland caribou is already an endangered species in southern Canada and the United States,” study coauthor Marco Musiani of the University of Calgary said in a statement. “The warming of the planet means the disappearance of their critical habitat in these regions. Caribou need undisturbed lichen-rich environments and these types of habitats are disappearing.”

The fir and pine trees that we decorate in December aren’t disappearing, but many tree farms where they’re grown have taken hits in recent years from weather extremes, events that will become more common because of climate change. Farmers in Iowa, Michigan and Wisconsin have had to battle drought. Trees on farms in Vermont and New Hampshire managed to survive four days of extreme heat in March 2012, but many were wiped out by flash floods this past summer. Scientists are also concerned that climate change might spread and worsen root rot caused by the pathogen Phytophthora. “You get used to 20-30 years of how everything works, and now you don't know anymore,” tree farmer Bob White told myChamplainValley.com last month.

The National Oceanic and Atmospheric Administration’s predictions for a snowy Christmas look bleak for much of the United States this year, and such traditional scenes will only become rarer. Between 1966 and 2010, snow cover and sea ice declined in much of the Northern Hemisphere, and snow is expected to continue to decline for the next century, says the National Snow & Ice Data Center.

No snow may affect the aesthetics for our future Christmases, but the problem is much bigger: Snow reflects the Sun’s energy into space, helping to keep the planet cool. Snowpacks provide water for communities far downstream. Ski resorts depend on snow for their business. And animals and other organisms depend on snow for shelter and warmth. All this is lost when precipitation doesn’t come or it falls as rain. 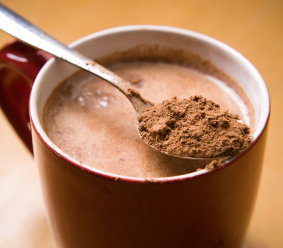 Hot cocoa, and chocolate in general, could become more expensive in the future. Photo via Penn State/Flickr

About half the world’s chocolate supply comes from just two West African nations—Ghana and the Côte d'Ivoire—but the land suitable for growing cacao is shrinking, according to a 2011 report (pdf) from the International Center for Tropical Agriculture (CIAT). “There will be areas that become unsuitable for cocoa … where farmers will need to identify alternative crops,” according to the report. “There will be areas that remain suitable for cocoa, but only when the farmers adapt their agronomic management to the new conditions the area will experience.” Chocolate won’t disappear, but it could become more expensive.

The maple syrup on morning pancakes or maple sugar in Christmas cookies comes from a labor-intensive process in which maple trees are tapped for their sap that is then boiled down. This is possible because of alternating freeze-and-thaw cycles in late winter in maple country, and a snowpack that keeps maple tree roots from freezing. Changes to these conditions, temperature increases or more frequent extreme weather events could all spell havoc for maple tree growth and maple syrup production, according to the U.S. Forest Service. For now, however, maple growers are managing to keep up and even expand production due to the development of hi-tech tactics, such as a machine that uses reverse osmosis to concentrate sap.

If Santa really lived at the North Pole, he would have drowned long ago. But any fantasies we have about him making a home on floating sea ice will surely die within the century. The extent of summer sea ice in the Arctic has been shrinking, and it could be gone entirely within decades. The U.S. Navy predicts an ice-free summer Arctic as early as 2016.

“We really are heading towards an ice-free Arctic in the summer,” Andreas Münchow, an Arctic scientist at the University of Delaware, told the Guardian. “It just takes a freak event eventually, in the next five or 10 or even 20 years…. The long-term trend is that the ice is disappearing in the summer in the Arctic.” The opening up of the Arctic has spurred a race among northern nations to claim those waters and any oil or gas that may lie beneath. And in a move last week, Canada laid claim to the North Pole, which would make Santa a Canuck.