On a ship frozen in the Arctic, scientists have spent all winter to shed light on exactly how the world is changing 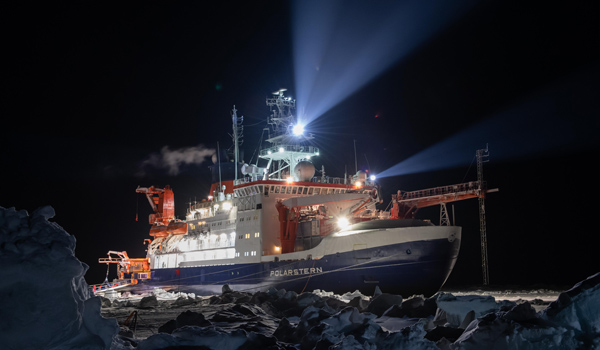 The research vessel in December, two months after mooring to an ice floe nicknamed “the Fortress.” Esther Horvath

Few people would choose to be marooned on a vast expanse of sea ice at the onset of Arctic winter, but this past fall Jessie Creamean was delighted to spend nine weeks aboard a vessel that had been deliberately frozen into an ice cap near the top of the world. On Mondays, she wrapped herself in several layers, including a heavy-duty parka and bulky orange boots with superinsulated soles, and ventured into the polar darkness. Driving snowmobiles loaded with equipment, she and her fellow researchers, on alert for cracks and fissures, caravanned over the jagged surface of the ice.

After setting up a tent as a partial shield against the wind and bitter cold, and wearing red-filtered headlamps to avoid disturbing light-sensitive microbes, the researchers used a battery-powered drill fitted with a spinning circular blade and a three-foot-long barrel to draw about two dozen cores out of the ice. For the next several hours they carefully sliced the cores into sections, calling out precise measurements for Creamean to record. Outside the tent stood a guard armed with a rifle and a flare gun, scanning the horizon for approaching polar bears.

Creamean, an atmospheric scientist at Colorado State University, is one of more than 300 researchers participating in a wildly ambitious, eye-wateringly expensive yearlong expedition called MOSAiC, the Multidisciplinary drifting Observatory for the Study of Arctic Climate. The observatory in question is the expedition’s research vessel, a German icebreaker called the Polarstern, which set sail from Norway last September. When the Polarstern reached Arctic waters, the researchers chose an ice floe that they believed was thick and sturdy enough to last through the summer, then moored the ship to the floe and waited for the ice to freeze around it. The Polarstern and its floe are now indeed drifting across the Arctic Ocean, and if all goes well, they will continue to do so until the expedition ends in September 2020. The researchers hail from more than 70 institutions across 20 countries, and like the polar explorers of old they are driven to understand one of the planet’s grandest, most mysterious and least hospitable regions.

But this is an Arctic their predecessors would barely recognize—and that is precisely the point of the expedition. Over the past three decades, the extent of Arctic sea ice in September, at the end of the summer melt, has declined by 30 percent. Since 2002, the record low for summer ice has been broken four times, and several other recent years have come close to setting new records. Scientists believe this is in part because the dark ocean surface absorbs more heat from the sun than sea ice does, which is contributing to a worrisome feedback loop—warming leads to melting ice, which leads to more warming—promising more and swifter melting in the future.

Because the Arctic plays such an important role in cooling the planet, MOSAiC’s goal is to understand how the ice, atmosphere and ocean are interacting in a warming Arctic, and how those dynamics affect climate around the globe. One group of MOSAiC researchers is studying the currents that move seawater in and out of the Arctic, and how ocean temperatures affect atmospheric conditions as well as the freezing and melting of ice. Some are studying the cracks and gaps that form in the ice as temperatures warm. Others are gauging the levels of greenhouse gases in the ocean and atmosphere. In addition, research aircraft were scheduled to begin flights from Svalbard, Norway, in mid-March to complement atmospheric measurements on the ice, but they were delayed after a German-based team member tested positive for COVID-19. (There is no indication that anybody on the ship was exposed.)

MOSAiC researchers are also studying the tiny organisms that live on the ice and in the surrounding sea, and Creamean is especially interested in these life-forms. During her time on the Polarstern, she studied microbes in Arctic ice and seawater she collected, measuring the minuscule amounts of methane and other gases the microbes digest or produce during their life cycles. She also collected air samples to study how algae, bacteria and other particles blown into the air act as nuclei for ice crystals in the atmosphere, “seeding” the formation of Arctic clouds—clouds that in turn affect the amounts of snow and sunlight that reach the sea ice.

The work poses countless challenges. Fissures can form in the ice and block the way to established research sites, forcing the researches to find alternative routes. The temperatures plummeted to 20 degrees below zero. In mid-November, a violent storm opened up a new crack between the Polarstern and its floe, knocking over a 100-foot meteorological tower and threatening to snap power cables. But spirits remained high, according to Creamean, sustained by the international camaraderie and even the occasional soccer game on the ice.

During long hours in the ice-coring tent, Creamean would occasionally step outside and gaze at the moon or the stars and try to take in the vastness of the Arctic night. “Sometimes the blowing snow would sparkle, and you’d just be struck by the beauty of it all,” she says. “To know that you were one of the very few people who had ever seen that, who had ever stepped foot up there—it was awe-inspiring.”

In early January, Creamean flew home to Colorado hauling an Igloo cooler packed with samples of Arctic seawater, ice and air. Over the coming months, she’ll identify the bacteria, phytoplankton and other microorganisms in her samples from their DNA. Then, she’ll mimic the process of cloud formation in her lab, watching to see which kinds of microbes most readily seed clouds at subzero temperatures. Later, she’ll repeat the process with samples brought back from the Polarstern during spring, summer and fall to observe how the makeup of the atmosphere changes as temperatures warm, the ice melts, and microbes in the surface water are blown into the air. Eventually, she hopes to pin down the precise role microbes in the melting ice play in the formation of the clouds. “It’s a small piece of the puzzle, but it’s a crucial one,” she says. “If we can better understand how clouds form, we can better understand how Arctic weather and climate is affected by different processes—and how those changes will affect all of us.”

Michelle Nijhuis is an award-winning science journalist and regular contributor to Smithsonian Magazine. She has also written for National Geographic, The Atlantic, the New York Times and Nature.

Esther Horvath is a documentary photographer and a fellow at International League of Conservation Photographers. Her work has appeared in National Geographic, The New York Times and Audubon Magazine.