For as long as humans have claimed ownership to things around us—our crops, homes and environments—we’ve been annoyed by other animals. They munch on our plants, creep into our houses and eat creatures that add to an environment’s native biodiversity. The animals we call pests can make the difference between a successful crop and a failure that leads to a hungry winter. They can spread disease, hunt our livestock or simply poop on our statuary. No matter what, we want them gone. As I found during my research for my book, Pests: How Humans Create Animal Villains, people have tried many wacky ways to get rid of the animals that bother us. From elephant repellant to poisoned toad butts, here’s a list of some amusing methods humans have employed to control pests.

An inventor created a mousetrap to blow them away

Humans have had mice since we’ve had houses. The first evidence of the house mouse (Mus musculus) invading our homes came from teeth recovered from an archaeological site of semi-permanent human structures in the Levant—which were occupied 15,000 years ago. The first documented mousetraps were found in the ancient cities of Mundigak, Mohenjo-Daro and Bampur from the Indus Valley civilization, which flourished in what is now Afghanistan, Pakistan and Iran 4,500 years ago. The small pottery boxes had a sliding door that released to trap a mouse inside. Over time, humans have continued to make mousetraps out of buckets, boxes, pottery, rocks, jars and pretty much everything else.

J.A. Williams went one step further than other inventors. His spring-loaded trap included a cocked pistol on a wooden platform. A mouse approaching the bait on the trap would end up in front of the muzzle, and the gun would fire when the critter took the bait. Certainly the contraption fired a potent message, but it was largely ignored when the snap trap was patented in 1894. The snap trap, after all, was less messy—and less of a sacrifice than dedicating a valuable pistol to the cause.

Capturing invasive Burmese pythons (Python bivittatus) in the Everglades is a tall order. They’re cryptic, can slither quickly away and are well suited to the vast wetland. Current efforts to curb their numbers include a yearly python challenge, where hundreds of hunters take to the levies, trying to spot and catch snakes at night.

While some hunters rack up impressive catches, tens of thousands of pythons remain. So some scientists are trying to catch snakes where they are weakest. They go for their, er, hearts. In an adaptation of a method called the “Judas technique, ” which uses a tagged social animal like a sheep, goat or pig to locate other members of the species, scientists release pythons equipped with tracking devices into the wetlands at the beginning of the mating season. When the horny snake stops moving—a possible sign it has found a lover—scientists take off in pursuit. Pythons often mate in groups, with several males forming mating balls around one female. So one enamored snake attracted to a female can betray several more. Thus far, the effort hasn’t made a dent in the number of pythons in the Everglades—but the method is slightly more effective than trying to hunt them down one by one in the dark.

In places like East Africa, African bush elephants (Loxodonta africana) frequently try to snack on corn or sugar cane in farmer’s fields. In Africa, hundreds of people die each year defending their homes from elephants. Elephants die, too; some are shot as “problem” animals, while others are poached. But the elephants are also endangered, so farmers try hard to protect their crops while leaving the pachyderms unharmed. Electric fences can work but are expensive to maintain. Driving the animals off with torches and drums can get people injured and killed. Some farmers keep bees near the crops, which scare away elephants with their threatening buzz and painful sting, but the bees are expensive and require careful handling, especially if a farmer has children.

So some farmers and conservationists have created a cheaper option—elephant repellant. Save the Elephants is experimenting with a recipe in which garlic, chili, ginger and neem oil are boiled in water. Cooks then steep and add elephant and cow dung, rotten eggs and cooking oil, before leaving the concoction to ferment. (Some other local farmers just combine engine oil and chilis.) Pierced plastic bottles filled with the gag-inducing brew are hung on wires around a farmer’s fields right before harvest. As elephants approach the crops, they wiggle the wire, and the repellant sloshes around, spreading the scent. Preliminary studies show that when elephants encounter the stink, they decide that nothing that smells that awful can possibly be worth eating, and they leave. But once they get used to the smell, it might not be much of a deterrent. 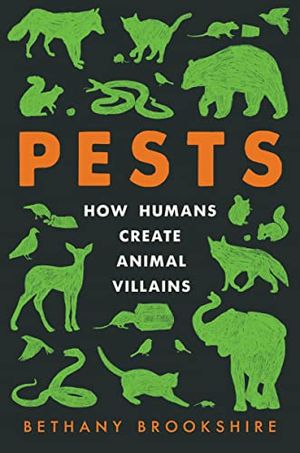 An engrossing and revealing study of why people deem certain animals vermin, and what that reveals about humanity.

Brown tree snakes (Boiga irregularis) invaded the island of Guam after World War II, courtesy of accidental transport by the United States military. The slender, tree-dwelling snakes swiftly multiplied and caused crashes in native bird populations—and sometimes also crashes in the local electric grid when they hung out on wires.

After a wide-ranging hunt to find what might kill the snakes, scientists discovered that 80 milligrams of acetaminophen, about half the amount in a pill of children’s Tylenol, did the trick.

But scientists had to figure out a way to get the snakes to snack on the poison. They came up with an ingenious plan. They stuff the painkillers into dead baby mice, put the mice into cardboard tubes, attach the tubes to streamers that will get tangled in tree branches, and shoot them out of a custom-built gun while flying in a helicopter over the forest. With any luck, the bait will land in front of a starving snake. Some sampling studies suggest the reptile snacks reduce local snake populations by about 40 percent. Scientists are also trying to come up with another meaty option to make the snakes take their medicine—one that doesn’t involve dead baby mice. They’ve created a substitute that looks like off-label Spam, but they need more research to test whether snakes will take the bait.

When Thomas Austin brought the first European rabbits (Oryctolagus cuniculus) to Australia in 1859, he mostly intended them for gentlemanly target practice. Unfortunately, the bunnies escaped, bred and swept across Australia. Their numbers rose so much during the Great Depression that their voracious appetites helped drive farmers from their land. Eating them and turning them into hats did little to dent the numbers.

In 1950, scientists deployed a virus called Myxoma to destroy the rascally rabbits. Carried by mosquitoes, the virus caused huge swellings on bunny faces and ears before leading to death. Over time, the rabbits began to develop resistance, and Myxoma itself became less virulent. So scientists moved to a deadlier disease in 1996. This virus, called calicivirus, was a hemorrhagic fever. It killed much faster and more effectively than Myxoma, but rabbits eventually began to adapt to this disease, too. So scientists developed a newer calicivirus strain in 2015 and knocked populations down again. But the bunnies keep bouncing back. From a height of 600 million rabbits, an estimated 300 million are still hippity-hopping across Australia.

Pigeons (Columba livia) love to perch on decorated buildings, which are an architectural substitute for the cliffs they roost on in the wild. Unfortunately, where pigeons perch, pigeons poop. So humans are constantly looking for ways to stop them from loafing on our limestone. Most methods are pretty prosaic: slides that make ledges too angled for perching, spikes to stop nesting. But pigeons have ways to deal with these defenses. For example, the birds will sometimes pile up trash on the spikes to nest anyway. Some pest managers deploy ultrasonic speakers that play bird distress calls. Unfortunately for them, pigeons do not have distress calls, and they can’t hear ultrasonic frequencies, either.

So pest control operators have turned to something called “Bird Fire.” These small plastic dishes full of gel are stuck on stone surfaces. The gel doesn’t look like much of anything to the human eye. But while pigeons do not hear ultrasonically, they do see into the ultraviolet spectrum, and to them, the gel glows, making it look like the statue or stone face is on fire. Initially, the birds may flee, but unfortunately they will probably be back once they realize the fire packs no heat. And at least one study suggested the gels may also cause problems for other birds.

Scientists introduced cane toads (Rhinella marina) to Australia in the 1930s. The amphibians were supposed to combat the cane grubs threatening the sugar cane crop. Unfortunately, the toads bred to massive numbers and commenced hopping south and west. Native predators saw a new, tasty meal. But the toads hide a nasty surprise—poison packed into pads on their shoulders. The toxic toads left the bodies of predators in their wake—up to 90 percent of predators exposed to the toads died. The Australian public has gone on toad hunts and tried trapping tadpoles in a box filled with their own toxins as a lure. Nothing has worked

Now, as the toad continues its travel, scientists are trying to prepare naive predators for their coming—for example, by flinging poisoned toad butts at native freshwater crocodiles. The rears of the toads are not poisonous themselves. Instead, scientists lace them with lithium chloride, a harmless chemical that produces extreme nausea. The crocodiles eat the poisoned meat, get sick, and hopefully learn to never touch a toad again. Currently, studies have shown crocodiles and other predators exposed to cane toad meat only fall for the poisoned animals half of the time. The efforts will help native animals adapt to their new toad neighbors, but it looks like Australia is still stuck with the amphibians for the time being.

This list was created based on material taken from Pests: How Humans Create Animal Villains, Ecco, Copyright 2022 by Bethany Brookshire.

Bethany Brookshire is a freelance science journalist whose work has appeared in Science News, the New York Times, the Atlantic, the Washington Post and other outlets. She is the author of Pests: How Humans Create Animal Villains.