Barring an observation or two about how science is or isn't cropping up in this campaign, the Gist is not a political blog. But as someone who still remembers sixth-grade planetarium visits where I craned my neck against the theater seats to watch the stars wheel by, I do feel a responsibility to speak up about a recent instance of planetarium-bashing. I'm not talking about John McCain's portrayal in the second debate of a state-of-the-art sky projector as a foolishly overpriced $3 million overhead projector. That mischaracterization was pointed out nearly instantaneously by the Chicago Tribune, Washington Post, Sky and Telescope, Wired Science, Bad Astronomy, Cosmic Variance, Boing Boing, and Gizmodo, among others. What prompts me to post about it now is McCain's decision to repeat the mischaracterization in the third presidential debate, last night. McCain's aversion to pork barrels and earmarks is laudable, and with so many of them floating around in the federal budget, I just don't understand his determination to dump on the defenseless and lovable planetariums of the world. As a visit to your local planetarium will affirm (try the Smithsonian's Einstein Planetarium if you're in D.C.), that lens-studded spherical contraption that faithfully projects the night sky onto the ceiling is a far cry from the overhead projector your 11th-grade history teacher chronicled the Reconstruction on with smelly blue markers. Granted, for $28 you can order a home planetarium complete with nine revolving planets that runs on AA batteries - but something tells me the light bulb on it is not quite up to snuff. A few thousand more can get you an ingenious inflatable planetarium, but it maxes out with considerably less than a school-bus-full of kids. To run a world-class planetarium that brings the mysteries of space to millions of visitors, day in and decade out - as at Chicago's 78-year-old Adler Planetarium, I think that going with a name brand qualifies as money well spent. Now, if we can just leave the science educators out of the earmark wars, perhaps we can concentrate on what the candidates say about the other $699,997,000,000 that has the country so worried? (Image: Google Earth/NASA; it's a patch of sky directly above the Gist and dead in the center of the constellation Leo. It is mesmerizing to zoom deeper and deeper into space in this program - the stars just keep on coming. You should try it in a planetarium.) 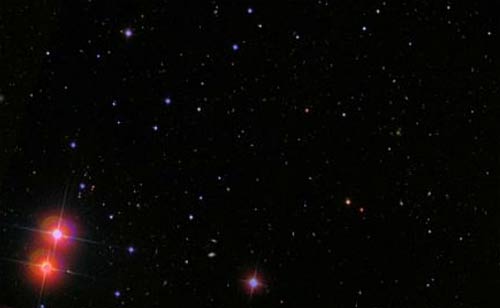