We've now been at McMurdo Station for a mad five days, getting everything organized for a 5-day camping trip at a penguin colony on Cape Royds, 20 miles to the north of us on Ross Island (maps here). We've also attended safety and procedural briefings on everything from snowmobile repair to toilet regulations, plus we've spent two days camping in the snow and another day learning about safety on floating sea ice. Now we're ready to fly.

This picture is Scott's cross, erected in 1913 by the men of Capt. Robert Falcon Scott's last expedition. In March 1912, Capt. Scott and four others, including the pioneering Antarctic biologist Edward Wilson, died in the cold on their way back from the South Pole. Their men found them the next summer and carved this cross in their memory. McMurdo Station is visible low in the background. In a cross-cultural addition to the memorial, modern visitors to the cross have tied prayer flags nearby.

So far, I've seen very few living things except other people. On a trip to the sea ice yesterday I saw four napping Weddell seals and a South Polar skua—a very large, brown, seagull-like bird that's notorious for stealing food of all kinds, from penguin eggs to unguarded sandwiches. But that should change today, as we get the chance to walk into the middle of 4,000 penguin nests. We may be just in time for hatching to begin. See you in five days! 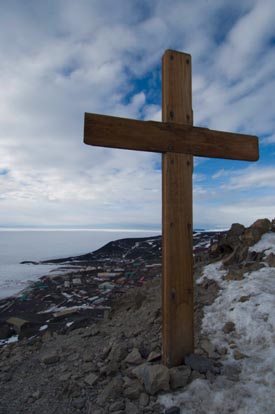 Hugh will be posting from Antarctica through late December. Follow his adventures at Polar Discovery.