On September 5, 2012, a magnitude 7.6 earthquake struck the Nicoya Peninsula on the northwest coast of Costa Rica. “It started out pretty mild, but then it really got going,” Bill Root, owner of a hotel in Samara, near the epicenter, told CNN. “It was a very strong earthquake. Everything was falling off the shelves and the ground was rolling.”

Despite the quake’s size, damage wasn’t too bad. Some homes and schools were destroyed, but no one died. The destruction was limited, in part, because the earthquake had been anticipated, which allowed for efforts to increase quake awareness on the peninsula and to develop and enforce building codes. Well before the earth started shaking, geoscientists had forcasted that a magnitude 7.7 to 7.8 quake should occur around the year 2000, plus or minus 20 years.

“This is the first place where we've been able to map out the likely extent of an earthquake rupture along the subduction megathrust beforehand,” Andrew Newman, a geophysicist at the Georgia Institute of Technology, said in a statement. Newman and his team report their findings December 22 in Nature Geoscience.

The Nicoya Peninsula is prone to earthquakes because it’s an area of subduction, where the Cocos Plate is pushing underneath the Caribbean Plate, moving at a rate of about 8.5 centimeters per year. When regions such as this suddenly slip, they produce a megathrust earthquake. Most of the world’s largest earthquakes—including the magnitude 9.0 Tohoku-Oki quake in Japan in 2011 and the magnitude 9.15 Sumatra-Andaman earthquake in 2004, both of which produced devastating tsunamis—fall into this category. 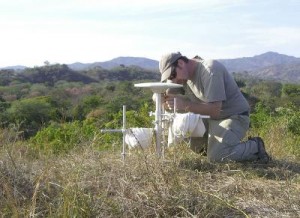 Prior to the 2012 earthquake, geoscientists set up many GPS units across the Nicoya Peninsula. Photo by Lujia Feng

On the Nicoya Peninsula, large earthquakes--greater than magnitude 7--hit every 50 years or so. Such quakes struck in 1853, 1900, 1950 and, most recently, 2012. In addition to that fairly regular pattern of large quakes, the region is special because it’s a subduction zone that sits on land; most others occur beneath the ocean, making them difficult to study. So in the late 1990s, scientists began to study the region heavily, setting up a dense network of GPS stations that let them monitor the earth’s movements.

The close study of this region allowed scientists to calculate how much strain was building in the fault and in May 2012 they published a study in which they identified two locked spots capable of producing an earthquake similar to the one in 1950. In September of that year, the landward patch ruptured and produced the earthquake. The offshore one is still locked and capable of producing a substantial but smaller earthquake, an aftershock with a magnitude as high as 6.9, the researchers say.

Forecasts for similar subduction environments are possible, but they would require substantial measurements made on the seafloor. “Nicoya is the only place on Earth where we've actually been able to get a very accurate image of the locked patch because it occurs directly under land,” Newman said. “If we want to understand the potential for large earthquakes, then we really need to start doing more seafloor observations.”

But better forecasts don’t equal earthquake predictions. Forecasts let regions prepare for the inevitable. Cities and towns can change their codes and build earthquake-resistant structures. They can educate their people for what to do when the quake finally strikes. When the quake happens, some destruction may occur, but it hopefully will be limited, as happened in Costa Rica.

Prediction, on the other hand, is a tricky business--pinpointing the exact day shaking will occur is impossible. Even if it could be done, all it takes is one bad prediction the whole system to go haywire. Imagine an entire city evacuated and then the promised quake didn’t come. A lot of money would be lost. Citizens would lose confidence in scientists. And they’d get angry if a quake happened that wasn’t predicted. They might not take action the next time an earthquake was predicted, and that could lead to many deaths. And because earthquakes are such complicated events, even if a magnitude and location and date were correct, the effects on the surface wouldn’t be clear.

More useful, at least for now, are earthquake early warning systems, such as the one in Japan. The Japanese system detects a quake just as it begins to shake and sends alerts to cellphones, televisions, schools, buildings and mass transit systems before destructive waves reach a population center. If the effectiveness of such a system is maximized, it would allow trains to stop, elevators to come to a halt and people to get to safety before the worst of the shaking.