Since its discovery in 1990, La Sima de los Huesos, an underground cave in Northern Spain's Atapuerca Mountains, has yielded more than 6,000 fossils from 28 individual ancient human ancestors, making it Europe's most significant site for the study of ancient humans. But despite years of analysis, the exact age and even the species to which these individuals belonged has been in doubt.

Now, though, an international group of scientists has extracted and sequenced DNA from the fossilized femur of one of these individuals for the first time. The resulting data—which represent the oldest genetic material ever sequenced from a hominin, or ancient human ancestor—finally give us an idea of the age and lineage of these mysterious individuals, and it's not what many scientists expected.

The fossilized bone tested, a femur, is roughly 400,000 years old. But the big surprise is that, although scientists had previously believed the fossils belonged to Neanderthals because of their anatomical appearance, the DNA analysis actually shows they're more closely related to Denisovans, a recently-discovered third lineage of human ancestors known only from DNA isolated from a few fossils found in Siberia in 2010. The findings, published today in Nature, will force anthropologists to further reconsider how the Denisovans, Neanderthals and the direct ancestors of modern-day humans fit together in a complicated family tree.

The femur from which DNA was extracted for analysis. Photo by Javier Trueba, Madrid Scientific Films

The analysis was enabled by recent advances in methods for recovering ancient DNA fragments developed at the Max Planck Institute for Evolutionary Anthropology in Germany, previously used to analyze the DNA of a cave bear fossil found in the same cave. "This wouldn't have been possible just two years ago," says Juan Luis Arsuaga, a paleontologist at the University of Madrid who led the initial excavations of the cave and collaborated on the new study. "And even given these new methods, we still didn't expect these bones to preserve DNA, because they're so old—ten times older than some of the oldest Neanderthals from whom we've taken DNA."

After extracting a two grams of crushed bone from the femur, a group of scientists led by Matthias Meyer isolated the mitochondrial DNA (mtDNA), a pool of genetic material that's distinct from the DNA in the chromosomes located in our cells' nuclei. Instead, this mtDNA lives in our cells' mitochondria—microscopic organelles responsible for cellular respiration—and is much shorter in length than nuclear DNA.

There's another quirk of mtDNA that makes it especially valuable as a means of studying the evolution of ancient humans: Unlike your nuclear DNA, which is a mix of DNA from both your parents, your mtDNA comes solely from your mother, because most of a sperm's mitochondria are found in its tail, which it sheds after fertilization. As a result, mtDNA is nearly identical from generation to generation, and a limited number of distinct sequences of mtDNA (called haplogroups) have been observed in both modern humans and ancient human ancestors. Unlike anatomical characteristics and nuclear DNA, which can vary within a group and make it difficult to confidently distinguish one from another, mtDNA is generally consistent, making it easier to link a particular specimen with a lineage.

Which is why, when the researchers compared the femur's mtDNA to previously sequenced samples from Neanderthals, from a Denisovan finger bone and tooth found in Siberia and from many different modern humans, they found it so surprising that it more closely resembled the Denisovans. "This was really unexpected," Arsuaga says. "We had to think really hard to come up with a few scenarios that could potentially explain this."

Anthropologists had already known that all three lineages (humans, Neanderthals and Denisovans) shared a common ancestor, but it's far from clear how all three groups fit together, and the picture is further clouded by the fact that interbreeding may have occurred between them after they diverged. Helpfully, comparing the femur's mtDNA to the Neanderthal, Denisovan and modern human samples allowed the researchers to estimate its age—based upon known rates of mtDNA mutation, the previously established ages of the other samples, and the degree of difference between them—leading to the 400,000 year figure.

To explain how a Neanderthal-looking individual could come to have Denisovan mtDNA during this time period, the scientists present several different hypothetical scenarios. It's possible, for instance, that the fossil in question belongs to a lineage that served as ancestors of both Neanderthals and Denisovans, or more likely, one that came after the split between the two groups (estimated to be around 1 million years ago) and was closely related to the latter but not the former. It's also a possibility that the femur belongs to a third, different group, and that its similarities to Denisovan mtDNA are explained by either interbreeding with the Denisovans or the existence of yet another hominin lineage that bred with both Denisovans and the La Sima de los Huesos population and introduced the same mtDNA to both groups.

If this sounds like a complicated family tree to you, you're not alone. This analysis, along with earlier work, adds further mystery to an already puzzling situation. Initial testing on the Denisovan finger bone found in Siberia, for instance, found that it shared mtDNA with modern humans living in New Guinea, but nowhere else. Meanwhile, it was previously thought that Neanderthals had settled in Europe and Denisovans further east, on the other side of the Ural Mountains. The new analysis complicates that idea.

For now, the researchers believe the most plausible scenario (illustrated below) is the femur belongs to a lineage that split off from Denisovans sometime after they diverged from the common ancestor of both Neanderthals and modern humans. But perhaps the most exciting conclusion to come out of this work is that it proves that genetic material can survive for at least 400,000 years, and can be analyzed even after that amount of degradation. Armed with this knowledge and the new techniques, anthropologists can now attempt to genetically survey many other ancient specimens in hopes of better understanding our family tree. 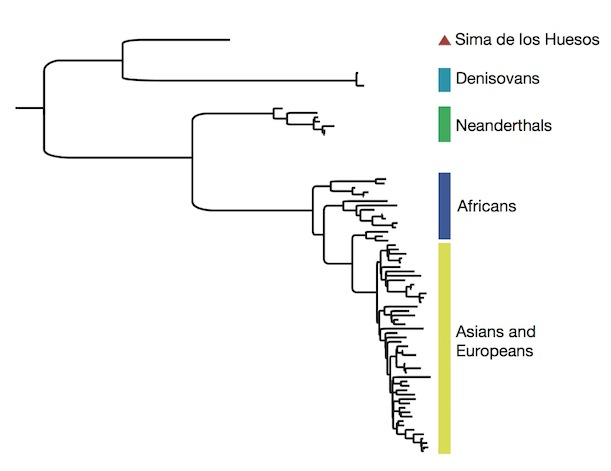