It's not quite astrobiology rap, but a YouTube plea for finding common ground between science and religion is notable for its source, the American Association for the Advancement of Science, the country's leading association of scientists.

The video is a trailer of sorts for a longer film available from AAAS. It features two prominent scientists - Science publisher Alan Leshner and Human Genome Project leader Francis Collins - plus two high school teachers, all describing the equally prominent roles that science and Christianity play in their lives.

Collins says it best: "It would probably be a good thing if scientists like myself who are believers would explain why, from our perspective, we find no difficulty putting these two views together, and also why intelligent design was not the way to do it."

The video is a response to a much-talked-about documentary called Expelled: No Intelligence Allowed, released earlier this year. The movie makes anti-evolution arguments and gets hopping mad about the treatment (or indifference) intelligent design has received from scientists. The scientists themselves - some of whom appear on camera - are hopping mad to find their words have been cherry-picked to fit what they regard as an unflinchingly creationist movie.

With all the inflammatory rhetoric circulating around both sides of the movie - and around much of the intelligent design controversy - it's refreshing to hear Collins's gentle summation:

As the election season heats up and we find ourselves once again being neatly categorized, red-vs-blue fashion, by pundits and headlines, it's worth remembering that it's not even that complicated. Aren't we just one nation, under God (or perhaps the Flying Spaghetti Monster)? Free to believe, to question, to argue, and ultimately to agree to go on living together? 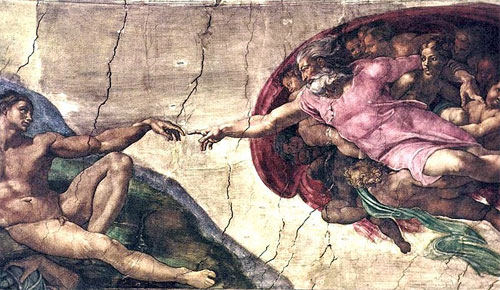