This month we invited former NASA astronaut Tom Jones to be our guest expert. He flew on four space shuttle missions, and on the last one he led three spacewalks to install the U.S. Destiny Laboratory, the centerpiece of the International Space Station’s research and command-and-control capabilities. He is the author of Ask the Astronaut, just published by Smithsonian Books.

Which is more exciting—launch or re-entry?

For me, re-entry was unquestionably more exciting visually. During launch, our flight-deck windows were pointed up at the empty sky. During re-entry, these same windows revealed amazing views of the rapidly approaching Earth and the blanket of hot, glowing plasma that engulfed our ship as it collided with air molecules in the Earth’s atmosphere. The light show lasted more than 20 minutes. And unlike launch, re-entry was completely silent and almost vibration-free, except for the last five minutes of buffeting as we slowed through the sound barrier.

The International Space Station goes around the Earth every 92 minutes or so, meaning astronauts see nearly 16 sunrises and 16 sunsets every 24 hours. Sunrises begin with the appearance of a thin indigo line along Earth’s horizon, changing to a robin’s-egg blue as the ISS heads toward dawn. A rainbow of colors spreads rapidly along the planet’s edge, and then there’s a brilliant burst of white light as the Sun’s disk crests the atmosphere. The subtly glowing horizon explodes into white-hot sunlight in just about 30 seconds. Even digital cameras have trouble capturing the delicate colors and rapidly changing light levels.

How long does it take to recover from an extended trip to the International Space Station?

It takes four to six weeks to regain prelaunch levels of coordination, stamina and strength. At first, your arms and legs feel like lead; it took nearly all my strength to rise from my seat and exit the orbiter hatch with some welcome help from the ground crew. Balance is particularly challenging—it took about three days to recover my equilibrium. Two days after my Columbia landing, I tried to drive to the space center to review our crew’s Earth photography. I made it to the end of my street, three houses down, before I hopped the curb trying to make my first right turn. I parked right there, walked gingerly back to the house, and asked my wife to drive me.

Would you journey to another world in space if you knew you couldn’t come back?

Thank goodness that in the time of Columbus, Ferdinand and Isabella, and Queen Elizabeth I, colonists were willing to leave their familiar lives and search for new opportunities in the New World. If a colony on the Moon or Mars offered better opportunities for my family than here on Earth, I would like to think I’d have the courage to make the leap to a new world. In the long run, some of us will need to move to other worlds and colonize them, to ensure that humanity doesn’t succumb to a terrible virus or comet impact. To survive, we must become a multi-planet species. 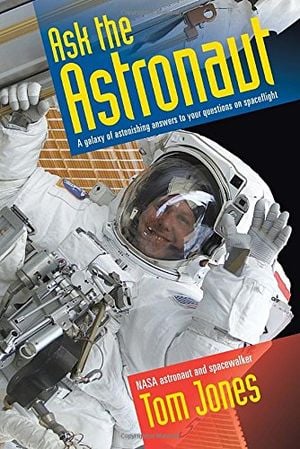 Astronaut and spacewalker Tom Jones answers every question you have ever had about space in "Ask the Astronaut," from the training process for new astronaut candidates, to the challenges of rocketing into orbit, to what it's like to live, work, and walk in space.