In 1917, British artist Norman Wilkinson experienced a eureka moment while serving in the Royal Naval Volunteer Reserve. Throughout the month of April, German U-boats had been mercilessly torpedoing British ships, sending around eight of those vessels per day into the watery abyss. Hiding a ship traveling on the open ocean from plain sight was impossible, Wilkinson knew, but a bit of artistic trickery may be able to muddle the Germans' ability to accurately judge the exact location of that ship, he realized. 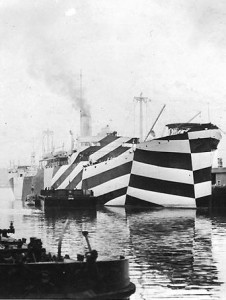 A ship painted with dazzle camouflage in 1918. Photo via Naval History and Heritage Command

From that idea, Wilkinson devised a type of camouflage called "razzle dazzle" (its slightly more serious name is dazzle camouflage). The technique consists of squashing together contrasting geometric patterns, shapes and colors to create a pattern of optics that would confuse enemies by distorting the object's dimensions and boundaries. All in all, more than 2,000 ships received such a makeover, although the scheme's effectiveness seemed to produce mixed results.

By World War II, razzle dazzle had largely fallen out of favor, but as it turns out, this technique lives on in the natural world. High contrast patterns--nature's equivalent to dazzle camouflage--are used by animals ranging from snakes to zebra to fish. Like those hidden World War I ships, many creatures seem to use dazzle patterns to conceal themselves from predators. Until now, however, researchers hadn't considered the flipside of this relationship: could predators use razzle dazzle to sneak up on prey as they mounted an attack?

To investigate this possibility, biologist Roger Santer of Aberystwyth University in the U.K. turned to locusts. These insects are particularly well suited for vision studies due to something called a single lobula giant movement detector neuron, a unique cell that specializes in detecting looming objects (think of a car speeding towards you, or a hand reaching for your face). Researchers think this neuron works by measuring the shape and movement of patterns of light and dark across the eye.  Whatever the mechanism, as looming objects approach a locust, its detector neuron fires away, alerting the insect to imminent potential danger and triggering it to flee. 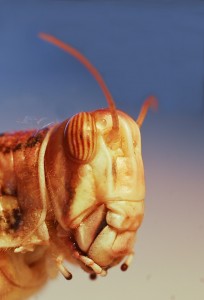 Locusts are a delectable dinner for countless predators. Photo by Lisa Clancy

To see how the locusts responded to dazzle camouflage, Santer created an array of visual patterns using a graphics software. He situated the locusts just in front of the computer monitor, and then projected a simulated approach of those objects from about 10 meters away to about 0.07 meters from the cowering insects. The objects varied in contrast: black, grey or white on a grey background. Around 20 locusts took part in the experiment, and Santer measured their cellular reactions to the various shapes through copper wires inserted into the locusts' neck.

These results are interesting in that they correlate with similar dazzle tests performed on humans, who also had trouble quickly registering dazzle patterns.  However, at this point, whether or not locust predators actually use dazzle to catch their unsuspecting insect prey remains a matter of speculation. Though lab tests confirm this strategy might work, Santer did not investigate whether or not a dazzle dance of death is carried out in the real world.

Hypothetically speaking, dazzle camouflage, Santer concludes, would help a predator but would not be the most effective way of snagging a locust lunch. Instead, classic camouflage--blending in with the background rather than creating an optical illusion--seems to be the most effective means of tricking would-be prey. However, in the case that other selection pressures favor high-contrast patterns (such as if females of a predator species prefer bold stripes in males), Santer thinks that predators could indeed evolve to give 'em the old razzle dazzle.