Polar Bears Live on the Edge of the Climate Change Crisis

On Hudson Bay’s frigid shores, scientists track the animals to better understand how the environment is shaping their chances of survival 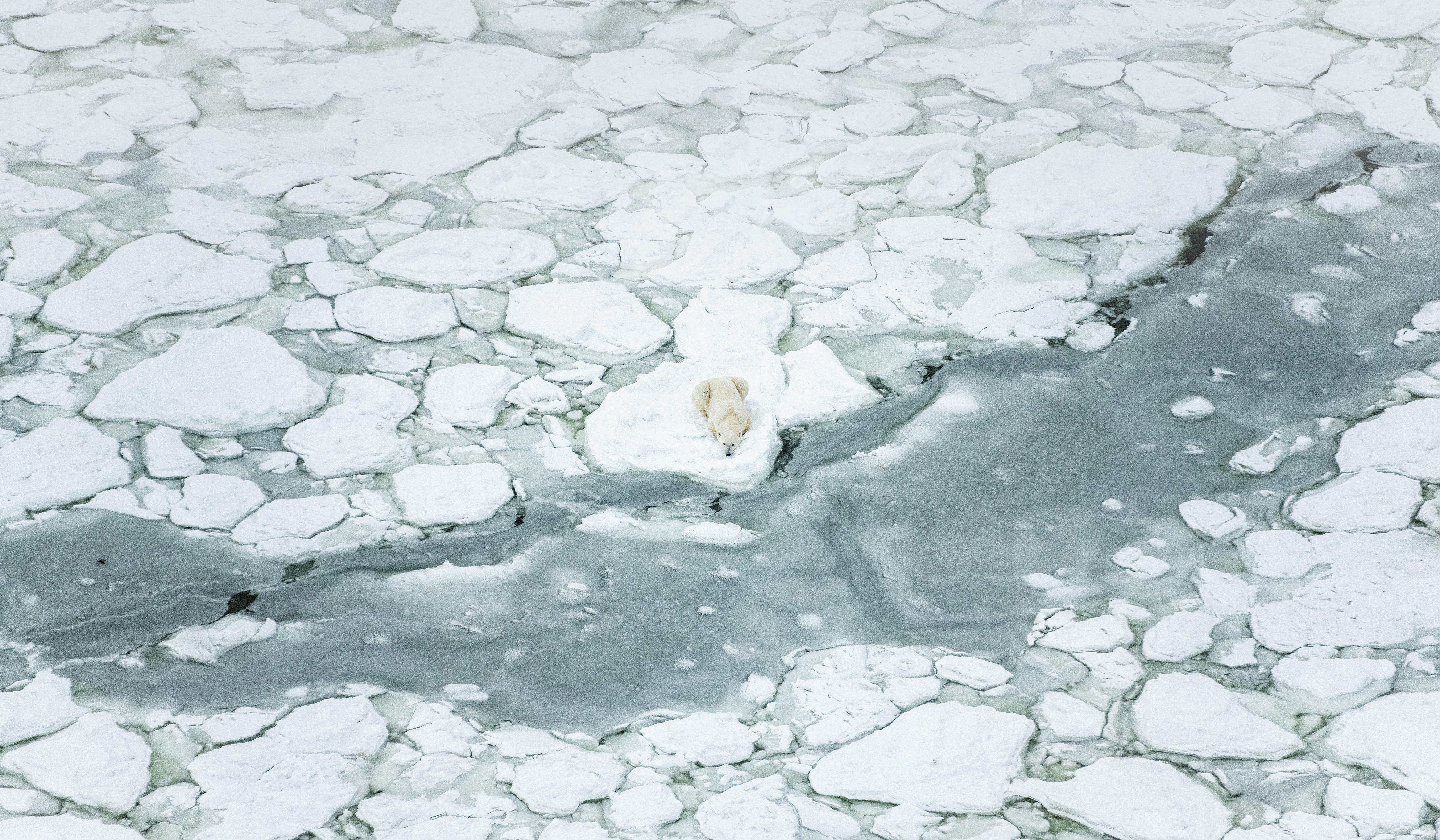 A polar bear, dependent on sea ice for its hunting grounds, pauses near Churchill, Manitoba. Neil Ever Osborne

On the bay this fall morning, there’s a wind-carved rim of ice and a gathering of floes. One male polar bear, bony after a season without seal blubber, struggles along the slushy edge, haunches soaked, nearly slipping into the sea.

We are on Gordon Point, in northern Manitoba, where Hudson Bay widens into its northwest crescent. Polar winds make it colder than at comparable latitudes, and the shallow waters of the bay freeze early. Having passed the summer months in the subarctic wild of Wapusk National Park to the south, polar bears now congregate here, waiting for the ice to come in.

The air is harsh, dry, frigid. We huddle on the deck of Tundra Buggy One, a big-wheeled custom built all terrain vehicle retrofitted for traveling over frozen ground and viewing polar bears. Geoff York, senior director of conservation for Polar Bears International (PBI), uses Buggy One as a roving research station. It’s equipped with GPS, Wi-Fi and polar bear cams that beam live footage to classrooms around the world.

PBI monitors polar bears across the Arctic partly to determine the impacts of climate change on the behavior and physical condition of the animals as well as population trends. One program has tracked polar bears outfitted with GPS ear tags or collars that transmit locations to researchers to gain insight into the animals’ movements. York says, “Our understanding of polar bear biology, ecology and behavior is critical for long-term conservation and can inform on-the-ground efforts like human-bear conflict management.”

From the deck of Buggy One, there are several bears in sight, mostly large males. Invisible in an Arctic blizzard, their double-layer coats, not stark white but golden like sheep’s wool, stand out faintly in the distance on a clear day such as this. They tussle playfully or sleep among the twiggy willow stands on shore. One immense bear sits humanlike on its haunches, blades of grass in its teeth. Others wander the ice rim with a lazy gait that belies their lethal quickness.

York has warned us of the threat the bears pose. “The big bears have likely scared off the family groups,” York says, explaining that at this desperate time of year, when adults are near-starving before the sealing season, males are more likely to cannibalize cubs and attack humans. Despite the dangers, York has focused his 22-year career on stewardship of the polar bear. He and his wife, Rachel, are planning to move from Montana to Manitoba so he can be close to them.

The polar bear has become perhaps the pre-eminent symbol of the consequences of climate change because it needs sea ice to survive. From November, when the ice fastens to shore, to May, when it breaks up, the ice is polar bear territory across the Arctic. The bears sleep on the ice at night, and pregnant females can even hibernate there during the winter. Males and non-pregnant females stay active through the winter days, and the ice is their hunting ground. Laying ambush behind a pressure ridge of ice fragments, the bears stalk seals. “On the ice, they’re slow,” York says of the seals. “The bears are explosive as they run them down.”

There are between 16,000 and 31,000 polar bears in the world today, congregating in 19 populations across the Arctic. In some areas where the bears were heavily impacted by hunting, bans helped their numbers resurge. But the shrinking of their Arctic habitat is making the species more and more fragile worldwide. In Greenland and Norway, the World Wildlife Foundation lists polar bears as vulnerable. In Russia, they’re rare or recovering, depending on the location, and in Alaska (the only place in the United States where they’re found), polar bears are threatened. In Canada, where 60 to 80 percent of polar bears live, they’re a species of special concern, a click of the dial below threatened or endangered.

The population in the Western Hudson is particularly at risk, having fallen from 1,200 polar bears in the 1990s to about 800 today. Climate change has shrunk the expanse of sea ice that once spread from the North Pole to southern Hudson Bay. In 2020, the ice area was the second smallest since measuring began in the 1970s, and it is thinner than ever.

During our visit in early November, the bay’s newly formed ice, having warmed, began to shatter like a teacup. Days later, a south wind pushed it all ashore. “We need north winds bringing cool air and a few days at minus 20 Celsius,” York said, a note of concern in his voice.

Polar bears are hardy creatures—they can fast for upward of 180 days and swim hundreds of miles without a break—but consensus among scientists is the animals won’t be able to find new food sources once they can no longer hunt seals. If a warming climate shrinks sea ice at projected rates, most polar bear populations will be too nutrient-starved to reproduce by the end of the 21st century.

Meanwhile, shrinking sea ice seems to be leading bears to wander into human settlements from Russia to Norway, Greenland to Alaska. Problems ensue. In Alaska, an offshoot of a Russian polar bear patrol program trains communities to use tools like bear spray, flashlights, air horns and rubber bullets to deter bears and protect themselves, while Canada’s Nunavut Territory administers similar efforts through a polar bear conflict manager based in Igloolik. Here in northern Manitoba, a comparable program operates in Churchill, “The Polar Bear Capital of the World.”

Churchill is a town utterly of the north. Its gridded blocks of aluminum-sided houses sit between miles of cratered tundra and the icy mouth of the Churchill River. This cold flank of Hudson Bay was once a meeting place for Inuit hunters and the Cree and Dene First Nations. Today, about three-quarters of Churchill’s almost 900 residents identify as indigenous. The town boasts one of the only movie theaters within a thousand miles, as well as access to Canada’s only deep-water port in the Arctic.

As the climate warms, more bears wander into Churchill to scavenge—or moon around in backyards, or chew the seat off a snowmobile. Mayor Michael Spence, a member of the Cree First Nation, says bear sightings were a novelty when he was a boy in the early 1960s—he remembers playing in a game of road hockey that was interrupted by a mother and two cubs—but today they are more common.

On Halloween 2013, a 30-year-old woman named Erin Greene, who had moved to Churchill from Montreal the previous year, was leaving a party with friends when she looked over her shoulder. “There’s this bear that’s already full-speed running at us,” Greene says. While her friends ran for help, the bear began carrying her off. “I realized that this was a fight I couldn’t win on my own and just accepted that this is the way I was going to die,” she says.

Just in time, a neighbor appeared, striking the bear’s head with a shovel. The bear dropped her and she was airlifted to the hospital to treat her life-threatening injuries. Despite the terrifying ordeal Greene suffered, and the scars and occasional pains she still bears, she returned to Churchill. The reason, she says, is a quality particular to the north. “The cold burns your face, the sky is beautiful, the animals could be around every corner. It’s so real, it’s so raw,” she says. She feels a different connection to polar bears now—“a different understanding.” Her medical bills added up to thousands of dollars, but the local community paid them all.

In the most basic sense, the SpotterRF is a motion detector—much like those used to turn porch lights on. As bears move on the tundra, they trigger the sensors. Their locations pulsate on a digital map, which can be analyzed by York and other scientists. The software performs well at night and in snowstorms, and may one day serve as an early warning system for Churchill.

To keep us safe, Buggy One has backed into a fenced platform at the Tundra Buggy Lodge, like a spaceship docking into port. Inside the Lodge, the SpotterRF radar beeps to signal the approach of a trio of bears. One of them, precocious and curious, toddles near enough that we could poke a finger through the bars and touch its nose. York has told us about “bear jail,” an enclosure that captures bears in town so they can be relocated. But here, he says with an approving smile, “we’re the ones in the cage.”

The next afternoon, back out on the tundra, we watch skinny bears pace the shore. Some hunker down in kelp beds, chewing on the seaweed. A big male stomps the snow with both front paws. Another lies encircled in a snowdrift.

When the tide comes in, sunlight escapes the patchy bank of clouds and brightens the mosaic of ice floes on the bay. From the willows, a mother approaches with a cub, their pace slowing as they take in two large bears skulking where the ice meets the water. The mother looks past them, and from the deck of the vehicle we follow her gaze, out to the bay’s churn. York hopes the ice will be solid soon. “If they go too early, and the ice breaks up, they’d have a long swim back to shore.”

Mark Jacquemain is a writer of fiction for both adults and young readers. His work has been published in numerous magazines and journals in the USA, the UK, and Canada.