The Plight of the Right Whale

With dwindling numbers due to snags in lobster traps and collisions with ships, the right whale is looking for a way to make a comeback 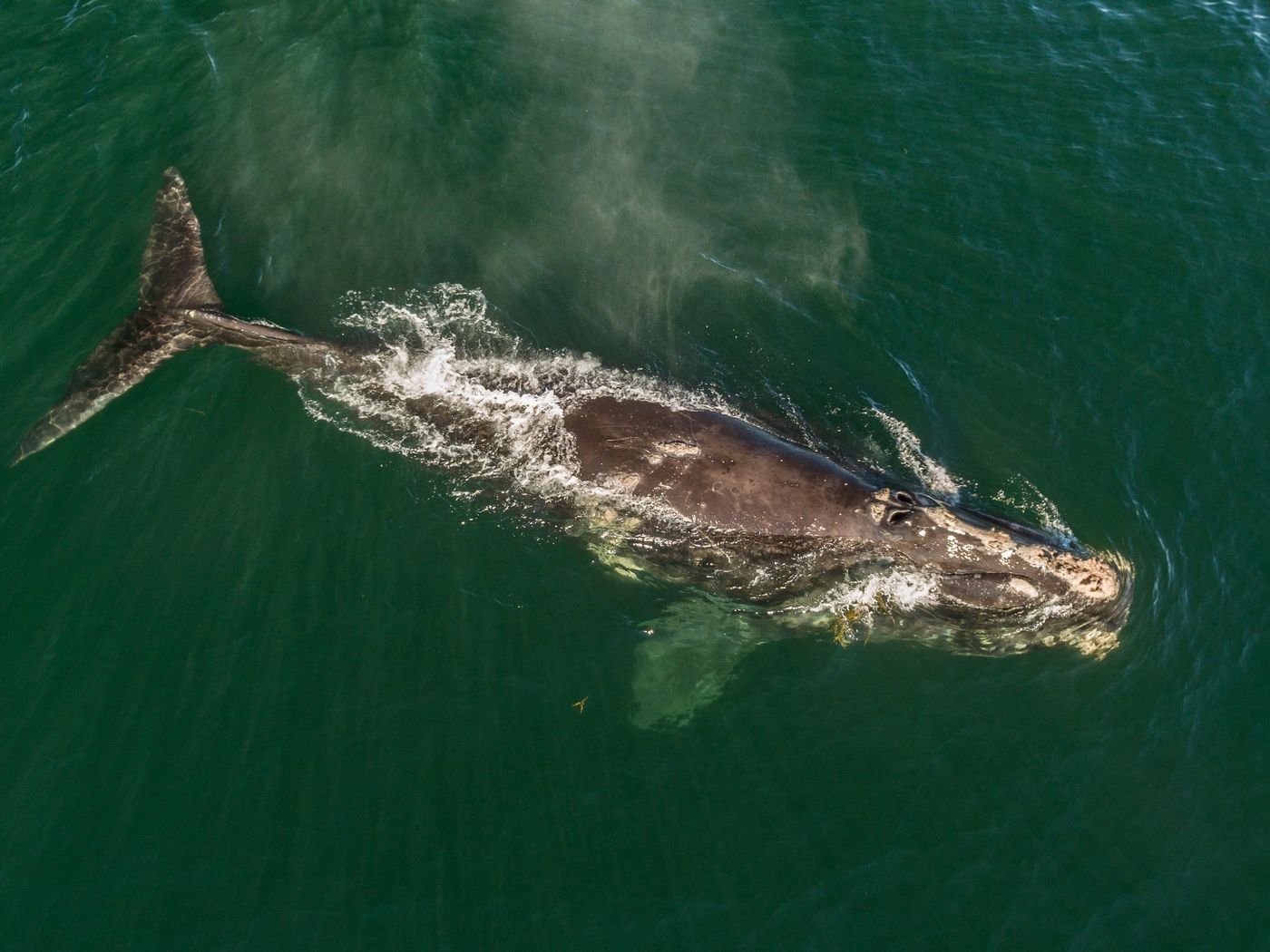 A North Atlantic right whale rests at the ocean’s surface. With an estimated 100 reproductive females remaining, the species could be unable to reproduce naturally in 20 years. Nick Hawkins

From 800 feet above the Gulf of Saint Lawrence off the coast of Quebec’s Gaspé Peninsula, I peer out of the window of a Twin Otter airplane. The sun glares back from the blue expanse below. In the cabin, a Fisheries and Oceans Canada survey team records sightings of seals, porpoises, dolphins and even basking sharks. Soon we see whales—minkes, fins, humpbacks. The crew is nonchalant. But when a pod of North Atlantic right whales comes into view, the buzz of excitement fills the plane.

The pilot banks to circle, and the crew gathers to one side for a better view. The right whales appear prehistoric, with giant heads covered in callosities—patches of roughened skin unique to each animal. To scoop up copepods, the tiny zooplankton that make up their diet, right whales have gaping mouths and plates of baleen that can reach eight feet long. Their bodies defy all expectations, comically rotund yet strangely elegant as they glide through the sea. Rapt, we watch the huge mammals lunge and dive with a playful innocence that belies the gravity of their situation.

With an estimated 450 individuals remaining, right whales could be functionally extinct in 20 years. Swimming with open mouths, they easily become entangled in the ropes that connect crab and lobster traps to buoys at the surface. As they thrash to free themselves, they often make the entanglement worse. Right whales can drag fishing gear for months before slowly drowning, and collisions with ships also thin their numbers. While reliable data on ship strikes isn’t readily available, necropsies show blunt force trauma as a frequent cause of death.

It’s not the first time the species has faced an anthropogenic demise. Because they’re slow-moving and float when killed, they were named the ‘right’ whales to hunt. After three centuries of relentless whaling, right whales were reduced to an estimated 60 reproductive individuals by the early 20th century. With protections, their numbers gradually increased, and at the turn of the 21st century, there were just over 500 North Atlantic right whales—nothing near historical abundance, but a recuperating population nonetheless.

More recently, however, things have again taken a turn for the worse. Right whale calving grounds are off the coast of Georgia and Florida. Their annual summer migration takes them up to the Gulf of Maine and Bay of Fundy, where copepods were formerly abundant for the whales to feed on. But climate change is shifting copepod distributions, and right whales have been following their food farther north, up to the Gulf of Saint Lawrence. In this totally new marine environment, the large animals come into conflict with industries unaccustomed to their presence, and the whales are dying at an alarming rate.

Scientists are scrambling to understand these new migration patterns to better protect the whales. The good news is that recent management strategies—like fishing closures and shipping lane changes—show promise of keeping harm out of the whales’ way. While 17 right whales died in 2017, only two have been lost so far this year, neither of them in waters protected by the new measures.

Back in the air, the crew on the Twin Otter immediately radios in their sighting. Their colleagues on the management side need up-to-the-minute information on the locations of the whales. Aerial surveys provide that data, but daily flights are resource intensive, so scientists are developing a new generation of acoustic technologies that can lend a hand. Most intriguing is an autonomous ocean ‘glider’ adapted to monitor whales.

The instrument measures five feet and looks more like a miniature space rocket than a marine vehicle. To cover great swaths of the ocean using little energy, it harnesses some basic science. The glider changes its own density to descend, slowly. Because it has wings, it ‘glides’ forward as it sinks. At a specified depth, it automatically adjusts for positive buoyancy and ascends, still advancing forward. On a single battery, the glider can cruise along at 0.6 mph for up to four months.

The gliders are equipped with hydrophones that use clever software to compare the sounds they hear with an onboard library of whale calls. The computer makes accurate identifications, transmitting real-time whale locations directly to researchers. The hydrophones are also being tested on buoys to listen for passing whales, and because these devices can be deployed for long periods of time, they provide a wealth of data. Persistent and cost-effective, acoustic monitoring technologies will never fully replace aircraft surveys, but they’re an important part of the picture.

Closing fishing zones, rerouting ships and imposing speed limits can mitigate risks to right whales, but they don’t eliminate them. And fishing closures in particular have rippling economic effects on communities that rely on crab and lobster.

“Once we saw the presence of whales, we knew that for our fishery to survive, these whales had to thrive,” says Robert Haché of the Acadian Crabbers Association.

Fisheries can reduce their impact by using ropes with reduced breaking strength—sturdy enough to rein in traps but not a struggling whale. However, one innovation promises to revolutionize the industry: ropeless traps. Designs vary, but all allow fishers to deploy and retrieve their traps without leaving ropes in the water column. In one model, a trap is furnished with a spool of rope attached to a buoy on the end. Using an acoustic signal, the fisher triggers a mechanism to release the buoy, which shoots to the surface pulling rope from the spool so the trap can be recovered and checked for crustaceans.

But such designs have yet to achieve widespread use. On a research cruise this summer, Amy Knowlton and her team from the New England Aquarium, Dalhousie University and the Canadian Whale Institute came across whale #3960 trapped in struggle to survive. With ropes wrapped around his head, through his mouth and even between his baleen, the whale flailed in anguish. He struggled to breath, the gear covering his blowhole. “My heart sank,” says Knowlton, who has been studying North Atlantic right whales for 35 years. She thought #3960’s fate was sealed.

For hours, the crew looked on, helpless, while the whale dove repeatedly in a desperate attempt to free itself of the snare. Then, all of a sudden, it surfaced without the entangling fishing gear and took off at considerable speed. For people on the front lines, it’s the small victories that sustain the fight.

The future of North Atlantic right whales depends on our ability to reduce the impacts of fishing and shipping, Knowlton says. We can save them, she tells me with confidence. Our own innovations have pushed them nearly to extinction, but perhaps new technologies, like acoustic monitoring and ropeless fishing, could help bring these ocean giants back from the brink.