I spent last week at the International Society for Behavioral Ecology meetings at Cornell University.

Behavioral ecology, the study of what animals do and how it affects their lives, can be delightfully arcane. One research team designed a robot stickleback in order to learn how many fish it takes to persuade a school to change direction. (Early results suggest the answer is two.)

Another team found that African honeybee workers surreptitiously raise their own eggs rather than those of their queen overlords, in effect staging a bloodless coup.

Mitchell Baker, of Queens College, New York, had some amazing insights into pesticide resistance studying the formidable Colorado potato beetle. "If you leave them alone," he said, "they will eat a field down to brown sticks."

A pesticide, like an antibiotic, is supposed to kill any pest that's not resistant to it. But when survivors get together to breed, one thing they all have to bequeath to their young is pesticide resistance. "Potato beetles can evolve resistance to anything you can throw at them, usually within three generations," Baker said.

Resistance can have a downside for the beetle, though. It comes with a grab bag of handicaps. Through novel experiments at agricultural fields, Baker discovered that pesticide-resistant beetles hatch later, move more slowly, have compromised immune systems, mate less successfully, raise fewer young, die off during the winter at greater rates, and get cannibalized by their nestmates more often than non-resistant beetles.

Apparently, the genes that make a beetle resistant have such debilitating side-effects that it takes the application of deadly pesticides just for them to survive the competition. Baker's research could point to ways to postpone widespread resistance by taking advantage of those weaknesses.

It's tempting to view the world as a collection of species perfectly adapted to living together. But what I find fascinating about evolution are the compromises that constantly play out on any species' scrap heap of talents. For potato beetles, pesticides are pulling resistance to the top of the pile. But change what's killing them-a different pesticide, perhaps, or maybe hotter summers-and resistance will fall to the wayside in favor of something equally vital for the moment. 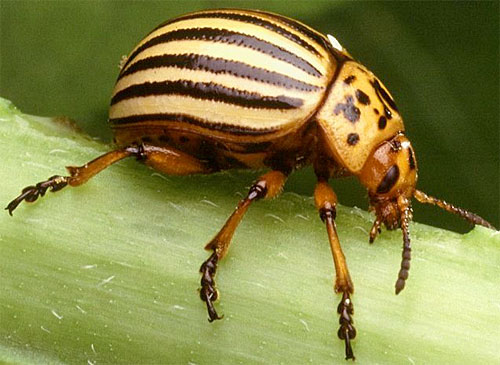