Ode to an Orca 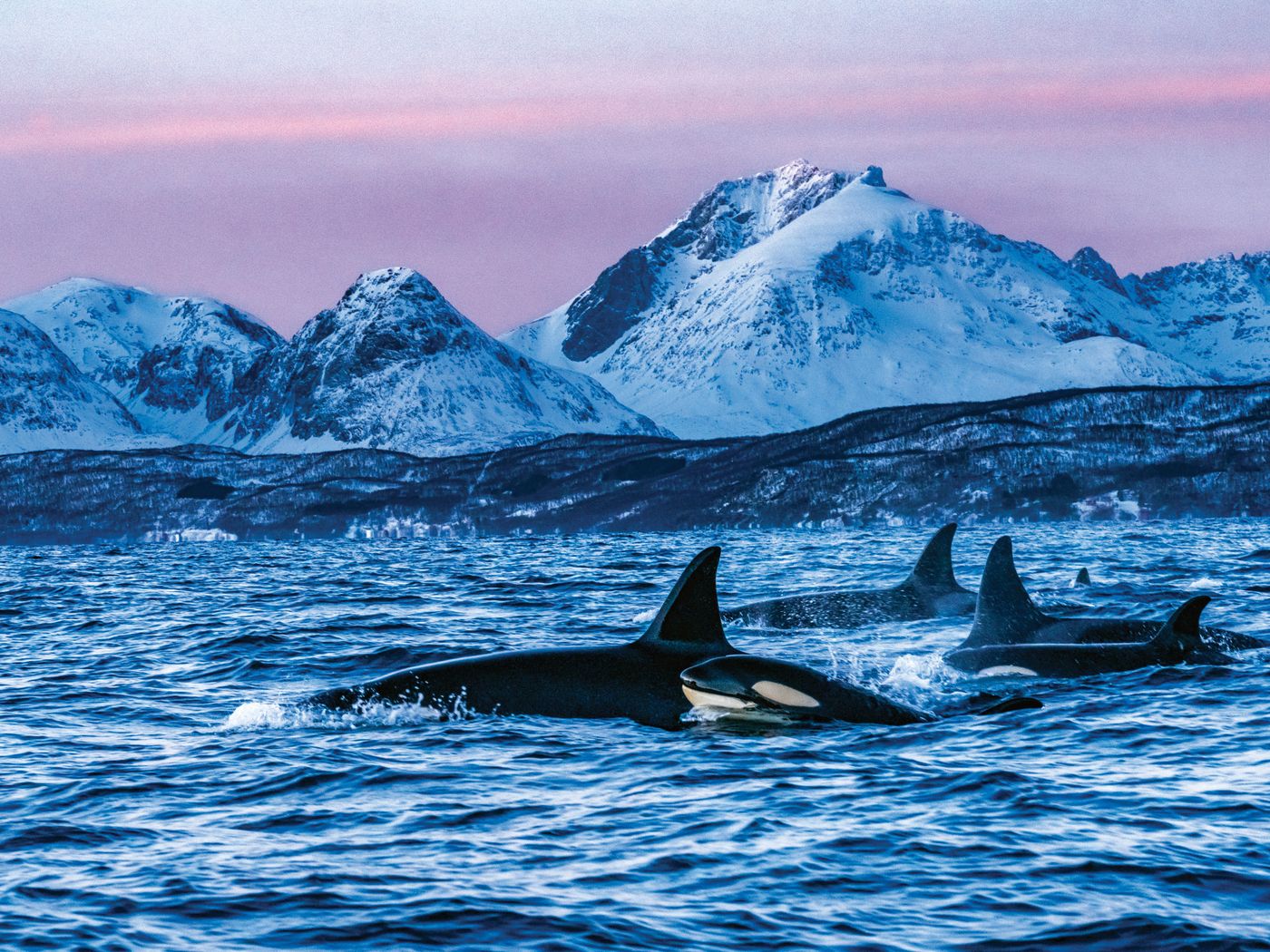 The water is cold inside Norway’s northernmost fjords. When I slipped in headfirst, wearing a thick wetsuit, the 40-degree Fahrenheit surface temperature made the water feel dense and biting on my exposed face. Diving down I felt myself crossing a threshold into another world—dark, frigid, seemingly bottomless, and home to giant carnivores that eat fish, seals and porpoises.

If you want to see wild orcas, they can be found in every ocean, from the Arctic to Antarctic. Despite their “killer whale” nickname, orcas don’t prey on humans. But they’re the largest dolphins on the planet, with seven main ecotypes that vary in pigmentation pattern, diet and sonar dialect. Members of these groups don’t usually mate with one another, though scientists are divided on whether to consider them different species. The coast of British Columbia is a popular orca-watching spot. So are Argentina’s Valdes Peninsula and Australia’s Bremer Bay.

But in most countries, there’s a limit to how close you’re allowed to get. That’s not the case in Norway, which has no laws against swimming with dolphins and whales. (The country’s whaling laws are also notoriously lax.) This makes Norway an alluring destination for orca lovers, but it can also lead to danger for both humans and animals. At one point during my visit, I saw three young tourists from Spain block a pod of orcas with their sailboat, jump into the water and try to approach by paddleboard. Their tactics scared the orcas into hiding far below the surface. What’s more, the Spanish tourists could have ended up stranded out there beyond the fjords, three miles from the nearest shoreline, left to the mercy of the fierce Arctic weather and currents.

My tour operator, Jacques de Vos, went to great lengths to avoid such situations. De Vos is a South African–born diver who has been studying orcas in this region for the last seven winters and has a reputation for being sensitive to the animals and their habitat. De Vos knows how to locate orcas without disturbing the pods or breaking up families. The orcas in this area feed on herring, which they corral into clusters called bait balls. It takes a lot of energy for cold-water mammals to orchestrate these feeding sessions, and de Vos makes sure his divers don’t get in the way. He uses his radio to stay in touch with nearby researchers so he can stay attuned to the animals’ behaviors and help locate individual members of the pods.

I went to Norway partly because the Covid-19 pandemic presented unusual reasons to photograph orcas in their element. There were far fewer commercial tours operating, so the animals would be less harassed. More important, as shipping and fishing slowed worldwide, researchers were able to identify more whale and dolphin vocalizations—not only more sounds, but ones they had never heard before.

“We’ve been hearing vocalizations that were new to us and different from what we had gotten in the last six years,” de Vos told me. “For lack of a better word, it sounds more energetic.” I was eager to feel that energy firsthand.

Before de Vos would let me swim with the orcas, I spent a day on board learning about their behavior. He tested my swimming ability, watching me carefully as I dove and climbed back into the boat, weighed down with diving gear. I listened to his instructions: Don’t swim aggressively toward the orcas. Move calmly and let them come to you. Don’t splash your flippers loudly on the surface or make jerky motions.

Before we slid into the sea, de Vos played me a recording full of clicks, whistles and zipperlike sounds. Amazingly, each orca pod uses its own distinct language of notes and tones.

Behind the orca conversations, I heard the moans of humpback whales. De Vos pays attention to humpbacks, too. They tend to follow orcas and steal their bait balls. Humpbacks can be as large as 50 feet long and weigh over 40 tons. They don’t attack humans, but once in a while, they inadvertently scoop up divers who get too close to their food. (This reportedly happened to a New England lobster diver in June. The whale spat him out and he survived.)

On the recording de Vos played for me, the humpbacks called to each other in low baritones, ascending the musical scale. De Vos explained that low and high notes travel different distances. A whale will call out to a podmate, and the pitch of the reply may indicate how far away it is. De Vos compares the giant creatures to truck drivers speaking to each other on different radio channels.

I never knew how powerful an orca’s sonar pulse could be until I got into the water and felt one reverberate deep in my chest, like the bass at a rock concert. The sensation was so weirdly moving I hooted through my snorkel, because when a six-ton orca swims directly at you and pings you with his echolocation device—trying to identify who and what is swimming in his Arctic hunting waters—you realize you are in a completely alien world.

I swam alongside this 25-foot-long male for a few moments. We looked each other in the eye before he surfaced for a breath. His six-foot dorsal fin broke the water just yards in front of me, and I glimpsed the snowcapped peaks on each side of the fjord before he accelerated back down into the darkness with one swoosh of his fluke. Through my wetsuit hoodie, I faintly heard a click and a high-pitched whistle.

Two female orcas appeared about 20 feet below me, corralling herring into a bait ball. The pair seemed unbothered as I dove down to get a closer look. They started pushing the herring toward me as if I had arrived to help.

Suddenly, the male re-emerged from the depths. As he glided next to me, his pectoral fin, nearly the size of my entire body, slid under my stomach. We eyed each other again before he rolled left and swept his dorsal fin, the size of a small plane’s tail, just over my head. The strafe felt more playful than territorial, like an orca high-five—a moment of connection with an enormous intelligent being in a place where sound is sight and the noisy natural glory of nature still reigns.

When I got back to the surface, I noticed fins all around. Then I caught a flash of white—the humpback baritones had arrived, coming in to steal the orcas’ lunch. In an instant, herring flashed and scattered as a humpback, mouth ajar, scooped up the majority of the bait ball in a single gulp. It looked like a submarine passing just below my flippers.

The early night was exploding in the green and burgundy waves of the northern lights when I met with Eve Jourdain and Richard Karoliussen, founders of the Norwegian Orca Survey. In the last seven years, they’ve used dorsal fin shapes and patterns to identify more than 1,200 of the estimated 3,000 orcas that winter in Norway. This work is crucial: Right now, the International Union for Conservation of Nature classifies orcas as “data deficient.” Some of their populations might be endangered, but there just isn’t enough information to be sure.

Karoliussen and Jourdain are the only researchers in Norway doing this kind of meticulous tracking. Jourdain is a postdoctoral research fellow at the University of Oslo. Karoliussen, a Norwegian boat and drone pilot, grew up eating whale meat. “I used to see whales as just another fish,” he says. “Today I see incredibly intelligent animals.” He and Jourdain take blubber biopsies to check the orcas’ diets and measure hormonal levels for stress indications. They suspect their data will show a decrease in stress levels during the pandemic.

I showed Jourdain the underwater photo I’d taken of the male who’d given me a high-five. “That’s Melvin. He is 25 to 30 years old.” He comes every year, she said, and he only eats fish, not seals like some other orcas. Melvin was caught in a fishing net in 2016, she told me.

The next day, I joined Jourdain and Karoliussen on their small research boat. In the amber light, they communicated by radio with de Vos and another freediving outfitter called Valhalla. By 11:30 a.m. we were following a pod of eight orcas, carefully matching their speed while keeping our distance. The pod kept surfacing near us as we moved steadily southeast. Jourdain photographed individual dorsal fins for the database.

A few minutes later the orcas’ misty spray was right next to us, just before their bodies slid beneath the water and out of our sight.