Nine of the Weirdest Penises in the Animal Kingdom

A short list of some of nature’s most curious phalluses, from the echidna’s four-headed unit to the dolphin’s prehensile member 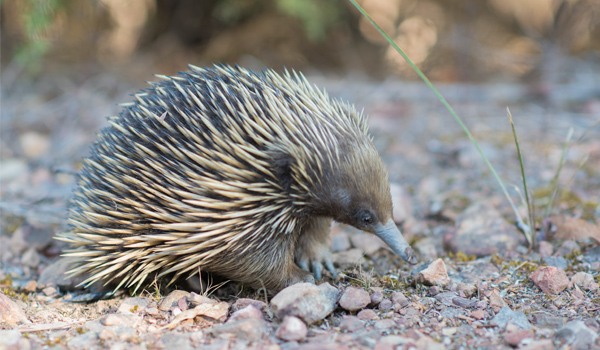 Echidnas have a four-headed penis, though only two heads are put to use at a time. pen_ash via Pixabay under [CC0]

Birds have them, bees have them, even regular old fleas have them, but in the animal kingdom, no penis is exactly like the next. Across vastly different species and ecosystems, unique environmental pressures have allowed creatures of many species to evolve an array of shapes and sizes—from the electric blue penis of the leopard slug to the blue whale’s ten-foot phallus.

The more scientists learn about penises, the more they realize how varied sex organs are. Just ask Emily Willingham, a biologist and journalist who’s been studying penises for over a decade. Her book, Phallacy: Life Lessons from the Animal Penis, hit shelves in September. Phallacy plunges readers into the wild and wacky world of animal genitalia while exploring the social and cultural significance of penises as symbols of power and identity.

Penises have been a longstanding subject of scientific fascination, and they’re far more studied than vaginas. One explanation for this research gap, says Willingham, is “because of who has been asking the questions until quite recently, and who's been deciding how those questions should be answered.”

Typically, a penis helps male animals reproduce sexually with a female—however, exceptions exist. Gender and sex rarely fit into tidy categories and animal penises are no different. Many of the creatures packing the most surprising phalluses are hermaphrodites, meaning they also have female reproductive organs.

“There's not a binary that is categorically one thing or the other when it comes to genitalia,” says Willingham.

These blurred lines often give rise to nature's most fascinating sexual organs. Here are eight penises that are as cool and surprising as the creatures that wield them:

Heads Above the Rest

Sometimes one just isn’t enough. Or so it seems for the echidna, a spiny egg-laying mammal, which has evolved a four-headed penis. During copulation, echidna penises operate on a part-time schedule: half the penis temporarily shuts down while the other two heads are responsible for fertilization. But those extra two heads aren’t there just to show off. Next time the echidna mates, he’ll alternate which half he uses.

By shutting down half of their penis at a time, male echidnas fit perfectly with the female’s two-branched reproductive tract. This creature’s coat of quills don’t spare its genitalia, which features penile spines—a horrifying frequent trait in the animal kingdom (even humans once had them) which may increase fertilization success or trigger ovulation.

Dolphins are known for their intelligence, promiscuity and absurdly dexterous penises. They have a prehensile penis, meaning it can swivel, grab and grope, much like a human hand. A prehensile penis helps males navigate the complex, labyrinth-like reproductive tracts of female dolphins.

Dolphins don’t just use their penises for baby-making, either. Bottlenose dolphins frequently copulate for pleasure, and often with members of the same sex. Dolphin sex doesn’t last long, only about ten seconds, but males can ejaculate multiple times an hour.

Fencing With a Phallus

En garde! Many animals use their penises for love, but flatworms also use theirs to fight.

Like many organisms with intriguing phalluses, flatworms that engage in penis fights are hermaphrodites—just one example that showcases how a sex binary system fails to account for the range, fluidity and diversity of many organisms. Some species of flatworm engage in this duel to see who can inseminate the other.

Their two-headed penises resemble tiny swords, and battles can last for up to an hour as they take turns attempting to stab the other. The winner pierces the flesh of the other flatworm to deposit their sperm, something scientists refer to as “traumatic insemination.”

Mating can be competitive, with a single flatworm fertilizing another. In other cases, like with the tiger flatworm, they can play both roles: each flatworm gives and receives sperm from its partner.

Blue whales are the largest creature to ever roam the earth, and they certainly have the phallus to match. Blue whale penises range between eight and ten feet, with a foot-long diameter. Each of its testes along can weigh up to 150 pounds and can ejaculate gallons of sperm in a single go.

Whale penises are so famously oversized that in Moby Dick, Herman Melville suggests using the skin of a sperm whale’s phallus as a floor-length apron to stay tidy while skinning the rest of the whale. We’ll have to take Melville’s word on that one.

The blue whale might have the world’s biggest penis, but size is relative. Barnacles have the biggest penis-to-body size ratio, with genitalia nearly eight-times their total body length.

Barnacles are stuck in place for life, so they use their super-long penises to reach other nearby crustaceans, blindly depositing sperm inside their neighbors. Like flatworms, barnacles are hermaphrodites that can fertilize others, be fertilized or both.

Scientists have found that barnacle penis features change based on where they live. Those in rougher waters have shorter, stouter penises, while those in calmer areas have long, slender penises.

If humans had the same penis-to-body-sized ratio as barnacles, our penises would be as long as a humpback whale, so about 50 feet in length, says Willingham.

Bed bugs are famous for their aggressive, stabbing sex. Sometimes, overzealous males kill females with their saber-like penis in the process.

Willingham explains that this violent process has caused bedbugs to evolve “something very vagina-like where they tend to get stabbed.” This special less-armored area of their abdomen might minimize harm as the male injects his sperm into the female’s circulatory system.

Not much shocks Willingham about animal penises anymore, but she says she was surprised to learn about a microscopic, eyeless cave insect, which upends how scientists understand sex.

Males of the species have a vagina-like pouch containing sperm, while females have a special penis-like organ that penetrates and vacuums up sperm from the male.

Unlike other species that use a similar process—butterflies, mites, beetles—males of these species don’t have a similar penetrative organ, only the females do, says Willingham.

Meet Chromodoris reticulata, a type of sea slug, that has to reckon with a scary reality: sex means saying goodbye to their penis. At least, for the day.

Chromodoris reticulata are hermaphrodites and fertilize each other simultaneously during sex. Each has a three-centimeter-long schlong, but they only extend a centimeter of their penis when copulating. After sex, they shed their single-use penis into the ocean’s abyss. But this loss doesn’t mean their sex life is over: they have at least two more disposable penis segments hidden away. As soon as 24 hours later, the slug will be back in action.

Sometimes, penises pose logistical challenges. That is certainly the case for the leopard slug, which is so well-endowed that it has to go to extreme measures to reproduce.

Mating leopard slugs dangle from branches by a shared rope of their own slime with their penises hanging below. As hermaphrodites, these slugs inseminate each other during sex so, once the action starts, two penises are on display. And their penises are easily spotted: They’re electric blue and roughly the size of the slugs themselves.

“You just need to go look that one up,” says Willingham. You can see a video of the slugs in action here.

The act is a messy tangle, but nothing goes to waste. Once copulation is complete, one partner slurps down the slimy sex rope as a post-coitus snack.