Here at the Gist we try to keep you on top of breaking science of all kinds. Sure, you get popular hits like massively expensive particle accelerators and nail-biting Mars touchdowns. But we reach deep into the heart of science, too, bringing you topics like top-quality dingo urine and paranoid squirrels.

This week we learned that dogs can catch yawns from people. And the evidence on this one is pretty solid. It comes from a controlled experiment conducted on 29 dogs of different breeds and posted this week in Biology Letters, the top-flight journal of the Royal Society of London.***

A stranger sat in a room with each dog for five minutes and either (a) started yawning (with sound effects) or (b) simply opened his mouth wide, but without moaning or even scrunching up his eyes. (The authors include a great photo-sequence of the two facial maneuvers [subscription required].)

The results came out clearer than a Higgs boson in a 17-mile Swiss tunnel. Not a single dog yawned when confronted with a simple open-and-close of the mouth. But on average, after watching just a minute and a half of real yawning (equal to about 4.5 yawns), the dogs opened wide. Only a few were totally immune to yawns, including a weimaraner, a shih tzu, a Jack Russell-corgi mix, and a great dane. 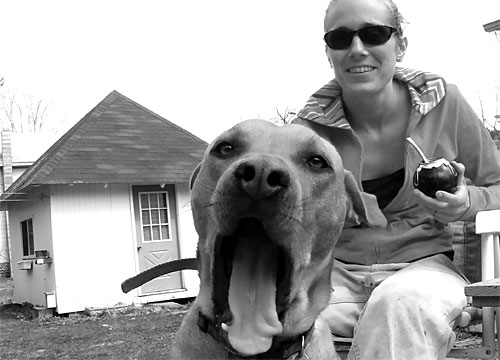 One dachsund resisted yawning, but he was offset by three others that yawned with aplomb. Prolific yawners included a lab and a Staffordshire bull terrier, with four yawns each. But the champion yawner? Big surprise: a border collie, the smartest dog in the world. He probably also had an opinion on which statistical analysis to use.

Here at the unofficial Gist Center for Animal Psychology we attempted to replicate the experiment on a Rhodesian ridgeback mutt (above). He took considerably longer than 1.5 minutes to start yawning, and then only because one experimenter was scratching him behind the ears, which he really likes.

***In the world of animal cognition, this actually is pretty neat research. Lots of animals yawn, but the only animals known to pass yawns from one to another are humans and chimpanzees. This finding suggests dogs really do empathize with humans to some extent - and in any case it says something pretty neat about the ways domestication has caused our evolutionary histories to become intertwined.