How are you celebrating The Year of Phage? Even if you've never heard of these tiny, bacteria-killing viruses, you have definitely encountered them. Trillions of bacteriophages, or phages, and similar viruses exist on the planet, and in many places they even outnumber the local bacteria.

Phages specialize in infecting bacteria and swapping genes so they can use their hosts to replicate. In their various forms, phages ultimately drive biological processes inside the body and across ecosystems. Now, a century after their discovery, there's still much to learn about these tiny creatures and their tantalizing possibilities—like how to design engineered phage viruses that can assassinate even the most drug-resistant bacterial infections.

San Diego State University's Forest Rohwer, co-author of Life in Our Phage World, explains why he wants the world to mark 2015 as the Year of the Phage:

It's been 100 years now that we've really known about these things. Depending on exactly who you want to say first discovered phages, the first pretty concrete example was in 1915. [British bacteriologist Frederick W. Tort is generally credited with the discovery.] And now, after a real slowdown in the number of people in the field, I'd say there's been a resurgence over the past ten years or so. People are recognizing that these things are major players in ecosystems, microbial diversification, gene sharing—all over the place. So you can really become involved and contribute in this field and discover some new, big and important things. From a biologist's point of view, that's a lot of fun.

The fact that they are so ubiquitous is almost a little disconcerting.

There are like 10 million phages in a single milliliter of seawater and close to 100 million of them in a gram of soil. They really are everywhere, in essentially everything that you can think of, and they are incredibly diverse. But they are just part of the system. They are totally harmless to us, in most cases. In fact, they are probably helping us for the most part.

What kinds of things do they do?

Well, a zombie comparison is correct for one behavior. Phages go in and they make their DNA part of bacteria's DNA, and that often makes bacteria do different things than they otherwise would have. One good way to think about how it works is imagining symbiosis across a wide range, from pathogens to mutualism. In any such system you look at, it looks like the genes that are doing the local adaptations are acquired by transfer. In the human gut, for example, you have a certain set of bacteria that live with you, but what happens over the course of a lifetime is that those bacteria will acquire genes [from phages] that can either be helpful, harmful or neutral to the host.

So this DNA swapping can have a huge range of results?

Right. That's actually the area where phages can sometimes be harmful to people, when the genes that cause a disease are carried by a phage. So a lot of pathogens only exist because a bacteria that isn't normally a pathogen has different genes added by a phage. Probably the most famous example is cholera, where they really know well how the phage causes that disease. It also happens with a lot of the E. coli strains that cause food poisoning. 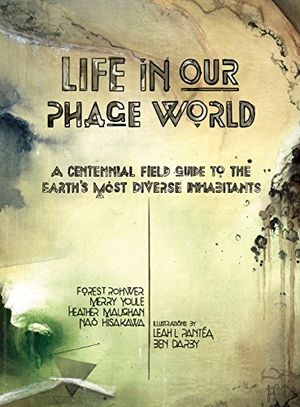 Life in Our Phage World

What about the helpful side?

If you look across a coral reef, you have basically the same types of bacteria associated with the reef. But then you see in different places, different genes have been acquired that allow bacteria to adapt to their local conditions. And in that case it's a good thing, as far as promoting the overall health of the reef. The other side is just killing bacteria, because that is their food item. That's really the other main thing that they do.

How can this bacterial assassination work to target disease?

That's been a thought for 100 years. Originally people thought they had found a magic bullet, microbes to kill off microbes. But then we began to use antibiotics, and for the most part those are what we still use today. The places where they may use phage therapy a lot would be in Russia or Poland. But there's kind of a movement to use them again in the Western world, particularly as many bacteria have become resistant to antibiotics.

Why is their potential to fight disease so great?

There are a few advantages. Antibiotics basically kill all bacteria, or a large part of them, and you don't want that in many cases. You don't want to kill all the bacteria in your gut every time you have that infection. That's why the phages are so interesting: They target and hunt a particular strain of pathogen. Also, one phage becomes a million in a couple of hours. An antibiotic will never amplify, you have to keep putting them into your body. But with phages, if the target bacteria are there, it will attract more of these things that are killing it, which is what you're hoping for. And then when the target bacteria are gone, the phages that feed on it should be gone also.

Can we create phages artificially so that they will target exactly the harmful bacteria we're after?

Yes. I think isolating them from the many different phages in nature has a bit of a sordid history—sometimes it works, sometimes it doesn't—and from a regulatory standpoint that's always going to be a little sketchy. I believe that synthesis is the way we're going to go. We've been engineering them for quite a while, since the 1970s or maybe even earlier, and we know a fair bit about them. You can just take a specific piece of DNA, add it to a test tube that has the protein parts that make up a phage, and you get a viable phage out of that. The DNA initiates the creation of a viable phage, so it's really a kind of magical nanomachine.

It sounds ideal, so what's the holdup on new phage treatments?

We spend hundreds of millions of dollars developing an antibiotic. So far, there really hasn't been that kind of investment that you'd need to develop phages to the level where most of us would be comfortable using them. If I have a bacterial infection, I'm still going to go with the antibiotics right now.

How much do we still need to learn after a century of phage study?

We know a lot about some of them because they were the tools used to develop molecular biology, find out how DNA works and really learn how to study things at a molecular level. So in that case we know a lot. When it comes to what's going on in the environment, we know in very broad strokes what kinds of things they are doing, but about the specifics of what's going on, even in the human body, we know very little.

Their genetic diversity, which is mostly unknown, is incredible. In most fields we may say we don't know what a particular gene is doing, but at least we've seen it before. With phage stuff you can go into any environment you want to pick and most of the genes they are carrying, maybe 80 percent, we not only don't know anything about those genes, but we've never even seen them before. It's a beginning science at this point, and there are new discoveries going on all the time. It's one of those places anyone can go and you're basically guaranteed to find something cool.