What is butter? Is it a condiment? A baking fat? The scientific product of an intense process involving matters like temperature, friction, and fat content? Or something more like a miracle? It’s all of the above, argues food writer Elaine Khosrova in her new book, Butter: A Rich History.

Butter was discovered, most likely, by accident. Khosrova suggests it was probably the result of a Stone Age herdsman storing his milk inside an animal skin, and a bumpy ride agitating that milk into greatness. Khosrova writes that early people couldn’t understand the seemingly magical process by which liquid cream was whipped and beaten into a rich, golden, semi-solid state. Nor could they always reliably make it happen. This unpredictability cloaked butter in an aura of mystery and reverence. In preindustrial Europe, Khosrova writes, the dairymaid occupied a vaunted status, “at once a paragon of domestic virtue and a hidden dairy cabalist.”

Butter’s history is spread worldwide, meaning Khosrova’s journey to study its origins had her hopscotching the globe. Along the way, she traveled to Bhutan to witness the making of yak butter in an ancient style, toured the Butter Museum in Ireland, and watched the ritual sculpting of the Iowa State Fair butter cow. She also studied 20th century health fears about butter, which have, in recent decades, begun to turn around. (American butter consumption recently hit at a 40-year high, with each of us eating an average of 5.6 pounds a year.)

We interviewed Khosrova about humankind’s long, torrid, not-always-smooth affair with a food many of us love but take for granted. You’ll never look at this golden toast-topper the same way again.

How did you get interested in this, er, rich topic?

I’ve been a food writer since 1990. Before that I was a pastry chef. For most of my career, I was deeply involved in food—whether it was hands on or writing about it— but I didn’t give butter much thought at all. It’s sort of an incredible irony that I sort of woke up one day to how unique and almost mysterious it is.

About nine years ago, I was working for a restaurant trade magazine and I had to do a lot of product tastings and write them up as product reviews. One day I had 12 or 15 different butters on the table. I wasn’t thinking much about it—it’s so elemental, butter; how different could they be? I had tasted really nice French butter, I knew the difference [in taste of] a higher fat butter, but I hadn’t really give it much attention.

That one day was a little bit of an epiphany because I had them all in front of me. The textures were impressively different, from kind of slack and greasy to an almost fudgy, waxy rich texture. And the flavors evolved from something kind of sweet and milky to something quite tangy, and others were pretty salty. I was like, “Huh, I can’t really explain how this happens.” I went to get a book on butter—and there wasn’t one.

I’ve always loved butter. So now I really wanted to understand it better. I got to understand how dynamic the butter-making world is, where you have three things that come together: man, land and beast. If you look at this globally, there’s so much variety among those three elements.

You write that “since many large dairies succeed or fail based on the volume of their milk production, Holstein (cows) continue to be the most common cow in our national farmscape. They’ve been bred to ably top the charts of milk output … but not necessarily make the most or best butter.” Can you tell me more about what breeds of cow make the best butter?

Holsteins produce a ton of milk. It’s perfectly good milk. But when you get into butter makers and cheese markers who are really concerned about the protein content, the solids, the butterfat content, they’re looking at other breeds. Jerseys are really popular; Guernseys make fabulous cream; Brown Swiss is another good breed.

Much depends on what that animal is fed, how old the animal is, and the period of lactation. —There’s an incredible number of variables. But, in general, if I was going to go out and make butter tomorrow, I would love to get my hands on Guernsey cream. 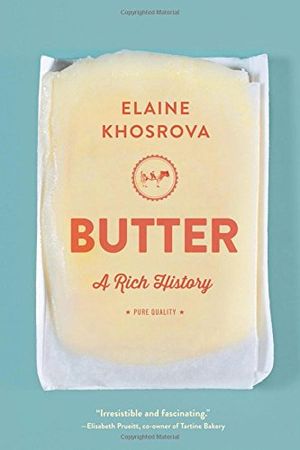 From its humble agrarian origins to its present-day artisanal glory, butter has a fascinating story to tell, and Khosrova is the perfect person to tell it.

We know that butter-making goes way back. Neolithic communities used animal skin pouches that they filled with milk, hung and rocked for butter making, while you write that “Sumerians of 2500 BCE used special terra-cotta jugs for holding the milk and a plunger-type tool” for churning. By the first century CE, you write that butter was common in much of the developing world, although olive oil was more popular in the Mediterranean. Tell me about some of the more unusual historical uses for butter.

The Greek and Romans didn’t consider butter really food. They didn’t like it; it wasn’t part of their cuisine at all. But it was in their medicine chest. They used it to make different ointments, and they had weird remedies using butter applied to various orifices on the body.

It was considered a mystical, magical compound and many early cultures really did feel that way because they couldn’t explain how it happened—how is it that you have milk and hidden within that milk is this substance we get when we churn it, although sometimes we don’t get it when we churn it? They didn’t have the science to understand how butter happened, they just knew it was kind of this magical thing, like rainbows, and pearls in oysters. So butter always had that quality and that mystique about it. That’s why you found so much butter used as a ritual tool in early civilizations—from the Sumerians to the Vedic Aryans to the Druids. And certainly the Tibetans with their tormas, their butter carvings, that are still being done today.

You write that in pre-industrial Europe, butter was often adulterated. I’m curious what it was adulterated with.

Usually anything that would add weight, because they were selling it by the pound. So you could get rocks in the butter, old turnips, things that were dense. There was also a lot of coloring added. You had “May” butter, a beautiful golden butter, which was natural, because cows were on fresh grass getting more beta carotene, so that made their butter this gorgeous yellow color. But people figured out that they could dye the butter and get more money for it. There were all kinds of shysters in the butter world.

You say that “milk fat is a complicated mistress.” Can you elaborate?

I’ve made butter myself a lot. You need headspace [room for air in the churn], and the right temperature, and the right proportion of fat. But also, in the industrial world, it’s complicated because they’re going for a really velvety cohesive beautiful texture, and the way that you get that is by tempering the cream—it’s called physical ripening. The process changes depending on the season of the milking. The temperature goes up, and then they bring it down, and then it goes up a little bit, over 12 to 14 hours. The aim of tempering to get this ideal ratio of liquid and crystalline fats. If you have a lot of liquid fat you end up with a greasy butter, and if you have a lot of hard fat, you end up with one that’s more brittle, that doesn’t spread nicely.

[The home chef] could sometimes get lucky and end up with a cream that just naturally has the right proportions, and I’ve had a couple of butter batches that I was very pleased with, but the amateur can’t really control that very much.

Is butter always the best fat for a baked good in your opinion?

Certainly for flavor, you can’t beat butter. As far as getting great texture, you can get great textures from margarine products. But it won’t have the same mouthfeel, it won’t dissolve in your mouth the same way. Butter can trap air and make things lighter. It makes things richer and lighter. I do like lard in pastry crust, it’s really great to work with, but most people are put off by lard. It can have a slightly meaty quality.

If you put in oil, you would find that [baked goods] are heavy. If you want the texture of a carrot cake or a dense muffin, oil is great. But if want a fluffy tender buttermilk cake or a lovely layer cake, you can’t beat butter.

For decades there’s been a huge butter versus margarine debate. You really looked into this—what’s the latest science on the health differences between them?

They’ve taken the trans fats out of margarine, so we can’t make that an indictment anymore against margarine. [Editor’s note: According to the Food and Drug Administration, “various studies have consistently linked trans fat consumption to heart disease.”] However, vegetable oils [that go into margarines] for the most part are a highly synthetic food. They go through a 20-step process involving a lot of chemicals and bleaching agents and things that vacuum off any flavors and change the color. So it’s a very unnatural product.

Looking at the big picture, when we started to have more heart disease after the Second World War, we were essentially increasingly doing everything that was bad for our hearts. We were eating more processed foods, we had the trans fats from margarine, we were more sedentary, we were eating more sugar, we smoked more, we had more stress—all of these things were on the rise. And we’re blaming butter for heart disease when butter’s been around for thousands of years! We’re so eager to have one demon that we can slay, and its mostly fallen on butter.

You suggest in the book, though, that there is such a thing as eating too much butter. Why is that?

It’s a very rich food, and unless you’re a lumberjack, you can’t use that much caloric download every day. I study food and nutrition and I keep coming back to the same old not-sexy message of moderation. I wouldn’t tell people to eat a stick of butter a day. But they should certainly enjoy a nice big piece on their mashed potatoes or cook their fish in it with some fresh herbs. You don’t need a lot of butter. A little goes a long way.

This interview has been edited for length and clarity.