Don’t get him wrong: Dean Burnett loves the brain as much as the next neuroscientist. But if he’s being honest, it’s “really quite rubbish in a lot of ways,” he says. In his new book, Idiot Brain, Burnett aims to take our most prized organ down a peg or two.

Burnett is most fascinated by the brain’s tendency to trip us up when it’s just trying to help. His book explores many of these quirks: How we edit our own memories to make ourselves look better without knowing it; how anger persuades us we can take on a bully twice our size; and what may cause us to feel like we’re falling and jerk awake just as we’re falling asleep. (It could have something to do with our ancestors sleeping in trees.)

We caught up with Burnett, who is also a science blogger for The Guardian and a stand-up comic, to ask him some of our everyday questions and frustrations with neuroscience.

Why is it that we get motion sickness when we’re traveling in a plane or a car?

We haven’t evolved, obviously, to ride in vehicles; that’s a very new thing in evolutionary terms. So the main theory as to why we get motion sickness is that it’s essentially a conflict in the senses that are being relayed to the subcortical part of the brain where the senses are integrated together. The body and the muscles are saying we are still. Your eyes are saying the environment is still. The balance sense in the ears are detecting movement. The brain is getting conflicting messages from the fundamental senses, and in evolutionary terms there’s only one thing that can cause that, which is a neurotoxin. And as a result the brain thinks it’s been poisoned and what do you do when you’ve been poisoned? Throw up.

Why is it so hard to remember the name of someone you’ve just met, even when you recognize their face?

The problem is, when you meet someone, they don’t just tell you their name. They tell you who they are, why they’re there—it’s a conversation. So there’s a lot of information that needs to be learned in one go, and a lot of time we don’t have the capacity for it. You’d have to repeat it— “Tom, Tom, Tom, Tom, Tom”—so it goes into your long-term memory. But if you do that to someone, they’ll never speak to you again, so remembering their name is pointless.

The brain has a dedicated region for faces. And the brain is very visual. That is by far the most dominant sense. Anything visual has got a much better chance of being lodged in the brain and staying there. A lot more work is required by the conscious part of the brain to take in and remember a name.

In the book, you talk about a phenomenon you call “confident clowns and insecure intellectuals,” pointing to research showing that in Western societies at least, less intelligent people tend to be more confident about their abilities than more intelligent people. Why is that?

The theory is that the more intelligent person is a lot more aware of what there is to know and what they don’t know. The brain can appraise itself, but that’s a skill that requires intelligence. If you’re very much unintelligent, then you struggle to recognize how intelligent you are compared to others. As a result, you say things with supreme confidence because you can’t quite grasp the fact that you might be wrong. 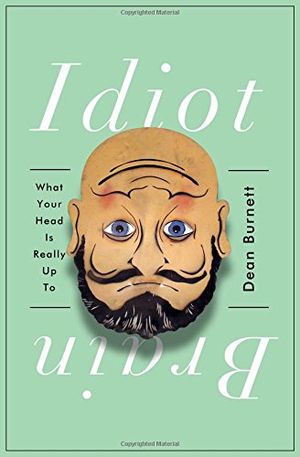 Idiot Brain: What Your Head Is Really Up To

The research into this area is called the Dunning-Kruger Effect. Can you tell me what inspired it?

The two scientists who named the phenomenon were inspired to look into it by a report in America of a criminal who was arrested when he tried to rob a bank with no disguise. It turned out he had rubbed lemon juice on his face because he’d read that lemon juice is used to make invisible ink, so he thought by rubbing it on his face he would be invisible to security cameras. The fact that he was so confident in his deduction that he actually went and committed a felony in broad daylight in front of security cameras … led to an interesting area of science.

Research seems to show that more intelligent people use less brain power. Why?

[Researchers were] putting people into fMRI machines and giving them intelligence tests—deductions and puzzles. It turns out the people who are better at doing the tests, who can solve them faster and more efficiently, were showing less activity in the intelligence part of the brain. Which is obviously puzzling—if that’s the intelligence part of the brain, why are people who are more intelligent not using it? The main theory now is that it means this area is more efficient. It doesn’t need to work as hard to do the same effort as one who is less intelligent because it’s better connected, it’s more integrated.

So we think that more intelligent people have better connected brains?

That seems to be the general consensus in a lot of fields now, that intelligence isn’t just a mark of a few particular areas being big or small. It’s the number of connections between them.

You write that acetaminophen, the active ingredient in painkillers like Tylenol, can even be effective for the heartache one experiences after a breakup. How can that be?

Yeah, that’s a weird one, isn’t it? When people say heartbreak hurts, they’re normally speaking metaphorically. But in terms of the brain, it does use the same region to process the discomfort and unpleasant sensations of a relationship breakup as it does with physical pain. So a medication like acetaminophen which works on those areas of the brain would technically have the same effect on both physical pain perception and emotional pain.

What makes you so fascinated by the ways in which our brains trip us up?

It’s sort of a subconscious protest against the way the brain is held in such reverence and awe. I mean, it is amazing, it is fantastic. But it’s got this mystique around it, in which people seem very reluctant to contemplate that it’s in any way flawed or imperfect. And it is. When you have a weird compulsion to do something, or a weird reaction, or an illogical response, you’re not an idiot. You’re not flawed in some way. That’s just a consequence of how the brain works. Don’t feel bad about it.

This interview has been edited and condensed for clarity.