Neuroscientist David Eagleman on What Is Possible in the Cosmos

The author tackles where the human brain and astronomy intersect 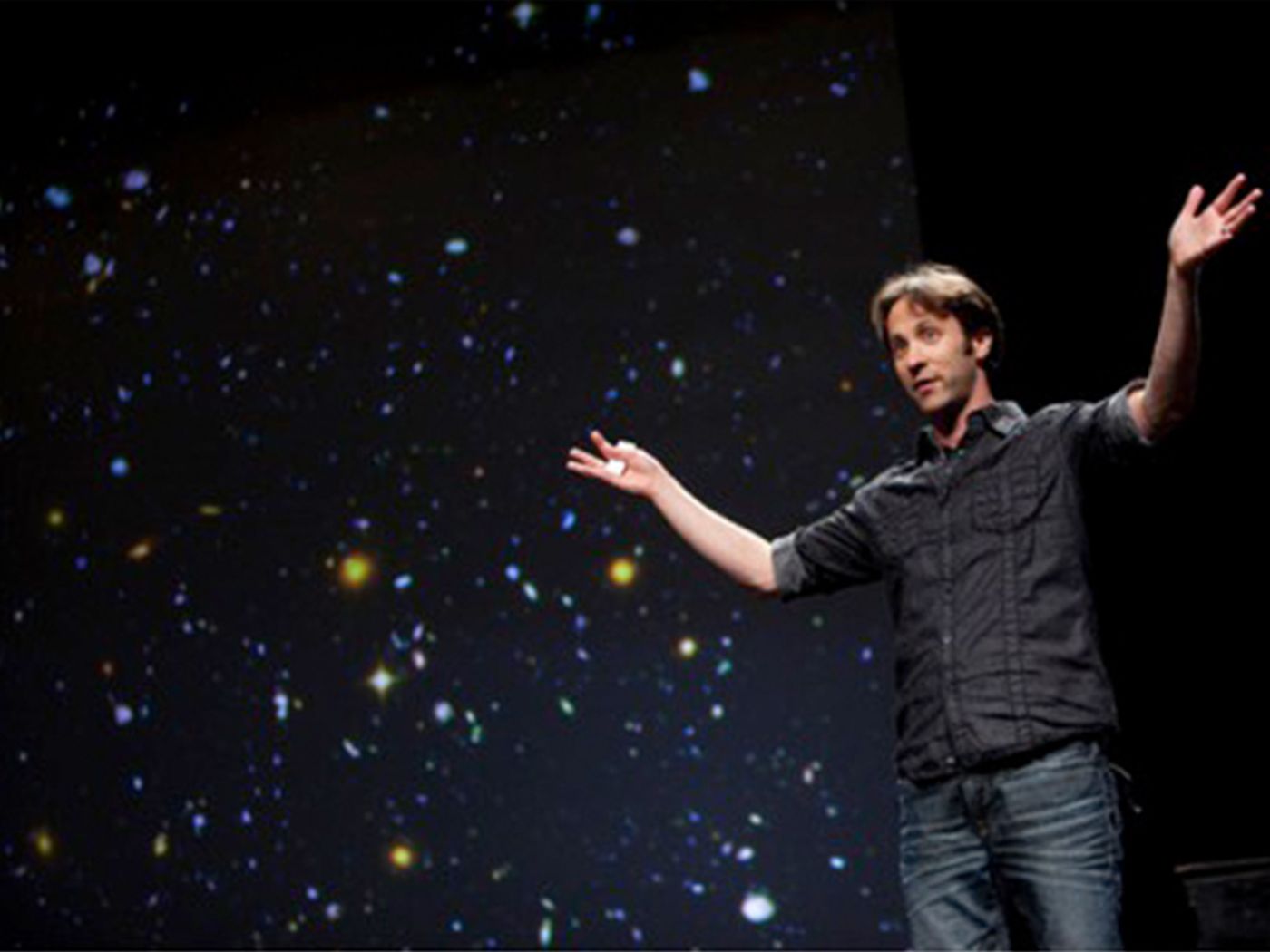 David Eagleman is a neuroscientist, author, and entrepreneur. He heads the Laboratory for Perception and Action at Baylor College of Medicine which explores topics ranging from sensory substitution to neurolaw to time perception. Eagleman is also a prolific writer who has authored works of fiction and non-fiction alike. His book of short stories entitled SUM: Forty Tales from the Afterlives, was named Best Science Book by New Scientist, and his book on the underlying processes in the brain, Incognito, was a New York Times bestseller.

In 2009, he founded the Possbilian movement as a response to what he views as our ignorance of the full probability space in the cosmos. Eagleman a board member of The Long Now Foundation which is working to make long-term thinking more important in our society. He is also is TED speaker and a Guggenheim Fellow, as well as the writer, producer, and host of PBS’s Emmy nominated documentary, The Brain with David Eagleman.

I spoke with Eagleman recently about science and about whether what we learn about the universe affects how he approaches his research as a neuroscientist. [Full disclosure: I have known Eagleman as a friend and colleague since 2008.]

How did you come to be a scientist? What drew you to it in the first place?

I took some philosophy classes as an undergrad and I started feeling like I couldn’t escape this notion that if we could understand the perceptual machinery by which we were viewing the world, a lot of the questions we ask would be changed or would be different questions all together. In other words, the questions that we ask are based on they way that we see the world and what we take to be reality, but it actually doesn’t make that much sense.

This is where neuroscience really has a lot to say to philosophy in a cool way that wasn’t even appreciated or true decades ago… I think that you can’t have a complete philosophical discussion until you understand the constraints on what we take to be reality and how different we can be from moment to moment.

How does cosmology inform your view of the world?

I would say that cosmology has had a big influence on me. Years ago I became a Possibilian. That is the way that it influences me. With a cosmos so large and we don’t even have a single answer yet in terms of “what is …” What we do know from physics is everything that we discover, really since over a century now, it’s all stuff that we can’t really wrap our heads around. I try to keep one finger on new physics discoveries and what’s going on with dark matter and dark energy, and the Higgs Boson, and gravitational waves, but it’s all so completely foreign to us because we’ve evolved to function on particular scales of space and time. And that’s what we’re good at: seeing and hearing on that scale and thinking on that scale. But essentially as we scratch the borders of reality, we realize that it’s something that we just can’t intuit or understand. It’s not like that we just say “Oh that’s it. That’s how the pieces fit together.” Instead, every time we discover something it’s like “What does that mean?”

What do you see as the intersections between neuroscience and astronomy?

My biggest interest in astronomy as a biologist is finding life on other planets. We essentially have an n=1 example and so we have the way that Earth based organisms function and we think okay we'll that's got to be it - the instructions are given by DNA, and that turns into amino acids, and proteins, etc. But there are probably hundreds of ways that you could do it. Maybe that's even an "underexaggeration" that just shows the limits of my imagination, there could be thousands of ways.

Our whole notion of reality and what we see, what we take to be reality is completely constrained by our biology; the way we see and interpret in the world around us have everything to do with the receptors we come to the table with. So when it comes to trying to understand something like the cosmos, we impose our own notions on it, which is fine, except that our own notions are unbelievably small and constrained by the type of creatures that we are.

I think about this a lot, and this is what my TED Talk last year was about. When we think of the cosmos, we’re so unbelievably constrained - our biggest thoughts are so ridiculously small. They’re like the thoughts of a grasshopper thinking about what does the Earth contain or something. We’re just inherently really limited in thinking about this.

I feel like what you're saying is also really tied into how we talk about things, language-wise - we always have to use analogies. So we say that this big canyon on Mars is “x” compared to the Grand Canyon and this mountain on Mars is “x” compared to Mount Everest. We always have to relate it to something that we know. Maybe as a safety or something?

Well it's not just that. Everything that we learn is in relation to other things. This is what's called an associative neural network. It's actually impossible to talk about something that doesn't relate to anything that we know. Like if I say ‘Oh there's a new color called “schmerie”’ and you say ‘Oh what does it look like?’ and you've never seen it at all, then that's the end of the conversation. There's no way for me to describe it to you. Everything exists in relation to what we already know. In some sense that gives us the capacity to remix the world and come up with new stuff, but at the same time it kind-of limits us.

Does what you learn about the universe out there influence how your think about the “innerverse” of ourselves?

I guess the main thing from that point of view has been the explosion of exoplanets. We’re not very good at imagining aliens as being other than what we are, with maybe a few tweaks here and there…maybe a different color…but nothing terribly different. Yet, there’s no real reason to think other creatures will use DNA the way we do. They’ll have a completely separate way of doing it in theory. Just everything will be different. Presumably they won’t have eyeballs and noses and ears and so on but they’ll have different ways of picking up the signals that are important for their planet and their star system – assuming evolution even works the same way, and let’s make that assumption for a second -- then they’ll for sure be crafted to fit a completely different eco-niche. One of the things that always struck me as interesting, is whether we would have any chance of talking with them. We can’t even talk with dolphins or kangaroos; we have no real relationship with them and they’re our neighbors. The chances that we’d be able to talk with aliens seems really low.

That’s why I’m so excited about the recent announcement by Yuri Milner and Stephen Hawking of this new nanocraft idea to get to Alpha Centauri. I mean it will take many, many years to get there, but it might happen in our lifetime. And if they can send pictures back, it’s just so incredible to think about what that will mean. I think it will change everything. I think it will revolutionize every field, including my field of neuroscience, when we discover life on other planets, because whatever the life form is, it will challenge something completely new about evolution, and about DNA.

The whole idea behind the Starshot is  awesome. It restores hope that in our lifetime we’ll get to at least see another planet, see what’s going on there. It gives hope in a way that was sort of gone. If we find something alive there (however we define alive) it’s going revolutionize biology and throw us in such a tizzy. It’s going to be amazing.

How does science play a role in your day-to-day life? Does it affect the way that you interact with your kids?

Good questions! I would say that I really encourage my son to do hypothesis testing, but I don't use the word hypothesis because it's a big heavy word. But if he says "Oh how does this work?" I get him to try out different things to figure it out, to say to himself: "If I believe it works this way, what would I try and how would I know?" I think that's a pretty useful approach to getting to know the world around us instead of a parent just telling you how it works.

Does he go all in for that? Does he engage that way?

Yeah, he totally does. There's lots of stuff that he doesn't engage with, it's hard to get him to do what you want for most things but when it comes to hypothesis testing, it's really enjoyable for him.

How aware is he that you study the brain?

He's totally registered that I study the brain. He doesn't ask that many questions about it, but it always comes up in conversation. If you ask him what he wants to be when he grows up, he'll say "a neuroscientist" like mommy and daddy. It's part of his vocabulary.

SPONSOR CONTENT
<
This story was created for , which paid for its creation and inclusion on this site. For more on Smithsonian.com’s editorial guidelines click here.