When Natalie Batalha was growing up in Northern California, she told her mother she wanted to be a philosopher—“looking for meaning in life,” she says today, with an ironic smile. At the University of California, Berkeley, she started out as a business major, but switched to physics after learning that natural phenomena can be modeled mathematically. “I was moved that the universe could be described in numbers,” she recalls.

She got a taste of scientific discovery during an internship at the Wyoming Infrared Observatory, where she was tasked with making sense of puzzling data on a young star with a rotating disk of gas and dust. In finding the solution, she later recalled, “I got to see something that no other human had ever seen before.”

Batalha and her husband, Celso Batalha, are both astrophysicists. They raised their four children to appreciate what she calls “the most important part of science, a sense of wonder and of the beauty of nature.” It worked well enough that their oldest daughter, Natasha, earned her doctorate in astrophysics and astrobiology in June.

Yet, until recently, Batalha says, she was still reluctant to think of herself as a scientist: Science finds facts, but do the facts add up to meaning?

Her ambivalence didn’t prevent her from becoming the project scientist of NASA’s Kepler mission. Since 2009, Kepler has been looking for planets outside our solar system where life might flourish. Batalha was the one who refined the point in the sky—tucked under the wing of Cygnus, the swan—where the spacecraft would aim as it trailed the Earth. She selected the stars it would observe: 200,000 of them over the course of four years.

No planet-finding mission of this scale had ever been attempted. Previous efforts had used a method called Doppler spectroscopy, which detected planets by seeking gravitational pulls on their stars. But this method was best suited to finding gas giants like Jupiter. To find rocky Earth-size planets, Kepler looks for the tiny variations in observable light that happen when a planet crosses in front of its star.

Under Batalha’s direction, scientists used computer programs to tease out evidence from torrents of Kepler observational data. Once leading candidates emerged, scientists were able to cross-check them through other measurements. Batalha headed up the analysis that confirmed Kepler 10b as the first rocky planet detected outside the solar system, and helped confirm the existence of more than 2,300 other exoplanets, including about 30 that are comparable in size to Earth and orbit in “habitable zones” around their suns. 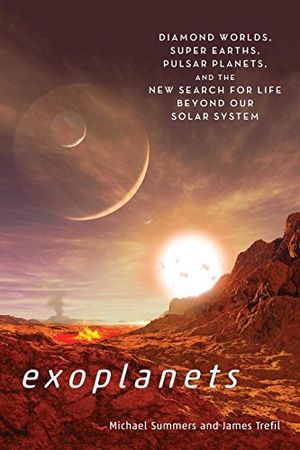 In Exoplanets, astronomer Michael Summers and physicist James Trefil explore these remarkable recent discoveries: planets revolving around pulsars, planets made of diamond, planets that are mostly water, and numerous rogue planets wandering through the emptiness of space.

All of this involved working with hundreds of Kepler colleagues—“Science is hard,” Batalha says, “people are harder.” The stellar astrophysicist Gibor Basri calls Batalha “a crucial find for the Kepler mission, given her scientific acumen, great organizational skills and ability to work with team members in a variety of areas.”

Kepler has paved the way for NASA’s next planet-finding mission, the Transiting Exoplanet Survey Satellite, or TESS, scheduled to launch in 2018. TESS will spend two years studying 200,000 relatively nearby stars. If it detects Earth-like planets close to home, the James Webb Space Telescope, scheduled to launch in spring 2019, will then analyze their atmospheres, looking for what Batalha calls the “chemical fingerprints” of life, such as oxygen and methane.

Still, Batalha says she didn’t fully grasp the larger meaning of her work until one evening when she was taking her customary sunset run, on a path that climbs the tawny foothills around her home, in Danville, California. Out on the trail, she’d often thought about how our awareness of the stars and their apparent movements transform the sky from a static dome into a dynamic system we’re part of. “No longer mere observers of the void, we become pilgrims of the Milky Way,” she says. Instead of feeling daunted by the complexity above her, she’d think to herself, “We are that complexity, the universe becoming self-aware. This is how I see the night sky when I’m running.” After working on the Kepler mission, Batalha realized she wasn’t even seeing the stars as stars anymore. She was seeing them as the centers of individual solar systems—“other possible cradles of life” where other consciousness might thrive.

Although Batalha is indisputably a scientist, I think she’s right to see herself as being something else as well. She’s an explorer. That word may conjure up images of rugged heroes setting out toward watery horizons—from the 15th-century Chinese explorer Zheng He, coasting India in a mighty fleet of treasure-laden junks, to Prince Henry the Navigator opening up trade routes to Asia, to Apollo astronauts gathering Moon dust more precious than diamonds. But today, worlds beyond imagining are being bagged by this philosopher-scientist casting long shadows as she runs toward rising planets.

Timothy Archibald is a San Francisco-based photographer who does both editorial and advertising work.

Timothy Ferris is a former journalist and author of several books, including Seeing in the Dark, The Whole Shebang, and Coming of Age in the Milky Way.