InSight is barreling in for a landing on Mars. The spacecraft will make its approach and landing via a tried and true method, but even though NASA has pulled this stunt before, dozens of things need to go exactly right during entry, descent, and landing (EDL) for InSight to arrive safely on the surface of the Red Planet.

At 2:47 p.m. EST on Monday, November 26, the InSight lander will hit the top of the Martian atmosphere, about 125 kilometers (70 miles) above the surface, traveling at 5.5 kilometers per second (12,000 mph). The craft’s ablative silica heat shield will rise to a temperature of more than 1,500 degrees Celsius—hot enough to melt steel. About three and a half minutes after atmospheric entry, the spacecraft will still be hurtling toward the ground at supersonic speeds. A parachute will deploy to decelerate as much as possible, the heat shield will jettison, and the spacecraft will start looking for the ground with a radar. About six minutes after hitting the atmosphere, the lander will separate from its back shell—still traveling about 180 mph—and fire its retro rockets to bring it the rest of the way home, touching down roughly a minute later.

If everything goes right—while engineers monitor control screens during the “seven minutes of terror,” unable to steer the distant craft in real time—InSight will come to rest in Elysium Planitia on the Monday after Thanksgiving and prepare to begin studying the seismology and internal heat of Mars. NASA can take comfort in the fact that such landings have succeeded in the past, but when you are attempting to land a craft millions of miles away, it’s impossible to prepare for every eventuality.

Whenever a Mars landing approaches, space fans get an earful of statistics. Before Curiosity’s landing, “more than half of all Mars missions have failed.” Before Europe’s ExoMars’ launch, “more missions have failed than not: 28 flops compared to 19 successes." After the ExoMars orbiter succeeded, but its lander did not (at least, not entirely): “Of the about a dozen robotic lander and rover missions launched to Mars, only seven have succeeded.”

The statistics are dramatic, but the story they tell is a little dated. There was a spectacular run of failures in the latter part of the 20th century—Mars 96, Mars Observer, Mars Climate Orbiter and Mars Polar Lander’s losses still sting. But while Russia has never achieved a complete success at Mars, NASA, the European Space Agency (ESA) and the Indian Space Research Organisation (ISRO) have all pretty much nailed orbital insertions at Mars since Y2K. China, India and Japan have their second Mars-bound missions in the works, and the United Arab Emirates is planning their first, not to mention the ambitions of several private entities.

Mars orbit insertions have become relatively routine in the 21st century, but Mars landings are still some of the most difficult deep-space missions ever attempted. ESA’s two successful orbiters both included tiny landers that were never heard from after touchdown, though ExoMars’ Schiaparelli lander returned data nearly all the way to the surface.

Three things make a Mars landing much more difficult than a moon landing—or an Earth landing, for that matter. First, unlike the moon, Mars is too far away for any ground-bound human to be in the loop during a landing attempt. The time it takes for a signal to travel from Mars to Earth and back is never less than nine minutes and is usually much longer, so by the time we can hear and respond to a signal that our spacecraft has hit the top of the atmosphere, the end result, one way or another, has already occurred.

The second problem is Mars’ atmosphere. There is both too much and too little. On Earth, when astronauts and sample capsules return from space, we can protect spacecraft behind heat shields and use the friction of atmospheric entry to slow the hypersonic craft to subsonic speeds. Once the flamey part is over, we can simply pop out a parachute to further reduce the velocity and drift to a gentle (or, at least, survivable) touchdown on land or water.

Mars’ atmosphere is thick enough to generate a fiery entry, requiring a heat shield, but it’s too thin for a parachute alone to slow an entering spacecraft to a safe landing speed. When Curiosity hit the top of Mars’ atmosphere in 2012, it was traveling at 5.8 kilometers per second (13,000 mph). When the heat shield had done all it could do, the spacecraft was still hurtling toward the ground at 400 meters per second (895 mph). Curiosity’s parachute could, and did, slow it down, but only to 80 meters per second (179 mph). Hitting the ground at that speed is not survivable, even for a robot.

On an airless world like the moon, heat shields are not required and parachutes do you no good. But fear not, we’ve had the technology for lunar landings since the 1960s: take some rockets and point them downward, canceling out the craft’s velocity.

The atmosphere makes things a little trickier on Mars, though. With moving air as an additional factor, unpredictable winds can add an equally unpredictable horizontal velocity to a descending spacecraft. For this reason, landing regions on Mars are required to have low regional slopes. High horizontal winds plus high slopes could put a lander much farther from, or closer to, the ground than it expects—and either situation could spell disaster.

So a Mars lander needs three technologies to reach the surface: a heat shield, a supersonically deployable parachute and retrorockets. The Viking missions to Mars in the mid-1970s prepared by test-launching parachutes on suborbital rockets to verify that they could inflate without shredding at faster-than-sound speeds. All successful Mars landings since then (all of them NASA’s) have relied on parachutes with Viking legacy. Recently, NASA has worked on a new effort to develop deceleration technologies able to land spacecraft heavier than the Viking probes—an effort that was not, initially, successful, resulting in catastrophically shredded parachutes. (More recent tests have worked better.)

Keeping all of this in mind, what do we know about what went wrong for recently failed Mars landers? For two of them—Mars Polar Lander and Beagle 2—we can only speculate. The spacecraft had no ability to transmit real-time telemetry data as they descended. The Mars Polar Lander failure taught NASA an important lesson: If we are to learn anything from our failures, we have to collect as much data as we can up to the point of failure. Ever since the Mars Polar Lander crashed into the surface at the end of 1999, every Mars lander except ESA’s Beagle 2 has transmitted data to an orbiter that recorded raw radio signals for future analysis in the event of failure.

These days, there are many orbiters at Mars, so we can do even better than that. There’s always one orbiter listening to and recording every last bit of radio signal from a lander, just in case of disaster. And there’s usually a secondary orbiter that doesn’t just listen to the signal, but decodes it and relays the information to Earth as fast as the slow travel of light will allow. This “bent-pipe” data transmission has given us the adrenaline-laced, real-time picture of Mars landing attempts.

When InSight lands, it will fall to the Mars Reconnaissance Orbiter to record telemetry for future dissection if the attempt fails. To get real-time data of the landing, however, InSight has brought along two little spacefaring companions: the MarCO CubeSats, each only about three feet long. The Mars Cube One spacecraft are the first-ever interplanetary CubeSats. If the craft succeed, the world will get its real-time reports on InSight’s landing, and the little space robots will pave the way for future, tinier, cheaper trips to Mars.

But for now, all eyes are on InSight. NASA has successfully landed on Mars seven times, and before the month is out, the space agency is going to try to make it eight.

Emily Lakdawalla is a planetary evangelist at The Planetary Society and the editor of the society’s quarterly publication, The Planetary Report. Her new book is The Design and Engineering of Curiosity: How the Mars Rover Performs Its Job. 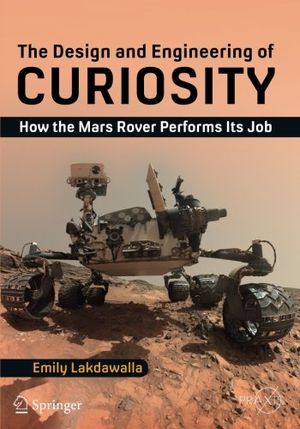 The Design and Engineering of Curiosity: How the Mars Rover Performs Its Job

This book describes the most complex machine ever sent to another planet: Curiosity. It is a one-ton robot with two brains, seventeen cameras, six wheels, nuclear power, and a laser beam on its head. No one human understands how all of its systems and instruments work. This essential reference to the Curiosity mission explains the engineering behind every system on the rover, from its rocket-powered jetpack to its radioisotope thermoelectric generator to its fiendishly complex sample handling system.