Inside the Growing Movement to Share Science Through Quilting 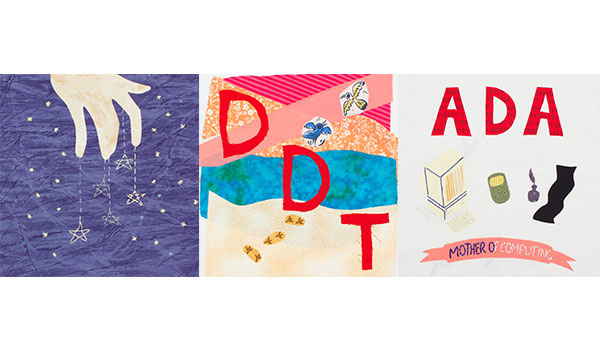 Earth scientist Laura Guertin had just returned from Louisiana when her journey with science quilting began. Her seatmate on the flight home had explained to her how discarded Christmas trees were used in the Louisiana bayou to help reduce wave energy and shoreline erosion. Guertin was fascinated by this ingenious example of reusing garbage to help an ecosystem. Then, while walking through her dining room, the Penn State Brandywine professor saw her quilting materials spread out next to her sewing machine. And it hit her—she could combine her passion for quilting with her talent for explaining science to the public.

Inspired, she started sketching out a design to illustrate the story she heard on the plane. “There’s no pattern that exists for [telling] a story about Christmas trees in Louisiana,” Guertin says. Her quilt, “Christmas trees for coastal optimism in Louisiana” depicts a bayou scene. She created the quilt to be viewed from top to bottom, with horizontal sections—separated by gray fabric strips—depicting sequential moments in time. As the viewer moves down each section of the quilt, less and less land is represented as water erodes the coast. At the bottom of the quilt, Guertin sewed patches of Christmas trees near the coast and decreased the loss of land fabric to represent a reduced rate of erosion.

The wall hanging she created became the first of nine quilts in Guertin’s “Stitching Hope for the Louisiana Coast” collection. One depicts the story of invasive apple snails and another focuses on marsh restoration. “Each quilt is a different story about adaptation and resilience—that theme of coastal optimism,” she says.

Guertin’s collection of coastal quilts will be just some of those on display at the American Geophysical Union’s meeting this year, which will be held virtually and in-person in New Orleans in December. In an effort to embrace STEAM—science, technology, engineering, art and mathematics—Guertin and collaborator Betsy Wilkening are leading the charge to encourage individuals to make quilts that communicate science. They have set up a hashtag, #QuiltYourScience2021, for artists to share their designs on Twitter and Instagram, as well as a Slack community.

Anyone can share a science quilt to display at the American Geophysical Union Meeting, and #QuiltYourScience2021 is open to all ages and skill levels. Each quilt will focus on Earth and space sciences, broadly, and be no larger than 24 by 24 inches. Science quilters are already connecting with one another ahead of the exhibition, finding inspiration and sharing tips on Instagram and Twitter with two other hashtags—#SciQuilt21 and #QuiltYourScience.

Karen Vaughan, a soil scientist and University of Wyoming professor who creates paints with dirt, says quilting is another artform that can help individuals embrace science. “By integrating science and art, we’re creating connection through an emotional response to something that’s often seen as factual and concrete,’ she says. “Art opens the door to more—it’s an invitation to care, relate and act upon the results of scientific inquiry.”

Guertin notes quilts have a long history of communicating messages across generations. For example, many homesteader quilts communicated an array of messages, from designs indicating faith to patches representing friends and families back home. Guertin believes quilting is a powerful medium to help engage individuals with science, since the art form produces familiar, comforting handmade objects. She blogs about her science quilting at Journeys of Dr. G. “I want to make the quilts accessible to people in terms of bringing in new audiences to engage and talk about science that maybe we haven’t been able to attract before,” Guertin says. “It’s been pretty effective.”

She thinks the dialogue the quilts lead to is important. “These science conversations around these science quilts, those discussions can lead to action,” Guertin says. “And then the action is what’s going to benefit planet Earth in the end.”

Guertin begins each quilt with a story she wants to tell, using a variety of fabrics printed with themes like ocean waves, fish, birds, compasses and even sea glass. For her invasive apple snail quilt, she created a design depicting nine jars, and used a different fabric within each jar—showing everything from snails to apples to birds—to share how flying predators are helping to control the nuisance gastropods. She says such quilts tend to attract attention.

“People immediately see this blanket hanging there,” Guertin says. “Blankets are not threatening, no one is scared of a blanket. Everyone’s got a favorite blanket story or everyone’s got that blanket on the end of their bed that their grandmother made, so the idea of a blanket seems to bring a lot of people in.”

Sometimes Guertin will engage admirers in conversation, and they will often take photos to send to relatives who quilt, passing on the story yet again. “There’s the novelty of having a quilt telling a story about science, and it’s getting shared, which is exactly what we want as scientists and what the residents of southern Louisiana want.”

Guertin displays her quilts at science centers, schools and educational events around Philadelphia. But during the pandemic, she found a different place where she could display her quilts and educate others: her front door. “With the shut down of the schools and our public libraries, so many families were just starting to walk around the neighborhood,” she says, before later adding, “I was like ‘what an opportunity.’”

Her front door is close to the sidewalk, so she began placing science facts on her door in March 2020, covering topics from earthquakes to oceans. Then she began hanging quilts, placing information about each pattern below the creation. The display offered an accessible enrichment activity for families. “The neighbors have called the front door of our house their school field trip site,” she says.

She recalls seeing a woman with three kids reading one of the educational signs. Each child selected their favorite science fact. Once, a neighbor left a Post-it saying how much they enjoyed learning from the displays. “It’s a way to teach science I never thought I would ever do,” Guertin says. This year, she is using her front door to display a miniature quilt each month related to Project Drawdown—an organization aiming to reach a place where greenhouse gas levels in the atmosphere start declining. Her Project Drawdown quilts tackle topics such as food, electricity and agriculture.

Courtney Gallaher, a geography and women’s studies professor at Northern Illinois University, is also using quilts to educate. In 2017, she taught a Women in Science course which included a project where students worked together to create a quilt focusing on female scientists.

Forty students worked to create 20 quilt squares, depicting well-known scientists like Rachel Carson and Jane Goodall, along with lesser-known women such as molecular geneticist Leena Peltonen-Palotie and X-ray crystallographer Rosalind Franklin. “A lot of these women scientists—even the ones put on the quilt—their ability to participate in the scientific process was deeply hindered by their gender,” Gallaher says.

The students sought out ways to depict each woman’s scientific work abstractly and creatively, then took a crash course in sewing, designing squares, cutting out fabric and assembling each piece. Then Laura McDowell-Hopper, who was curating The Human Rights Quilt Project at the NIU Pick Museum of Anthropology, combined each piece into a queen-sized quilt. The process was depicted in a short documentary by Randy Caspersen. “[The students] said it just allowed them to be creative and learn in a way that they don’t usually get to do in college," Gallaher says. "I expected that they’d like it, but I was a little blown away by how much they liked it."

Some students enjoyed quilting so much they purchased supplies and worked on their own projects after the class ended. Gallaher says she is contacted a couple times a year by professors at other universities who are eager to bring quilting into their science classrooms.

Not every science quilter is a researcher. Ann Baldwin May is an avid quilter who has made hundreds of quilts over the years—she stopped counting at 300. She focused on bed quilts before transitioning to art quilts about a decade ago. She was intrigued when she heard about a University of Santa Cruz project pairing artists with scientists. She was matched with a physics PhD candidate who was studying dark matter, so she began examining images of subatomic particles smashing together, noticing the vibrant colors and patterns, and the space in between.

"What I saw when I looked at the pictures was so many of them look like fibers and threads... I was very surprised—I was blown away by that." She selected several images that appealed to her and worked to reproduce renditions of them with cloth and decorative threads.

May created several physics-inspired quilts, including the Blue Collider Event Display, which is now part of a traveling quilt show. She says she loves playing with fabrics and colors. "That’s what motivates me—how the items go together and make something of interest," she says.

"Quilting is amazing as an artform," Gallaher says, before adding that she loves that such a creative process is being brought into STEM. “There's more and more research and just general understanding that art plays a really important role in helping people’s brains understand science and math."