Inside the Experiment to Create Mars on Earth

A hostile landscape. Cramped quarters. Dehydrated food. A photographer takes part in an attempt to live on another planet 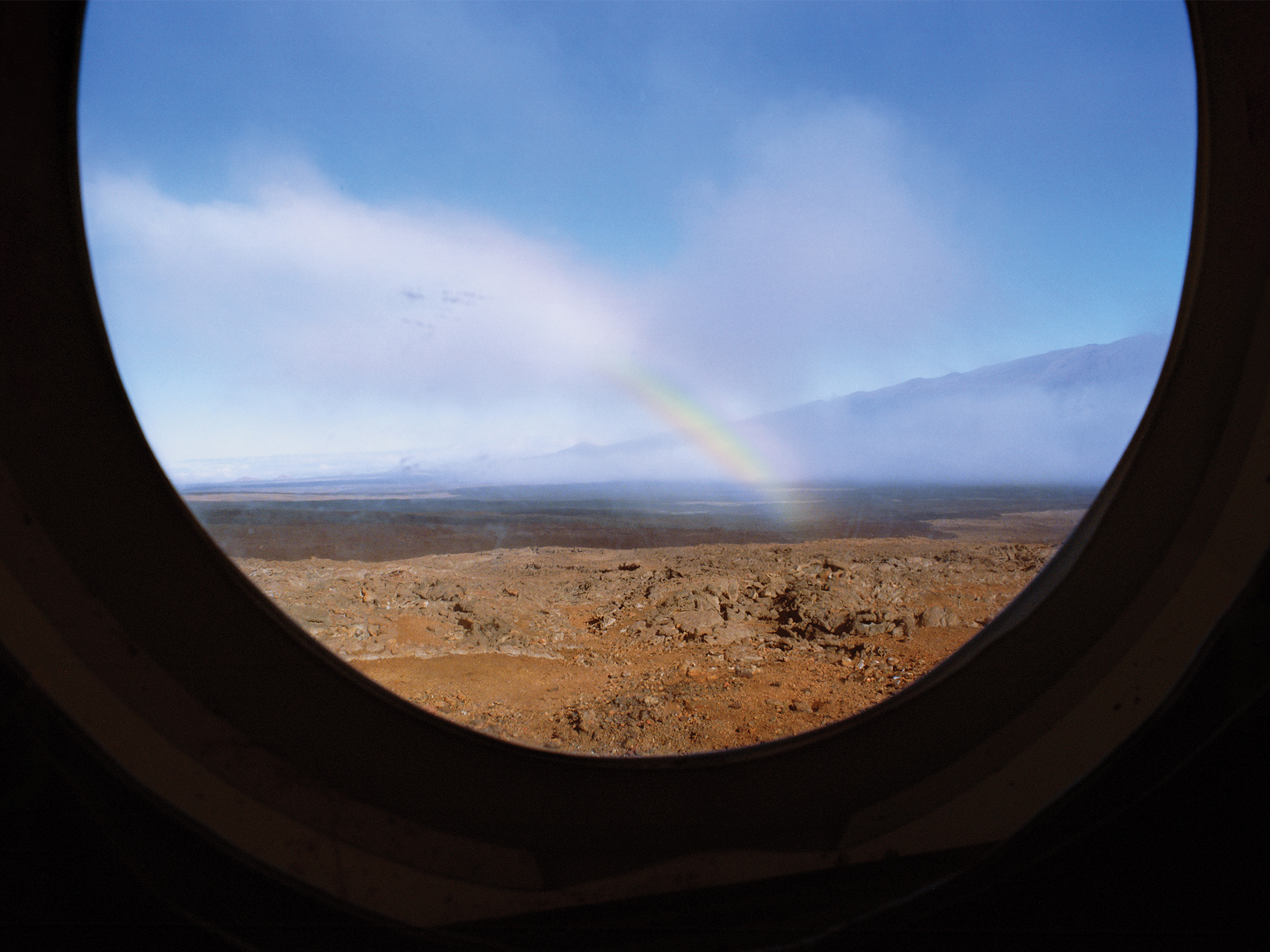 A rainbow appears after a storm on the faux-Martian habitat.

When Cassandra Klos was growing up in rural New Hampshire, it was easy to see the stars. She traced the constellations with her finger and imagined how it would feel to travel among them. As a college art student, she launched a photo project about Betty and Barney Hill, a New Hampshire couple who claimed to have been abducted by aliens.

Then Klos went on her first mission to Mars.

To be clear, no earthling has actually set foot on the red planet. NASA is hoping to send a crew there in the 2030s, as is China, and the private company SpaceX is working to establish a permanent Martian presence with starships ferrying humans back and forth to Earth. “We don’t want to be one of those single-planet species,” SpaceX founder Elon Musk said in April, outlining the company’s ambitions. “We want to be a multi-planet species.”

First, though, there’s some figuring out to do. Designing the right spacecraft and living spaces is part of the challenge. There are also prosaic, but important, questions. How will people shower with a limited supply of water? What will it take to grow fresh greens to supplement the steady diet of dehydrated food? And with civilians from different backgrounds living together in close quarters, will Martian habitats end up resembling the set of Jean-Paul Sartre’s play No Exit, where hell is other people?

The two-week mission Klos joined in 2015 was designed to explore those kinds of questions. It took place at the Mars Desert Research Station in Utah, four hours south of Salt Lake City, but everyone spoke and acted as though they were actually on Mars. A group of six people lived in a two-story cylindrical building. The commander, a former member of the Army National Guard, kept the participants on a strict schedule of fixing electrical systems, taking inventory, tidying up the facilities and sampling the soil. Everyone was assigned a special role: Klos’ was to prepare reports to share with the public. The health safety officer kept tabs on the crew’s well-being, and the engineer monitored levels of carbon dioxide and solar power.

Before stepping outside in a spacesuit, Klos and the others had to get permission from mission control back on “Earth” (actually a coordinator stationed in a nearby town). That person would send information about the winds and weather, and determine how long each person could stay outside the base. Sometimes dust storms rolled in, cutting off the solar power supply just as they would on Mars. Klos was allowed to bathe only once a week, using a couple of buckets of water. She was enchanted.

“This is not performance art,” says Klos. “These are real scientific endeavors. Sometimes people make the critique that we’re role-playing too much. But the goal is to really live the way people are going to live on Mars so scientists can figure out how to make it work when we get there.”

There are about a dozen such habitats around the globe, hosting simulations that run anywhere from two weeks to a full year. One of these is run by NASA’s Human Research Program at the Johnson Space Center in Houston. But other facilities are funded by private organizations. The Mars Society, established by Brooklyn-born aerospace engineer Robert Zubrin, operates the habitat in Utah, where Klos returned for another mission in 2017, and another in the Canadian Arctic. Klos also took part in a mission at the Hawaii Space Exploration Analog and Simulation, or HI-SEAS. The facility is run by the International MoonBase Alliance, a group founded by the Dutch entrepreneur Henk Rogers.

HI-SEAS is located on Hawaii’s big island at 8,200 feet above sea level, on top of the active volcano Mauna Loa. NASA’s Goddard Space Flight Center is collaborating with the facility to gather information about volcanic caves and the microbes that live in those Mars-like conditions. HI-SEAS is also studying the limitations of doing that kind of work while wearing heavy spacesuits. It’s hard enough for astronauts to hold a screwdriver in a gloved hand while repairing the International Space Station, but if people are going to be clambering on Martian rocks looking for microbes, they’ll need the right gear.

The missions are open to people who have no background in science, engineering or astronaut training. After all, the goal is to send ordinary folks into space, so it’s worth finding out whether ordinary folks can coexist in Mars-like conditions here on Earth. Each two-story habitat at a simulation facility has usable floor space of only about 1,200 square feet—the size of two small apartments stacked on top of each other—which isn’t much room for six people who can’t just breeze out for a walk around the block.

To get a spot on a Mars or Moon simulation, you have to propose a project that the leaders believe is useful. One recent HI-SEAS participant focused on 3-D printing, looking at ways to create bricks out of volcanic rock. Another studied hydrogen fuel cells. Yet another tried out different methods for growing hydroponic lettuce. Many projects focus on psychological research, looking at how various foods, exercises and smells influence people’s moods while they’re crammed together in a pressurized capsule.

Preparations for Mars may prove to have benefits for life on Earth. Earlier research for space travel paved the way for medical advances such as magnetic resonance imaging (MRI). The data we’re gathering now about surviving on solar power, conserving water and growing plants in arid conditions could be useful here at home as our climate changes.

The director of HI-SEAS, the 32-year-old astrobiologist Michaela Musilova, says she makes an effort to assemble diverse crews, using the internet to recruit teachers, journalists and artists like Klos. On a mission Musilova led in the fall of 2020, she ended up with crew members who supported opposing candidates in the November presidential election. “That made for very interesting dynamics,” she says. But Musilova says her teams are most innovative when their members come from different backgrounds. The range of perspectives is great for problem-solving, and the variety of personal stories can help combat boredom. And people who are eager to spend time on Mars, simulated or otherwise, tend to have certain things in common, including a willingness to live with strangers in close quarters and an enthusiasm for future space explorations.

“We all have our quirks,” Musilova says. “We’re all going to make mistakes and annoy other people. But when someone is having a bad day, we go out of our way to cheer them up. When someone is being a pain in the ass, we’re able to have some empathy.” If living together on Mars can make us into better versions of ourselves, that might be the greatest breakthrough of all.

Cassandra Klos is a fine art photographer who from 2015 to 2017 was the artist-in-residence at the Mars Desert Research Station in Hanksville, Utah.