What makes us want to grow a lily in a pot? It’s a question at the center of entomologist Stephen Buchmann’s latest book, The Reason for Flowers: Their History, Culture, Biology and How They Change Our Lives. People have been obsessed with flowers since ancient times, Buchmann notes. A painted casket found in King Tutankhamun’s tomb is decorated with a bouquet including cornflowers and lily petals, and Chinese gardeners have grown lotus, peonies, magnolias and tiger lilies since at least 1,000 B.C.

Today, certain flowers have enormous cultural value: In Grasse, France, the distilled oils of jasmine plants can fetch $12,000 a pound, Buchmann writes in a chapter about perfume. He also devotes a chapter to flowers in literature. But his specialty is the science—Buchmann’s interest in flowers began during his childhood in California, when he would chase bees through wild meadows, and his research focuses on the weird and wonderful relationships flowers have forged with their animal pollinators.

I spoke to Buchmann about why we all love flowers and what mysteries these floral wonders still hold. (The following has been edited for length.)

If we visited your home in Arizona, what types of flowers would we find?

I have cut flowers and potted plants year-round. My favorites are the multicolored Chilean Alstroemeria, because their blooms last so long, along with various modern and heirloom roses and the glorious white-flowered Asian moth orchids. My all-time favorite flowers are the orchids, in part because of their incredible diversity of forms, scents and colors. I am especially intrigued by neotropical orchids like Stanhopea and Gongora. These produce spicy scents and no rewards of edible pollen or nectar. Visiting male orchid bees scrape up the floral scents using special hairs on their front legs. After spending weeks or months harvesting orchid and other scents, the bees store the scents in their inflated hind legs. Eventually, they use these purloined floral scents as their own sexual attractants.

Which flowers are underappreciated?

Skunk cabbage. This lowly flower from the eastern United States uses its own internal heat to melt its way up through the snow, and the same heat production volatizes its carrion-like smell into the air to attract its fly pollinators. It’s an amazing example of floral adaptions in action. Many flowers like the Voodoo lily and the starfish flower from Africa are living biochemical factories that produce the same nitrogenous chemicals found when vertebrate bodies decompose. Carrion flowers often mimic the color, scent and even texture of dead animals, corpses ripe for the egg-laying activities of various filth flies.

Is there a rare or exotic flower you’d most like to see in your lifetime?

The giant mottled and red Rafflesia arnoldii had been on my bucket list for many years until I saw it firsthand a few years ago in the rainforests of Sabah, Malaysia, on the island of Borneo. I’d also relish the opportunity to see the giant corpse flower Amorphophallus titanum in the wilds of Indonesia. A. titanum is a contender for the worlds’ largest flower, another one of the carrion flowers whose heat and intense death-like stench attracts its fly pollinators.

Who writes about flowers most poetically?

Alfred Tennyson, Emily Dickinson, Ezra Pound, Louise Gluck, Sylvia Plath, Ted Hughes. A favorite is the work of Walt Whitman, who gave us wonderful imagery of garden lilacs in his poem “When Lilacs Last in the Dooryard Bloom’d,” a poem about the death of Abraham Lincoln. And since I grew up in the ’60s and ’70s, immersed in the southern California rock scene, another favorite are the dead flowers penned in song lyrics by Mick Jagger and Keith Richards on their Sticky Fingers album.

Do you prefer the flowers of Van Gogh or O’Keeffe?

Easy. I’ve always adored the powerful but simplified lines and folds [and] the macroscopic views of flowers by the late artist Georgia O’Keeffe. I’m attracted by the simplicity and power, and perhaps, like so many, drawn to their subliminal sexual imagery.

What destination in the world has the best blooms?

For wildflowers growing outdoors, the Sonoran Desert around my home in Tucson. Every year we have the dependable palo verde trees bursting into brilliant yellow, but every 10 or 20 years the desert puts on spectacular wildflower displays, including Arizona poppies, owl’s clover, lupines and globe mallows, among others.

What is the most fascinating flower discovery in the past decade?

It has been found that flowers have a negative charge that may influence pollinator visits. Every object that flies through the air, whether it is a baseball, a jumbo jet or a humble bumblebee, acquires a strong positive electric charge. A honeybee might be carrying a charge of several hundred volts. When a positively charged bee lands on a negative flower, pollen grains can actually jump an air gap and attach to the stigma [the part of a flower where pollen germinates]. These passive electrostatic charges aid the natural pollen-holding branched hairs on the bodies of most bees. Bees may even be able to “label” flowers they just visited with these charges and not revisit empty flowers in the future. 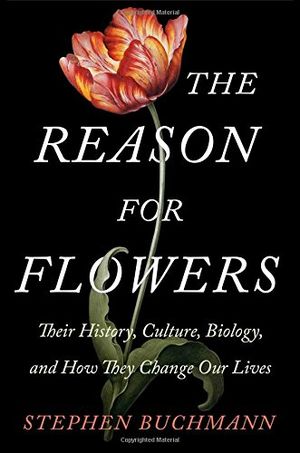 The Reason for Flowers: Their History, Culture, Biology, and How They Change Our Lives

The Reason for Flowers: Their History, Culture, Biology, and How They Change Our Lives [Stephen Buchmann] on Amazon.com. *FREE* shipping on qualifying offers. Cultural history at its best-the engaging, lively, and definitive story of the beauty, sexuality, ecology, myths

What’s the most unusual adaptation for attracting a pollinator?

About 8 percent of the world’s flowers have pored anthers, which is the only way for pollen to leave the flower. Certain bees, like bumblebees and carpenter bees, literally turn themselves into living tuning forks—their powerful thoracic muscles deliver sonic blasts to the flower, which ignite a maelstrom of pollen grains that come flying out of the anther pores, striking the bees and allowing them to efficiently collect the pollen grains as food.

Another most unusual adaptation occurs in some tropical and desert plants. Instead of producing typical pollen and nectar as floral rewards offered to pollinators, these “oil flowers,” like Barbados cherry or range ratany, have blisters on their undersides. Bees in the genus Centris rupture the blisters with special squeegee hairs on their front legs and transport these energy-rich floral oils back to their nests. The oils are mixed with pollen as larval food.

What botanical puzzle would you most like to answer?

I’d like to know how bees are most attracted to flowers and the most important sensory cues used in recognizing flowers from a distance. We know very little about this subject, especially in nature, outside of the artificial-flower testing arrays used by many modern behaviorists. Bees have thousands of tiny ommatidia, which together make up their compound eyes. Their visual acuity is only about one-sixtieth that of our human eyes. A flying bee needs to be almost on top of a bloom, about a foot away, before it can make the bloom out, although “flicker fusion” (the ability to detect rapid changes across their visual field) allows bees to detect the highly saturated spots of floral colors while flying across a meadow. My fantasy would be to see the world as a bee does, to become a flying bee, but only for a few minutes, because of all the entomologists, birds, spiders and lizards lurking nearby.