Terry Gates had spent years, Hamlet-like, pondering over skulls when, one day, he had an epiphany. Of the dinosaurs he was studying—he’s a paleontologist at North Carolina State University—only the skulls of the largest ones had bumps, hornlets and extravagant crests. Suddenly it occurred to him that such head ornaments weren’t just a byproduct of being large but a reason for it—an idea that’s now shaking up the conventional wisdom about how dinosaurs grew to their terrific size.

In the first study of its kind, Gates and his co-workers cataloged 111 skulls of theropods, predatory dinosaurs like Tyrannosaurus rex, from museum collections and publications all over the world. Theropods ranged in size from smaller than a house cat to as much as 13,000 pounds, but Gates started with Coelophysis, a 60-pound dinosaur from the beginning of the theropod family tree with a smooth skull (“basically a triangle with teeth,” Gates says). The researchers found that 20 of the 22 biggest predatory dinosaurs had bony head ornaments, compared with just one of those under 80 pounds. Moreover, dinosaurs with such features evolved over time into larger animals rapidly: Among dinosaurs who eventually weighed at least a ton, those with head ornaments increased in body size 20 times faster than those without ornaments, packing on up to several hundred pounds every four million to six million years. That rate might sound slow, but it’s speedy in evolutionary terms. “Once you get crests, your body size just shoots up super fast,” says Gates.

What’s so great about a dinosaur hood ornament? Scientists have thought for years that horns and crests helped dinosaurs communicate and display dominance. But the new finding goes one step further, suggesting that the adornments played an important role in body size. Consider the bony ridges around T. rex’s eyes, which presumably were more pronounced in adults that had plenty to eat as youngsters. In the classic view of dinosaur evolution, T. rex increased in size over the generations because more bulk helped it survive and hunt. In Gates’ view, however, an impressive set of ridges would help it impress mates. If a T. rex was both big and impressive-looking, he’d have his pick of the mating pool, and size and ornamentation would more likely be passed down.

The new work adds to a growing body of evidence about the complex social lives of dinosaurs. Because we can’t observe them in action, Gates says, “we have to infer what we can’t see, like a picture partly hidden by a curtain. This shows us a new piece of what’s underneath.” 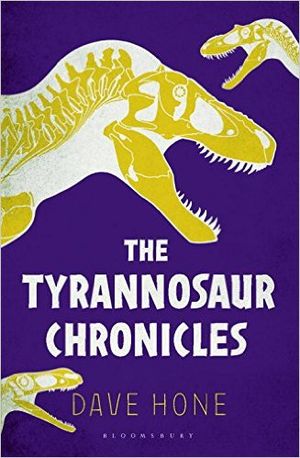