Justin Schmidt has been stung more than 1,000 times by nearly 100 different insect species. Some would call that madness. He calls it science.

Schmidt, an entomologist at the University of Arizona, is the author of a new book called The Sting of the Wild, which seeks to quantify every one of those stings and rank them on a scale of 1 to 4. At the low-end of the scale you have creatures like sweat bees and Southern fire ants. At the top, you meet beasts with names like the warrior wasp and the bullet ant.

But the numbers are just the beginning. For our amusement—or perhaps commiseration—Schmidt has provided a sentence or two about the quality of each sting. The bullhorn acacia ant, for instance, garners a respectable score of 2 on the Schmidt Sting Pain Index, a sensation he compares to having a staple fired into your cheek. Interestingly, Schmidt differentiates between stings of the same intensity as a sommelier would fine wines. The sting of the artistic wasp, also a 2, is described thusly, “Pure, then messy, then corrosive. Love and marriage followed by divorce.”

Entertaining as the index can be—entertaining enough to earn an Ig Nobel prize last year, an award that is widely celebrated, if not coveted—there’s so much else in this book about stinging insects that most people will find surprising.

For starters, did you know every insect you’ve ever been stung by was a female? That’s because male insects have no stingers.

Stingers evolved from a female reproductive organ called an ovipositor, which you can think of simply as an egg-laying tube. In some species, the males do possess hardened, thorn-like genitalia that they jab into attackers, but this is all a ruse. The difference is like that between a dull thumbtack and a hypodermic needle full of neurotoxin.

Another bit of biology may come as a comfort the next time yellow jackets descend upon your backyard barbecue.

“Insects see the world differently than we do,” says Schmidt. For them, sight and sound are far less important than smell.

Schmidt once performed an experiment with Africanized honeybees where he approached three large colonies while breathing in through his nose and exhaling through a long tube. This species, known colloquially as killer bees, is rumored to be fiercely territorial, unpredictable, and ultimately deadly, but Schmidt was able to walk right up to the nests, wave his arms about, clap his hands, and even gently poke a glove into the writhing mass of insects without triggering a My Girl-like response.

Everything changed though the minute he spit out the tube and huffed his breath at the hive from six to eight inches away.

“The bees just exploded,” says Schmidt. “Like someone set off a bomb in the middle of them.” 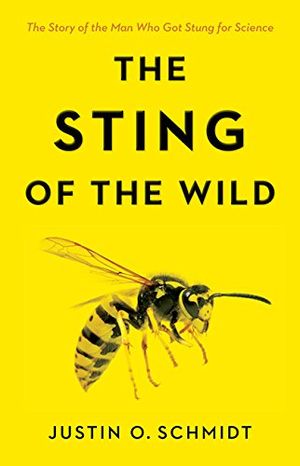 The Sting of the Wild

What about our breath gets Africanized honeybees, yellow jackets, and other social wasps so riled up? Hint: It’s not the garlic on your pizza.

Like all mammals, human breath contains carbon dioxide, as well as a cocktail of compounds including aldehydes, ketones, alcohols and esters. Over millions of years, the insects have learned that if they sense this combination of smells, it probably means a bear or honey badger is coming to wreck their home and devour their young. Can we really blame them for responding accordingly?

Obviously, humans can’t hold our breath indefinitely, and you’re unlikely to have a length of hose with you the next time you inadvertently stir up some bees. But Schmidt says nearly everyone can hold their breath for at least thirty seconds, during which time you should put your head down, resist the urge to flail, and calmly ghost out of Dodge.

By the way, killer bees only garner a 2 on the index. Though Schmidt does give the species a special accommodation of a 3 for one particular incident, a sting sustained to the tongue after a bee crawled inside his soda can. So reads the description: “For 10 minutes life is not worth living.”

This is far from the only time Schmidt has had a bee in his mouth. Aside from holding male bees between his lips to shock (and educate) schoolchildren, Schmidt has actually chomped down on more than few insects in his day.

In one instance, he wanted to know how a kingbird perched outside his office at the University of Arizona was gorging itself on a nearby colony of Africanized honeybees. Unlike African and Asian bee-eaters, which catch bees in their beaks and then bash them off a branch to remove the stingers, the kingbird was knocking back bee after bee like a pelican does fish.

After collecting 147 regurgitated pellets the kingbird left below its perch, Schmidt discovered the bird’s secret—every single one of carcasses was a male. The bird had learned to tell the difference between stingless males and stinging females in midflight. But Schmidt suspected the sting was only part of the equation, since other birds have learned how to deal with stingers.

To investigate, he captured a bunch of male and female bees from the same hive, then dissected them into three parts—the head, thorax, and abdomen. One by one, he popped them into his mouth and crunched down, using his own senses to approximate that of other predators.

“Our sense of taste is pretty much generic,” he explains. “In other words, what something tastes like to me is probably similar to what it’s going to taste like to a raccoon, opossum, skunk, shrew, or other non-specialist predators.”

The taste test results were striking. The heads of female bees tasted like “nasty, crunchy fingernail polish” and the abdomen echoed a sort of corrosive turpentine. Lacking large exocrine glands in the abdomen and strong pheromones in the head, the males, on the other hand, tasted a bit like custard. That kingbird knew what he was doing.

Other sense-based insights have been gained less voluntarily. For instance, did you know some yellow jacket species can spray their venom? Schmidt learned that while halfway up a tree, teetering over a cliff, trying to capture a nest in Costa Rica. He was wearing a head-net, which kept the yellow jackets from stinging his face, but did nothing to protect him from the streams of venom they shot through the mesh and directly at his eyes. That was a new one.

You might think after so much pain, the stings would start to feel the same, but Schimdt confirms that one species remains the holy grail of stinging insects. And that’s the bullet ant.

“In fact, if I made a 5 on the scale, it would be just the bullet ant and nothing else,” he says.

Initially, the sting of tarantula hawks and warrior wasps are just as bad, but it’s the staying power of the bullet ant’s wallop that pushes it beyond the rest. It’s a “pure, intense, brilliant pain” that comes in waves lasting up to 36 hours. The description from the Index says it all: “Like walking over flaming charcoal with a 3-inch nail embedded in your heel.”

Perhaps the weirdest thing you’ll learn while reading The Sting of the Wild though? After 200-some pages of venom, Schmidt kind of (sort of, almost) leaves you yearning for a good sting.

Jason Bittel serves up science for picky eaters on his website, BittelMeThis.com. He lives in Pittsburgh.