Guy Consolmangno, the Vatican’s Chief Astronomer, on Balancing Church With the Cosmos 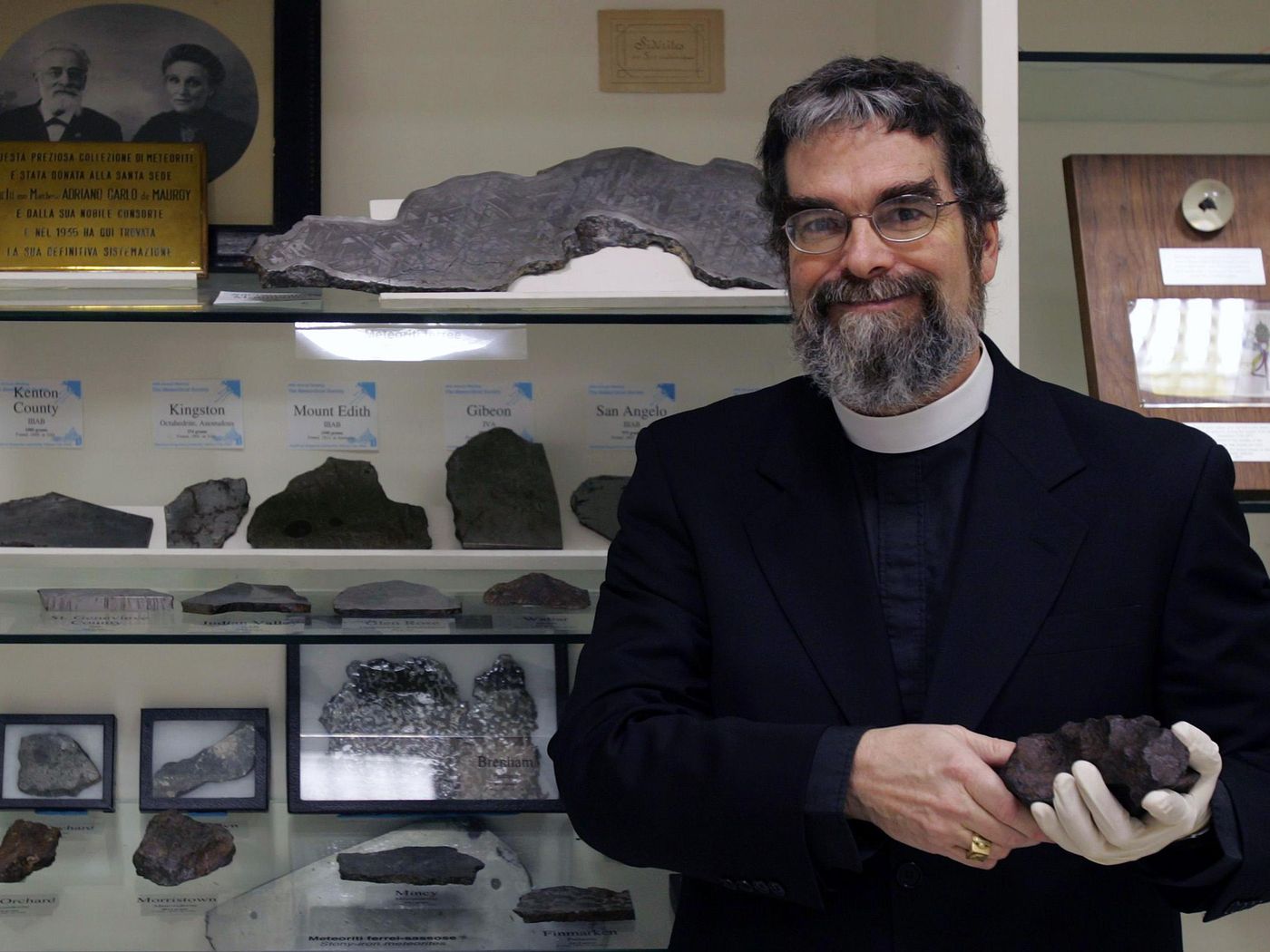 Brother Guy Consolmagno is the director of the Vatican Observatory and president of the Vatican Observatory Foundation. Raised in Detroit, Michigan, he studied Earth and Planetary Sciences at MIT for his bachelor’s and master’s degrees and at the University of Arizona for his doctorate. During a break in his studies he spent two years teaching astronomy in Narobi for the Peace Corps. Having attended a Jesuit high school, Consolmagno contemplated joining the church at several points in his career before joining the order in 1989. Two years later, he was called to serve at the Vatican Observatory where he has been ever since. Consolmagno’s research has always focused on the smallest bodies in our solar system and his work at the Vatican has allowed him to make significant contributions to this field over the past several decades. In 2014, he was awarded the Carl Sagan Medal by the American Astronomical Society for outstanding communication of planetary science to the public.

You can keep up with Consolmagno’s thoughts on work and life at the Vatican Observatory by reading his blog, following him on Twitter, and watching his TEDx talk.

I recently chatted with Brother Guy about his life in science and the church and what he’s learned from moving between the two.

How did you get interested in science? Where it something that was always there?

I'm a Baby Boomer kid. I was in kindergarten when Sputnik went up and I was a senior in high school when we landed on the Moon. We just grew up with all that. You have to have been there to know how intense the whole focus on science and school kids was. Added to that, I had a lot of support from my parents, especially, my dad. I had been very close with my dad all of my life. I'm the youngest of three and he's 98 and going strong. He was an early adapter in computers, so we chat over Skype or Facetime all the time.

What about planetary science? How did you choose that field?

I wound up spending my first year at Boston College as a history major and kind of wondering what I was going to do with my life. My best friend from high school was nearby at MIT, so I visited him every weekend and it was like night and day. MIT was an exciting place to be, more exciting than Boston College, so I transferred.

When it came time to choose a major, I saw earth and planetary science, so I checked that off thinking that was astronomy. It was only when I got there that I discovered that I made myself a geology major! But as soon as I learned about meteorites -- that there are rocks that fall from the sky that you could actually hold -- I was hooked. I never looked back.

How did you make the decision to join the Jesuit Order?

Part of my going to MIT was when I made the decision not to be a Jesuit priest at that point in my life. I wanted to leave Boston College, but joining the Jesuits as a way of getting out of the freshman dorms was not a good plan. I figured that one out early enough.

The planetary sciences Ph.D. program at the University of Arizona was just starting when I graduated MIT in ’75. I jumped in feet first and met some fabulous people. Had all sorts of ups and downs, and adventures, and back and forth, until I found myself 30 years old, finishing my fifth year as a post-doc, and feeling I was never going to get a job. That was when it stopped being fun. I would lay in bed and wonder, "Why am I doing astronomy, when people are starving in the world?" I decided it was time to walk away from it all and join the Peace Corps.

So, I went into the Peace Corps and the people in Kenya said, “You're an astronomer? Tell us about astronomy! Can we look through your telescope?" They'd look at the rings of Saturn and go, "Wow!" I'm going, "You know, of course they're going to go ‘Wow!’" Everybody goes, "Wow." That's what it means to be human.

It occurred to me that I had been thinking of the Jesuits back when I was 18 and, "Okay, I'm not going to be a priest. What am I going to do?" That kind of stuff, but I knew the Jesuits had brothers. If I was a brother, I could be a professor, and teach astronomy at a Jesuit school. I was all set to teach but instead of that happening, I got a letter from Rome saying, I'd been appointed to the Vatican Observatory.  They said to do whatever science I wanted and oh yeah, they had a collection of 1,000 meteorites that needs a curator.

How did the Vatican come to amass such an amazing collection of meteorites?

There was a French gentleman scientist in the 19th century, the Marquis de Mauroy. He was a great collector. He was also a great supporter of the Vatican and thought the Vatican should have a natural history museum to go along with our art museum, but they didn't have room for it. This was back in the turn of the century. He donated a few samples, which wound up at the observatory.

Then, in the 1930s, the concord up between the Vatican and Rome was signed, which gave them all this territory that we are at now -- Castel Gandolfo, about 30 miles outside of Rome, where the Pope's summer home is. The observatory moved out here because nobody wanted to live here in the winter, except the astronomers who said, "It's good and dark, yes!" The Marquis’s wife (by that time his widow) still had all his rocks. I think she wanted to get them out of the basement, so she donated the whole set of his meteorites and thousands of thousands of minerals.

How do your spend your time as a Vatican astronomer?

What we wind up doing mostly are long-term projects that, first of all, wouldn't get anyone tenure because they take too long. And second, won’t make anyone famous, because it's not cutting edge science. It's not out there with the latest multi-billion dollar instrument, but it's of enormous support to the rest of the field.

When you first moved to the Vatican Observatory, did get any funny looks or skepticism from your non-Jesuit colleagues?

Actually the most common reaction over and over again were people going, "You go to church? So do I. Don't tell anybody," because everybody thinks they're the only one. In fact, I could list some of the most prominent people in the field who have told me about their religion. I would say the proportion of people in my field who are church-goers matches the culture that they come from.

A friend of mine was at Cornell getting her doctorate when Carl Sagan was a student and she quotes Sagan as saying at one point, "An atheist is someone who knows more than I do." I interviewed lots of people, and just because you don't go to church doesn't mean you're not interested in, and fascinated by, and drawn towards the bigger questions. And just because you do go to church, doesn't mean that you've got it all settled, that you're not still questioning, and worrying, and, sort of, wondering, "Yeah, but ..." Because we're human beings and I wouldn't want it any other way.

What do you believe is a potential route forward to bring people from the far extremes of these two groups to actually engage in productive conversation?

I think it's not being afraid to talk about who you are with your friends. I'm not trying to proselytize, because that never works, but the place I encourage people to start is if you're a scientist or an engineer who goes to church, talk to the people at your church, so they don't have a false idea of what it is to be a scientist. So that their picture of a scientist is not just Neil Tyson, but also Joe Schwartz, who sits in the pew next to them every Sunday. It's that personal contact.

That also means that people in their churches, and people like me, need to be visible about the fact that we love this stuff we're doing and that this is real science. The Big Bang is not an atheist plot. The Big Bang was invented by a Catholic priest. I just like to remind people of that!

So many of the great heroes of science were deeply religious people. Of all faiths, not just one faith. James Clerk Maxwell was my hero and he was a very devout Anglican. Who knew? It was never talked about, because nobody ever needed to talk about it. The reason the Vatican has an observatory is to show the world that the church supports science.

We've also got a foundation that does a lot of outreach work. One program we've started is the Faith Astronomy Workshop. Priests, and deacons, and other parish educators to come out to Tucson for a week, get to meet astronomers and get behind the scenes. These people then go back to their home parishes and talk about it. The hope is that through these parishes, people will know astronomy is a wonderful thing. The Vatican supports it. No, we don't have to be anti-science to be good Christians. We hope that will have a multiplying effect. We'll see.

SPONSOR CONTENT
<
This story was created for , which paid for its creation and inclusion on this site. For more on Smithsonian.com’s editorial guidelines click here.