As California prepares for the 2018 wildfire season, it hasn’t yet recovered from the devastation of last year’s fires. 2017 featured five of the state’s most destructive fires of all time, including the catastrophic Thomas Fire in Ventura and Santa Barbara counties. Ravaging some 280,000 acres and destroying over 1,000 structures, it was the state’s largest fire on record, and took 40 days to put out. Two died in the actual blaze, but subsequent massive mudslides killed over a dozen more. Californians and others living in fire prone regions are facing a new reality, in part exacerbated by climate change.

“We have to find ways in which we can learn to live with fire," says Andrew C. Scott, a professor emeritus of geology at the Royal Holloway University of London who has studied fire fossils for four decades. “Understanding the history of fire makes you appreciate that it's a natural part of the earth system, which we can't exclude.” He spoke with Smithsonian.com about his upcoming book Burning Planet: The Story of Fire Through Time (out June 1 from Oxford University Press). 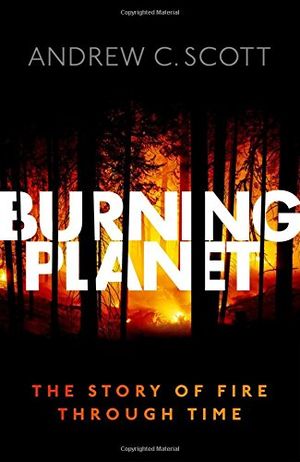 Burning Planet: The Story of Fire Through Time

Raging wildfires have devastated vast areas of California and Australia in recent years, and predictions are that we will see more of the same in coming years as a result of climate change. But this is nothing new. Since the dawn of life on land, large-scale fires have played their part in shaping life on Earth.

It was 40 years ago, when I started my PhD looking at fossil plants. I dissolved a rock up and found some fragments and charcoal, which were about 320 million years old. I found what was then the earliest known conifer, and so it sparked my thought about fire in ancient times. Over the last 40 years, looking at charcoal through geological time, I’ve tried to reconstruct ancient fire systems.

How do you investigate the history of fire?

When you have a wildfire going through vegetation there's always some residue left. The charcoal which is left is very inert and easily preserved. It also preserves beautifully the anatomy of the plants which were being burnt. Those pieces of charcoal get deposited in sediments, which then preserve as rocks through geological time. You pick up a piece of rock which may be 350 million years old, dissolve it, and you can not only then from the charcoal tell there has been a fire, but you might be able to then work out what had been burnt.

When did the earth start to burn?

The earliest known fire occurred about 420 million years ago—we know this from charcoal fragments found in Wales—but at that time there wasn’t a lot of vegetation, so the fire probably wasn’t extensive. Trees appeared 50 million years later, but the atmospheric oxygen levels then were low—fire needs at least 17 percent oxygen in the atmosphere. So it’s probably not until 350 million years ago that you got what we now call forest fires.

How have wildfires shaped the planet?

Fire has had a major effect on the atmosphere over time, using oxygen and producing large quantities of CO2. Fire has also stimulated evolution in some plants. Pines, for example, developed very thick barks probably during a period of high fire about 90 million years ago. Some plants actually use fire for their own reproductive strategy, like pine cones, which will only open when a fire has gone past. Fires destroy the plants on the ground, so when the cones open, the seeds are therefore [dropped] into a bare soil and can do really well. There are other plants such as the Fynbos, some of the proteaceae plants in South Africa, which actually only begin to flower and drop their seeds when they sense smoke from fire.

And the relationship between humans and fire?

One and a half million years ago, early humans may have been able to take advantage of natural fires, but it was probably much later that they were able to start fires, maybe as recently as 40,000 years ago. That was obviously evolutionarily significant. People gathered around fires for heat, food preparation, tool making, socializing.

What do we most misunderstand about fire?

Firstly [we assume] that all fires are bad. Secondly, that humans start all fires. Fires are part of many natural systems, started by lightning strikes. Unless there's a fuel to burn, then you are not going to get the fire, and that fuel has to be in the right condition—dry enough for it to burn. So you can blame humans, but actually sometimes they are only simply the ignition source and a fire's just waiting to happen.

There are many, many vegetation types, for which actually fire is a regular part of the natural system. One of our big problems is that as humans we like to build our houses more and more into wild land areas without thinking that fire be a major problem. We actually think that we can exclude it. In some cases, we might be able to, in certain types of vegetation. But in many parts of the world, in many places, we are building out into flammable vegetation. To think that we can exclude fire from the landscape is probably one of the biggest mistakes.

The second thing is that we are changing the nature of our vegetation. We are introducing plants from outside their natural habitat. In particular, for example, grasses are being spread across parts of the Western U.S., and these grasses have actually changed the nature of the fires that occur in some of these vegetational areas.

In your book you say that the 2002 Hayman fire in Colorado changed our understanding of modern wildfires. Can you elaborate?

The Hayman fire was important because, for the first time, we had a lot of satellite data and a lot of information about how the fire moved. It was very heavily studied, and therefore gave us a much better understanding about how some of these fires work. One of the things that's been developed over the last 20 years is our understanding of what we call post-fire erosion. You can get quite major flooding sometimes after a fire, because of the fact that the fire has stripped away the vegetation, and a lot of the binding roots might have been killed. A lot of sediment can move very quickly.

It's something we see in the fossil record as well. It's possible some of the large dinosaur bone beds might be related to post-fire erosion. In other words, those massive floods after a fire could have entombed some major dinosaurs.

How are wildfires changing?

Small changes in climate can have a dramatic effect. In the western United States the snowmelt is coming slightly earlier so vegetation dries out earlier, and the fire season is longer. And where I live in southern England, which is not necessarily renowned for its forest fires, it will only need small changes in when rain occurs for there to be longer periods of dryness, where you are likely to get more fires. And, as we’ve introduced plants in areas outside their natural habitat we’ve exacerbated the issue. We need to think carefully about building in these flammable landscapes. We need to have a real debate: Do we want to put lives at risk putting out these fires?