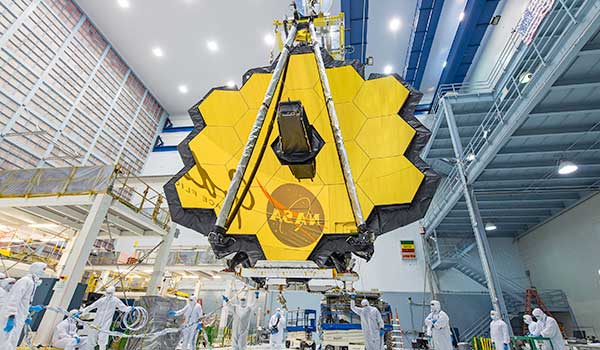 The James Webb Space Telescope, the much anticipated, revolutionary newcomer to the pantheon of space telescopes, is finally set to make a big splash—a welcome change from the waves its oft-delayed launch and ballooning cost have made. After several holdups this year, NASA is set to launch the craft on Christmas. The telescope’s takeoff has now been delayed a decade, and its cost has risen roughly $9 billion over budget. Lawmakers and scientists both have expressed concern that the project is siphoning funds from other research areas, but many other scientists say that Webb is worth the money and the wait.

Webb’s conception is inspired by the Hubble Space Telescope—the 31-year-old observatory famous for capturing stunning photos of our universe's galaxies. But Webb picks up where its predecessor falls short, says Eric Smith, Webb’s program scientist and chief scientist of NASA’s Astrophysics Division. There’s really no telescope like Webb so far, he says. The new observatory, which is slated to launch from northern French Guiana near the equator, is a joint collaboration between the space agencies of the United States, Europe and Canada. "When you see Webb go into space, ... it's the whole force of human creativity and all kinds of disciplines that push it there."

This latest space-bound contraption is unique because of two capabilities. First, it’s big, with a 21.3-foot primary mirror that will make Webb the furthest-seeing telescope humankind has ever built. Secondly, Webb views the universe in the infrared—the zone on the electromagnetic spectrum with slightly longer wavelengths than visible light. It will be the only infrared-specialized telescope in space that can see long distances. Its closest challenger, Hubble, works primarily in the visible and has a limited infrared-viewing range.

“Anytime astronomers get a new telescope, it's a kid in a candy store kind of thing,” says Smith.

Partially thanks to Webb’s size and infrared gaze, here are five things the telescope will allow astronomers to do.

“One of the big purposes of telescopes is actually as time machines, because distance is look-back time,” says Daniel Eisenstein, an astrophysicist at the Harvard–Smithsonian Center for Astrophysics. Eisenstein will use Webb’s cameras to “time-travel” back to when the earliest galaxies were forming right after the Big Bang.

When we look at a distant galaxy light years away, we aren’t seeing it in its most recent state. Its distance in light years translates to the number of years it takes for its light to arrive to Earth. For example, the closest galaxy to ours is the Canis Major Dwarf Galaxy which is 25,000 light-years away, so its light takes 25,000 years to reach Earth. That means when we look at Canis Major Dwarf, we’re seeing it as it was 25,000 years ago.

The further into space scientists can look, the further back in time they can observe a galaxy. Webb, being the farthest seeing telescope yet, can root out the youngest looking galaxies humanity can observe. To understand the formation of galaxies, scientists like Eisenstein will look at several galaxies at different life stages and piece together their developmental timeline.

Webb’s infrared capabilities are also crucial for observing these galaxies. Light from distant galaxies will be stretched out by the expanding universe. By the time the light reaches our telescopes, its original wavelength will have shifted from the visible or ultraviolet to the infrared. Luckily, picking up infrared signals is right up Webb’s alley. “It's the first time we've had a large, cold telescope in space that can observe these infrared wavelengths,” says Eisenstein.

The Hubble space telescope has managed to capture the shortest wavelength infrared rays stretched from the bluest of light of faraway galaxies. The retired Spitzer infrared telescope was much smaller than Webb and couldn’t see as far into space. Webb will knock it out of the park in terms of how deep into space—and how far back in time—it can catch distant galaxies in the act of growing up.

Detect possible chemical signatures of life on other planets

If life exists outside of Earth, it will release distinct chemical signatures, such as by breathing carbon dioxide and photosynthesizing out oxygen, that can transform a planet. Analyzing the chemicals in a planet’s atmosphere will not only allow scientists to look for life, but also enable them to assess a planet’s habitability.

Webb can detect infrared wavelengths for fingerprinting chemicals such as water and methane present in the atmosphere of exoplanets, which are planets beyond our solar system.

Webb contains two instruments that will allow scientists to unravel the wavelengths of infrared signals from solar systems beyond ours—to unweave the colors of the infrared rainbow, so to speak. When an exoplanet photobombs a star that our telescopes are gazing at, the starlight will experience a dip in certain energies corresponding to the chemicals in the exoplanet’s atmosphere. If Webb happens to be looking at the right star at the right time, it can chemically analyze the atmosphere of the star’s planet by analyzing the blip in the starlight.

“Exoplanet science as a field is pretty new,” says Munazza Alam, an astrophysicist at Harvard–Smithsonian Center for Astrophysics. Since the first exoplanet discovery in 1992, scientists have found thousands of exotic planets teeming in the universe. “They’re everywhere,” she says.

However, humanity’s understanding of these exoplanets has barely extended beyond the fact that they’re there. It’s challenging for current technology, such as Hubble or on-Earth infrared telescopes to carry out infrared spectroscopy on new exoplanets of interest. Hubble works with a much narrower band of infrared energies compared to Webb. Ground observatories are shrouded in Earth’s atmosphere, which itself is an absorber and scatterer of infrared light. The Earth also emits background infrared radiation that would overwhelm the faint signals coming from the deep cosmos. In space where Webb will be, Earth’s atmosphere and warm radiating surface are out of the way for an unobstructed view of the night sky.

Alam will be using Webb to survey a motley of Jupiter and Neptune-sized exoplanets, and she’s excited to get started. “We're really just at the tip of the iceberg.”

Watch the birth of stars

The birthplaces of stars are full of dust. While they make for breathtaking photos, the dust blocks scientists from peering right into the heart of these clouds when they look at them with visible light. Luckily, infrared light from stars can penetrate through the dust to give scientists a whole new take on an old view.

“Red light can pass through the dust in the Earth's atmosphere better than the shorter wavelengths, the blue lights,” says Marcia Rieke, an infrared astronomer at University of Arizona who is the principal investigator of one of Webb’s infrared cameras. The same principle explains why infrared light can penetrate even further through dusty galaxies than visible light. “If you look at the setting sun, it tends to look much redder than when you look at it in the daytime; it's the same thing.”

Young stars emerge from the dustiest pockets where it’s most challenging to see through. Thanks to Webb’s high infrared sensitivity and spectacular resolution, scientists might be able to sift through the dust to make out these infant stars with unprecedented detail. And Webb might help scientists figure out how the dust cooks up a star, why stars form in clusters and how planets form around a star.

Nothing can escape a black hole, not even light; so technically, black holes are invisible. Luckily, swirling around black holes is plenty of stuff we can see—stars, dust and entire galaxies. To study black holes, scientists scrutinize this stellar menagerie, similar to studying a shadow to learn about its shadow-casting object.

In the past, scientists have used X-ray telescopes to study specific kinds of physics of black holes. These telescopes look at phenomena that are millions of degrees hot and high enough to produce X-rays, such as the violent shredding of stars wandering too close to a black hole. Webb’s infrared instruments will allow scientists to see different goings-on in a black hole’s corner, particularly, the cooler gases and stars dancing around their invisible neighbor.

Where stars congregate is a dusty place; luckily, Webb’s infrared eye will allow scientists to peer past the dusty curtain and see through it all. Webb will provide valuable data to peek into the temperatures, speeds and chemical compositions of the stellar cloaks of black holes. Scientists can use this data to learn more about the mass and size of the black hole, and more about how it snacks on a star.

Be surprised by unexpected discoveries

Webb will be the first telescope of its kind in terms of its size, sensitivity and wavelength range altogether. With its capabilities, a good chance exists scientists will get to see something they’ve never seen before.

“There's, of course, what we don't expect, and that'll probably be the most exciting,” says Rieke. Maybe a phenomenon that completely overturns existing theories about the universe, she suggests.

Like many scientists crossing their fingers for Webb’s successful launch, she’s impatient for Webb to leave. “I want it to get launched and I want to start getting the data, because I'm not getting any younger.” Rieke has been involved in Webb’s conception since 2001, and was also a co-investigator of Hubble’s infrared instruments from the 1980s to the early 2000s. “And I'd like to have all this done before I decide it's time to retire.”

She had expected to retire five years ago, but Webb’s launch delays convinced her to delay her own retirement. Now with Webb’s launch seemingly inevitable, she hopes she can complete in four years a study on the universe’s very first galaxies, after which she will finally take her long overdue break. But, she says, if she finds something entirely new and mind-boggling, she might just be willing to put off retirement for a little bit longer.

Editor's Note: This article was updated to show that the James Webb Telescope's launch has been delayed until December 25, 2021.